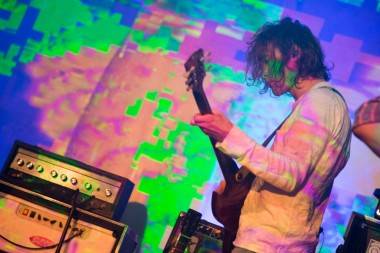 From the press release: “Performing live as a five-piece,Â MGMTÂ continue to entertain through multiple TV appearances (including covering Pink Floyd’s ‘Lucifer Sam’ on Jimmy Fallon in while decked out in hardened fisherman’s gear), a steady stream of music festival performances around the world, curating the latest edition of the Late Night Tales music compilation, and remaining precocious and curious under-30 wunderkind. Via their recorded music medium, the endlessly experimental and spontaneous duo have stayed true to their precarious nature.

“In November 2011,Â MGMTÂ performed two nights at the Guggenheim Museum in New York City, creating a unique musical performance to coincide with the opening of Maurizio Cattelan‘s career retrospective All – an installation of over 100 art pieces dangling from the museum’s ceiling through its legendary inner spiral space.”