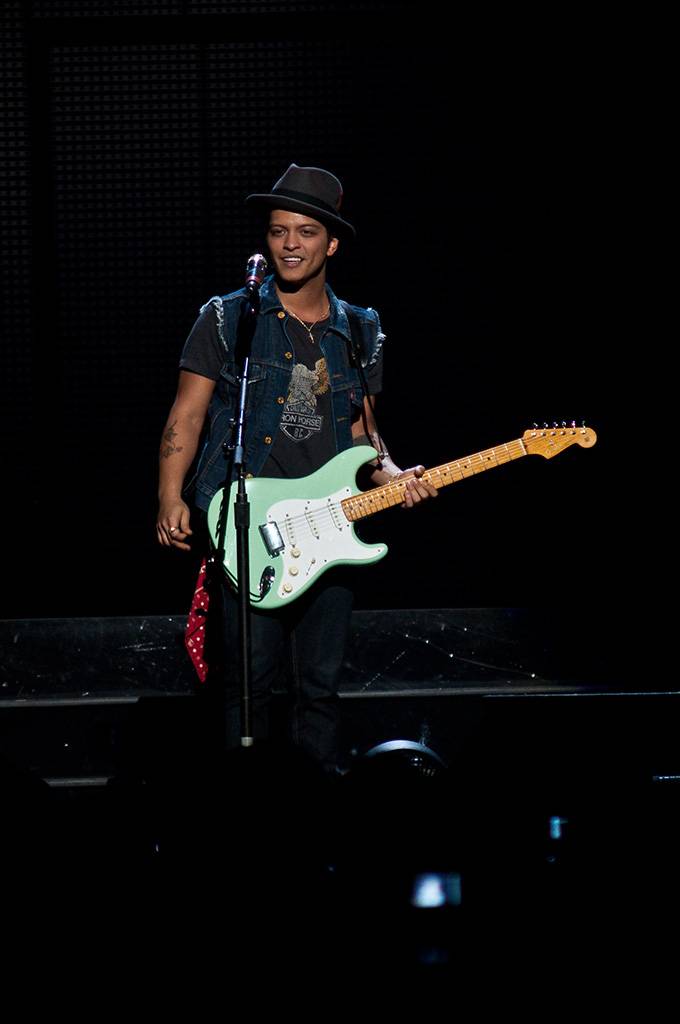 Janelle Monae and Bruno Mars have recently teamed up on a North American tour. Last night, the reigning pop chart champs brought their modern take on R&BÂ  to Vancouver.

The throwback artists made for a perfect combination, drawing in older fans with their Motown roots while simultaneously catering to teeny boppers and bottle poppers with their edgy looks and indelible hooks. Hundreds of kids with poster boards and painted faces walked hand in hand with their chaperoning parents to Rogers Arena, both generations ready to sing their hearts out (which, believe me, they did. My ears have yet to recover).

While searching for my seat in the lower bowl, Mayer Hawthorne was on stage playing a very close interpretation of Hall and Oates‘ “You Make My Dreams Come True”. The young, urban artist then introduced the audience to the Errol Flynn dance, in preparation for the soulful night ahead. The trademark move is a staple in his home of Detroit (it entails raising your open palm in the air and doing a 180 degree turn of your wrist – simple yet effective).

The charming crooner flirted up a storm with the overwhelming amount of ladies in the audience, and my guess is that a few of them may have wandered over to Fortune Sound Club later in the night to catch his DJ set. 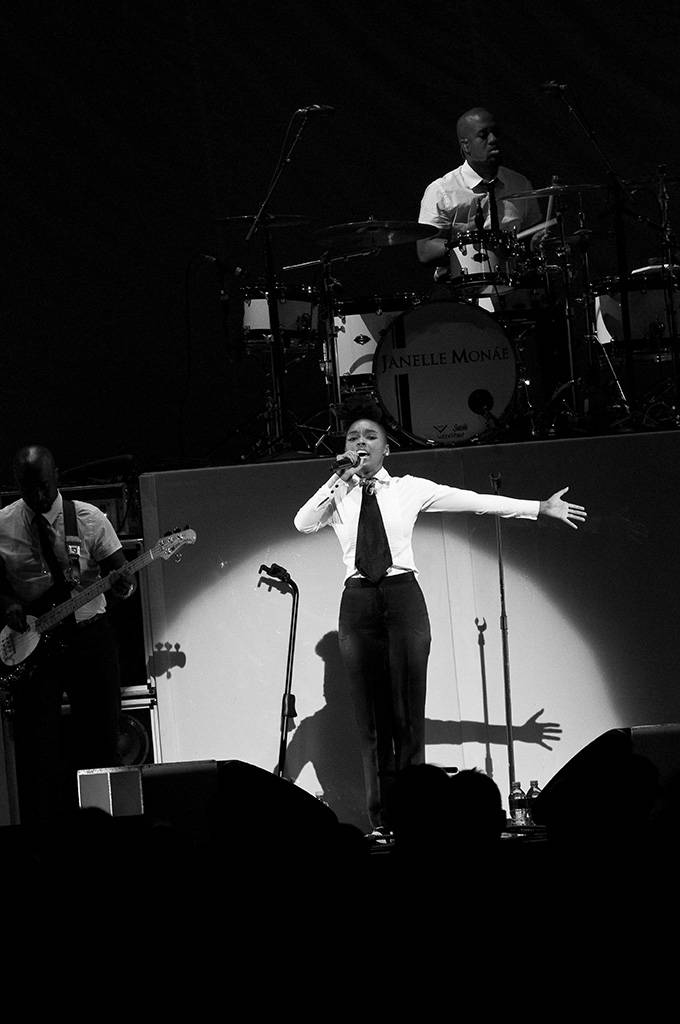 House band and crowd boosters The Hooligans prepped the audience for the ultimate chameleon, Janelle Monae. An eerie, symphonic overture led into the Afro-Cuban inspired “Dance or Die”, highlighting Monae’s diverse musical influences and, I might add, impressive rapping skills. Apart from Monae, who sported her signature coif, black pencil pants and matching tie, the entire band was decked in white suits, contrasting the multicoloured backdrop. The whole production felt like the psychedelic tunnel scene from Willy Wonka and the Chocolate Factory. It was obvious from the get-go that this was going to be one theatrical and unforgettable performance. We were very far from Kansas, Monae’s home state.

Things only got trippier as the show progressed. On “Mushrooms and Roses”, the bright-eyed artist belted out the psychedelic rock tune while painting a voluptuous fanny (the American definition of the word, not the British) on a blank canvas. She also threw in a couple of covers, including a jazzy and controlled rendition of Charlie Chaplin’s “Smile” and a dead-on impersonation of Michael Jackson on “I Want You Back”. On “Cold War” and “Tight Rope”, fans were treated to her slick dance moves, including a James Brown sidewards shuffle and slide. She even donned a velvet embroidered cape at one point, just like the Godfather of Soul. 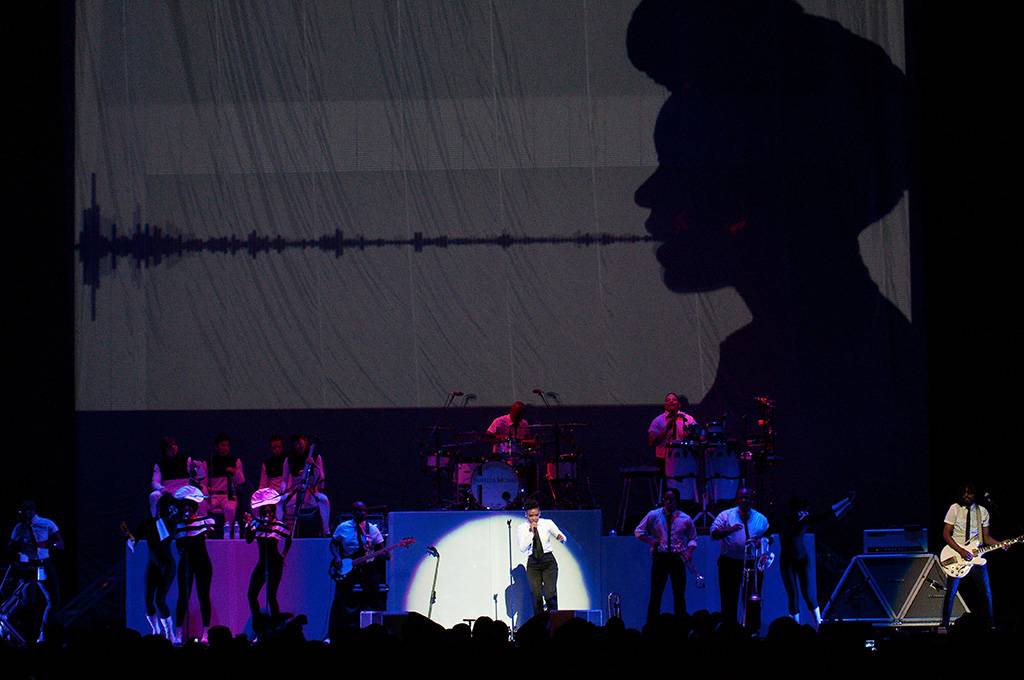 Most of these tracks can be found on her first full-length record, The ArchAndroid, which includes a hodgepodge of collaborations with musicians like Big Boi of Outkast to burlesque-indie artists Of Montreal. At times baffling, but mostly mind-blowing, Janelle Monae is an exciting emerging star that isn’t afraid to do away with genres, labels and “normal” identities. Lesson learned: expect the unexpected with this one.

Mr. Bruno Mars, the man responsible for dethroning Zac Efron, Jesse McCartney, and the Jonas Brothers as teen heartthrob, hit the stage next. Dressed in a fedora and cut-off denim vest, and flashing his lime-green Strat and matching pearly smile, Mars knew exactly what his fans paid to see and made sure to give them one heck of a time. Even covered in darkness for most of his opening song, the born performer had all the women eating from the palm of his hands with his velvety vocal runs and Usher dance moves.

A sucker for doo-wop, I found myself swooning to his a cappella cover of the Cleftones‘ 1950s serenade “Please Say You Want Me” which led into his better known hit “Marry You”. Sampling more from the past, Mars played a bluesy rendition of the Beatles‘ “Money”, indulging the more mature sector of the crowd. The squealing intensified with the slow and seductive “Our First Time”. I could hear panties dropping and bras twirling as he sang “You’re so delicious, like ice cream on a sunny day, gonna eat you before you melt away”. Fans joined in on his poppy hits “Just the Way You Are” and “Grenade”, and a few of the young un’s gasped at the expletives on “Billionaire”.

His top 40, bubblegum reputation aside, Bruno Mars proved that he’s a talented musician with mad pipes. Sure, some of his lyrics lackedÂ  some substance (he sings “You can count on me like 1,2,3” on one of his tracks), but he more than made up for this shortcoming with his warm personality and charisma. I’m very happy to add him to my long list of guilty pleasures. 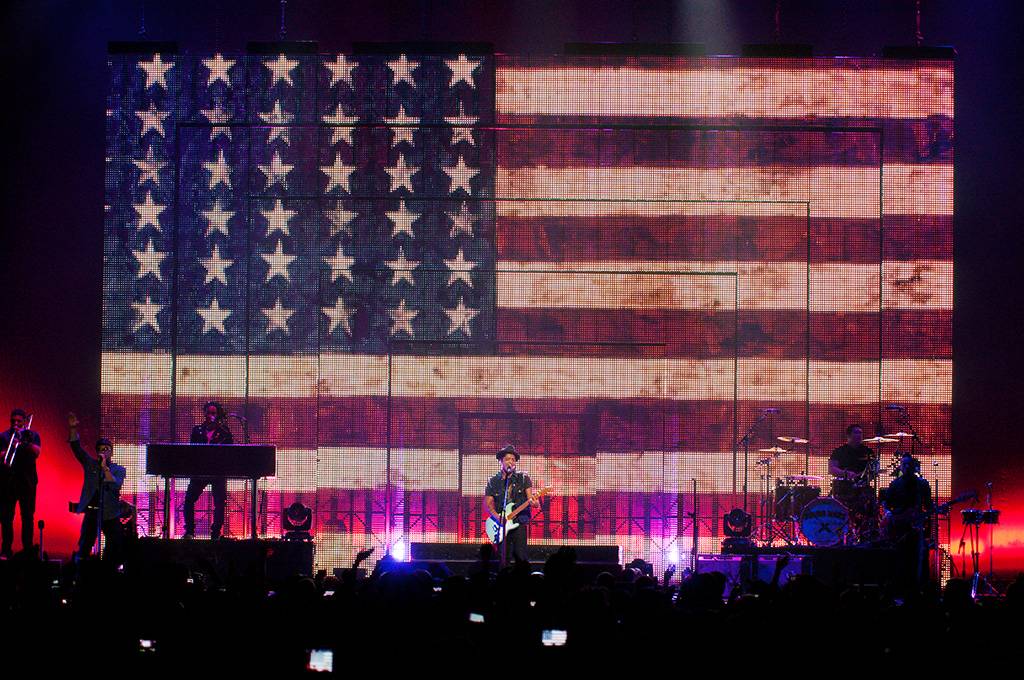