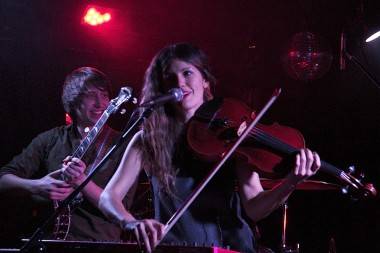 Talkdemonic was part of a Portland double bill Friday at the Biltmore Cabaret in Vancouver. The show was part of a West Coast tour that took the group from Oregon to Vancouver and back down to Washington for shows in Bellingham and Seattle with fellow PDX band Helio Sequence.

Both bands are also duos, although in the case of Talkdemonic, drummerÂ Kevin O’ConnorÂ and violinistÂ Lisa Molinaro were touring with two other musicians. According to Katie Summer, writing in the Portland Mercury about a recent Feb. 4 show the band played under the name “VioHazard”, the two additional members areÂ Jay Winebrenner on bass and Dustin Dybvig on banjo and synth.

In her review of the show, Summer writes that Winebrenner and Dybvig “elevated their [the band’s] already sweeping sound, and the group dynamic was on point. Every song sounded devastatingly full and rich, a quality that laptops can’t always achieve. They’re onto something great–an orchestrated pushing and pulling of the heartstrings–I was riding the high of this show for a few days.”

The group is touring in support of its 2011 album Ruins. O’Connor started Talkdemonic as a solo project, but invited Molinaro to join after releasing one album and touring with the violinist’s backing tracks for accompaniment. Molinaro joined in time for the second Talkdemonic album, 2006’s Beat Romantic.