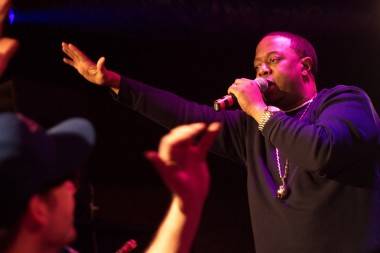 Writing of the show forÂ Exclaim.ca, Alan Ranta said, “Knowing exactly where he was, Gab worked hockey and the maple leaf into his encore freestyle battle with Vursatyl, who held his own but was ultimately outmatched by Gab’s upper echelon skills. Whether they still have blogosphere hype power behind them or not, it is certain that Blackalicious haven’t lost a step.”

Last year, the duo reissued their 1994 debut EP Melodica. Pitchfork said, “This re-release ofÂ MelodicaÂ is the first official digital edition, as well as the first effort to consolidate all the tracks, instrumentals aside, that made it onto both the Solesides original andÂ Mo WaxÂ import editions of the EP. As a reissue, it’s definitive, but as a time capsule, it’s crucial: As an early installation of what would be one of California’s most prominent components of the scene,Â MelodicaÂ is an appealing example of what independent rappers could pull off once they got the notion that they didn’t have anyone else to answer to but themselves and their fans. This is conscious-minded, lyrically technical underground hip-hop at its rawest and, sometimes, at its most over-the-top ridiculous.”