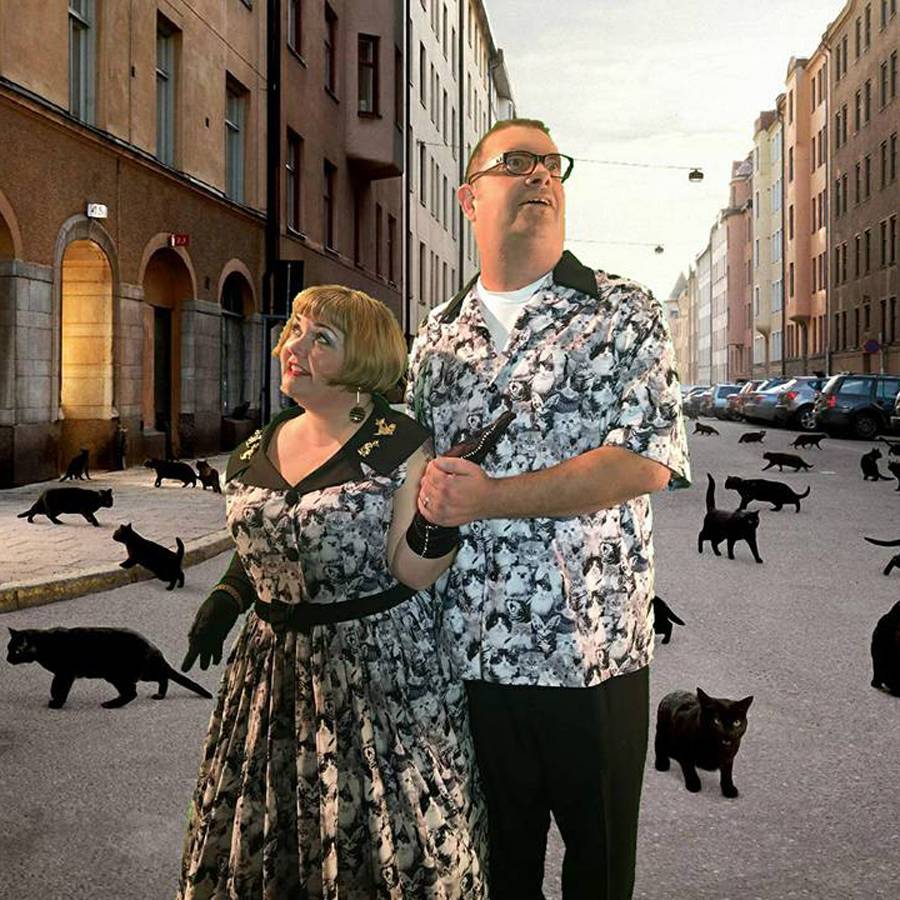 WhatÂ band are you inÂ and what you do you each play?Â

What are your cats’ names?Â Rosie and Hank (MacAskill) 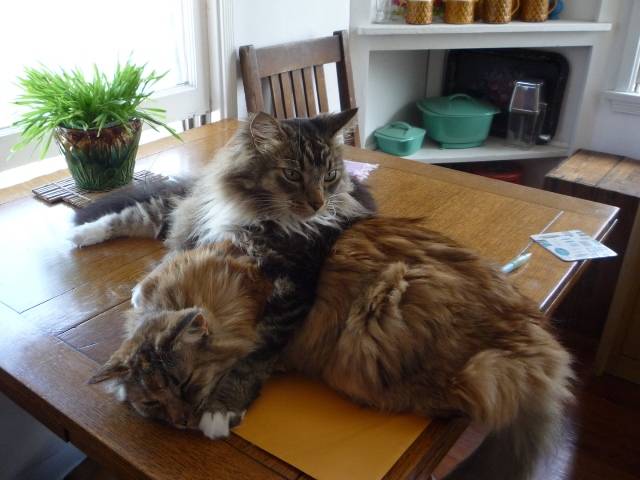 I (Jaye) found Rosie as a kitten on a sidewalk in North Hollywood in July of 2003, shortly after I moved to California from Brooklyn. She did the “I’m with you now” routine so I had no choice but to take her back to my grandparents’ in Orange County where I was staying temporarily. What was weird was that less than fiveÂ minutes earlier, I had been telling the people who I was visiting about how my old cat had recently died of old age, and that I was planning to get a new cat soon but definitely not a kitten – because kittens were too crazy and I couldn’t handle it. So, then I walk out their front door and she’s sitting beside my car all by herself, and all of a sudden I have a brand new kitten!

Anyway, after a couple of months as an only cat, she was getting pretty bored and ornery. By that time I had moved to San Diego and was about to start grad school. The pet store beside the place I was working had kittens – I know you’re not supposed to buy animals at pet stores, but Hank was so cute and it was love at first sight. I adopted him to be Rosie’s little brother, and they’ve been together 13 years now. They love each other but I think Rosie might love him a little less than he loves her sometimes. He’s a typical pesky little brother… By the way, it’s a bad idea to get kittens just as you’re starting grad school; they don’t help at all. 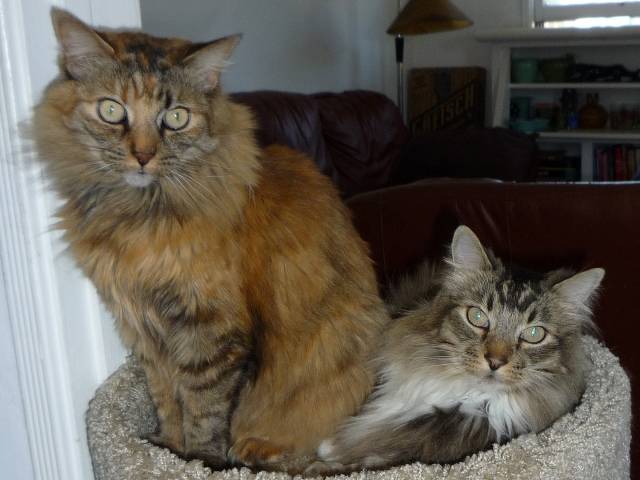 Who feeds your cats and what do they usually eat?

I (Jaye) feed them most of the time but Joe does sometimes too. Rosie and Hank recently had to switch to a prescription diet because they’re getting old. Along those lines, Rosie has a little half-and-half with Miralax every morning to help keep her regular.

Rosie has three theme songs: “Rosie” by (Vancouver’s own) The Smugglers; “New Rose” by The Damned; and “Here Comes Rosie” by The Cavedogs. If Hank (who was kind of named after Hank Williams) had a theme song, it would probably be “I Think Hank Woulda Done It This Way” by the Blue Chieftans.

Most impressive thing your cat has murdered?

If your cat sees a giant spider, what is the course of action?

They usually alert me to the situation. If it is too big and scary looking, unfortunately I end up having to kill it. We live in Southern California (San Diego) and some spiders are poisonous. I don’t like to take any chances with the cats getting poisoned.

Where is the last inconvenient place your cat has fallen asleep?

We have what I call “Chair Wars” around here. Joe and I both work from home. If I get up from my chair in front of the computer for even a second, Rosie will take it from me. So I end up having to sit in the “other” chair. Then when I get up again, Hank usually jumps into that one, so then I have to go get a chair from another room… And then Rosie sleeps between my legs every night, all night long. Sometimes she likes to get really “all up in there.” It’s like having a hot roasted chicken, fresh out of the oven, between my legs all night long. It’s just too hot!!! 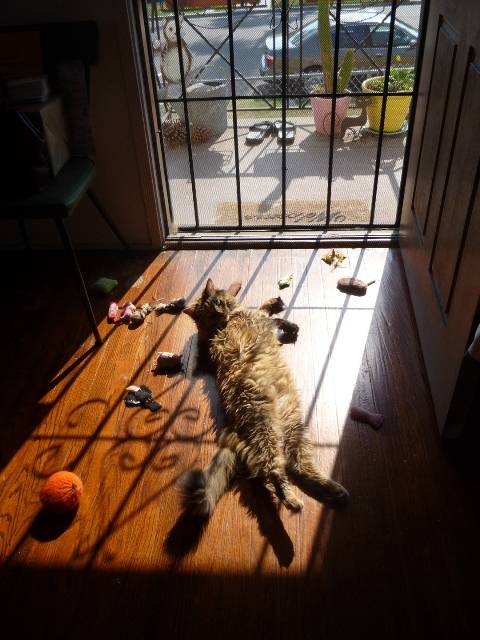 If your cats threw a raging party, what are the staples on their playlist?

Rosie and Hank are big jazz fans but we’d like to think our new album Cat SoundsÂ would somehow make it onto their playlist. They were the inspiration for the song “Cats Chasing Cats,” which ultimately gave us the idea to make a whole musical-comedy album all about cats. Like most cats, they like to run around like maniacs and tear it up from time-to-time. 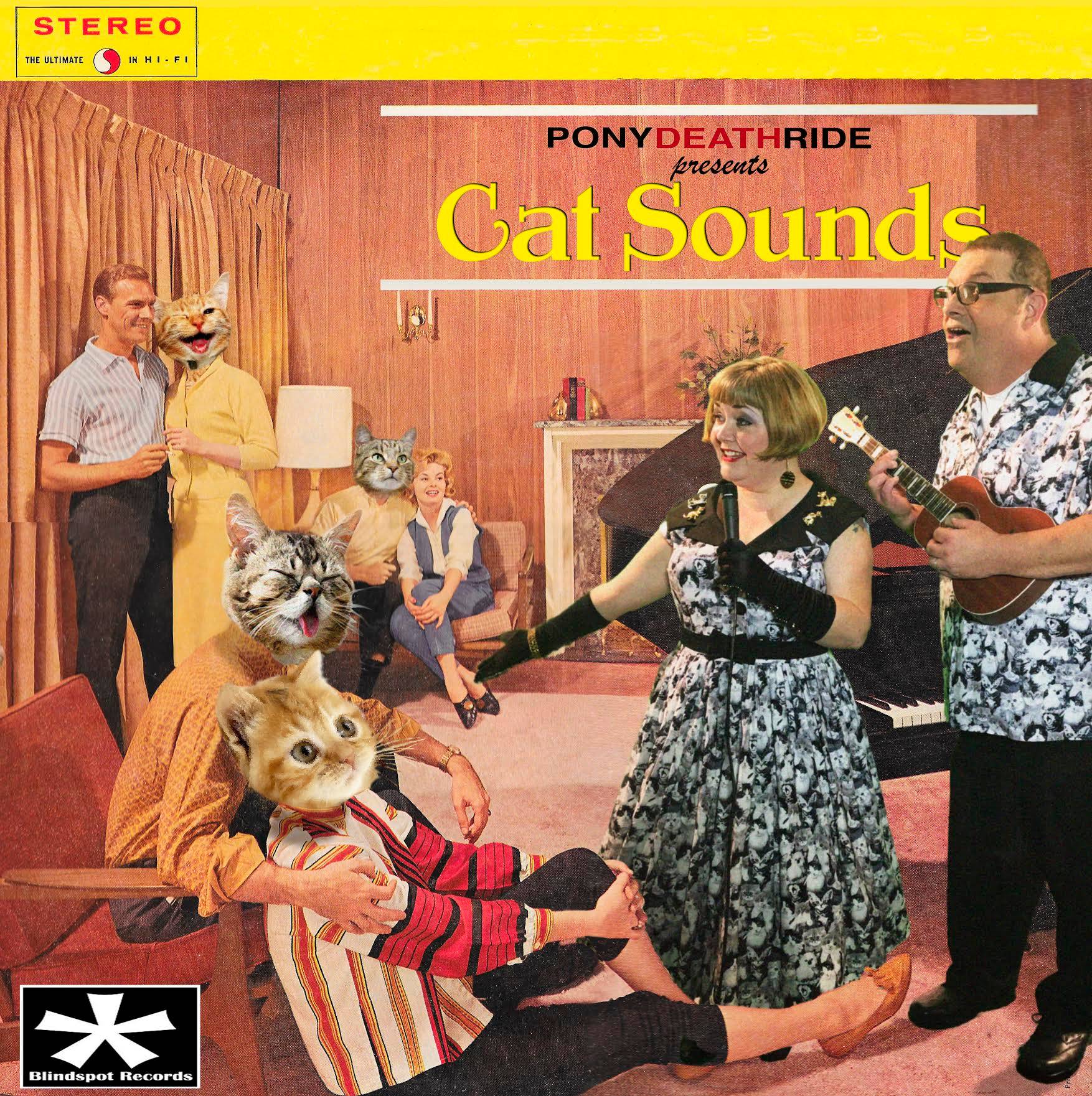 If you were in a freaky Friday scenario… what would they do?Â

Rosie and Hank would use their newly acquired human thumbs to remove all the closet doors so they could go inside whenever they wanted and not get locked in accidentally.

WhatÂ would you do?

Payback time! Joe and I would wake them up early by jumping up on stuff we’re not supposed to, knocking shit off the dresser, and pounding our paws against the closet doors to get in. Then throughout the day I’d keep grabbing Rosie’s pants legs with my claws and see how much she likes that, and then steal her chair just as she was about to sit down… Joe says he would also go to the bathroom outside (which even our cats don’t get to do since they are indoors only.) 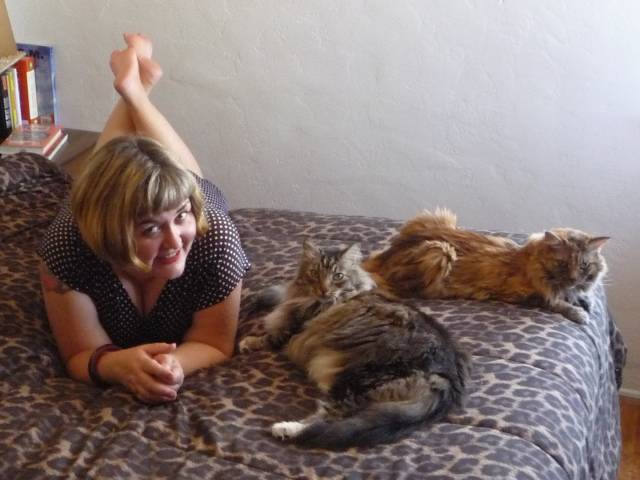