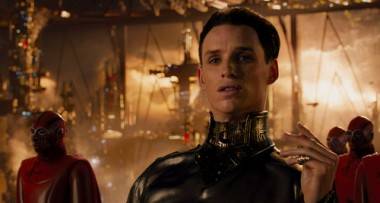 Eddie Redmayne in what is safe to say is not a career high, Jupiter Ascending.

In Jupiter Ascending, Channing Tatum plays an albino half-wolfman that kicks ass and skates around goofily on antigravity rollerblades. And despite that, and a universe of inventive CGI and dense world-building, somehow this should-be screaming space opera from the WachowskisÂ (The Matrix) is mostly just a plodding two-hour bore.

Mila Kunis stars as Jupiter Jones, a toilet-scrubbing housecleaner who begins every morning voicing how much she hates her life. But it’s not long before she’s whisked off into space and discovers that she might be the reincarnated member of a royal family of seemingly ageless aliens. (Spoiler: she probably is, and the film’s plot only builds cliche upon cliche after that.)

Tatum is Caine Wise, the aforementioned albino half-wolfperson, and Jupiter’s bodyguard. Academy Award-nominee Eddie Redmayne is terrible and hilarious as the film’s heel – Balem Abrasax, one of the royal ageless aliensÂ – and delivers most of his lines like a severely asthmatic old man. 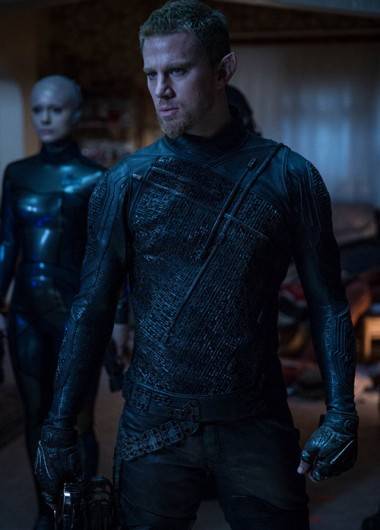 When Andy and Lana Wachowski‘s latest sci-fi space opera epic was yanked from its summer blockbuster release date and dumped in the winter wasteland, it seemed unlikely that the filmmaking siblings’ latest was going to find success at the box office.

But even though their last two films,Â Speed Racer and Cloud Atlas, both bombed, they remain ambitious, interesting (and flawed) films. Hopes were high that the Wachowskis could pull off a big-budget space opera and create something unique – especially working in a genre where many auteurs have taken abuse for turning their high-concept visions into cinematic cosmic messes, from David Lynch‘s Dune to Luc Besson‘s Fifth Element.

And Jupiter Ascending is pure space opera. It’s got inventive world-building – a cosmos filled with humanoids-spliced-with-animals – and a giant budget to bring to life that universe, with all itsÂ spaceships, planets, and blockbuster action. But its by-the-numbers plot doesn’t have a single surprise plot twist or much of anything to get excited about story-wise. Even the film’s mythology is just The Matrix reheated in a cosmic fairy tale dress.

In fact, the film’s best sequence breaks from the space-action toÂ slow to a funny, frustrating crawl in a bureaucratic hell-planet, with a brief cameo by bureaucrat-mocking filmmakerÂ Terry Gilliam, playing a steampunk tattoo registrar.

Jupiter Ascending’s shortcomings aren’t the fault of its two leads. Kunis is fine as the plucky heroine and keeps the cosmic goings-on grounded. The problem is her character has nothing to do except be ‘splained at and to be saved, damsel in distress-style, until the film’s final minutes. The chemistry between Kunis and Tatum is also a nice surprise – but they’re not given enough to create anything memorable. 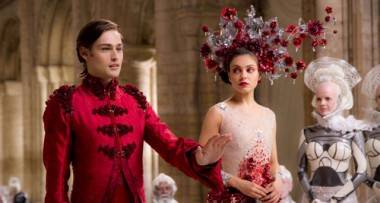 One of the centralÂ action scenes of the Jupiter Ascending happens in the first act. It’s a noisy rollercoaster of a chase scene that follows Jupiter, Caine, and his rocket boots, from Chicago’s skyline, down and through its streets, resulting inÂ Michael-Bay-sized damage inflicted on theÂ city. It’s followed by a scene with the two leads driving away, and Caine explains to Jupe that the aliens will quickly repair the damaged city and wipe everyone’s memory of the incident. There’s not a better piece of imagery to sum up Jupiter Ascending than the destroyed city viewed in the rearview: a mostly-forgettable mess. 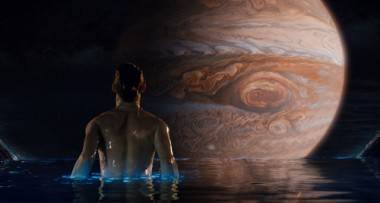