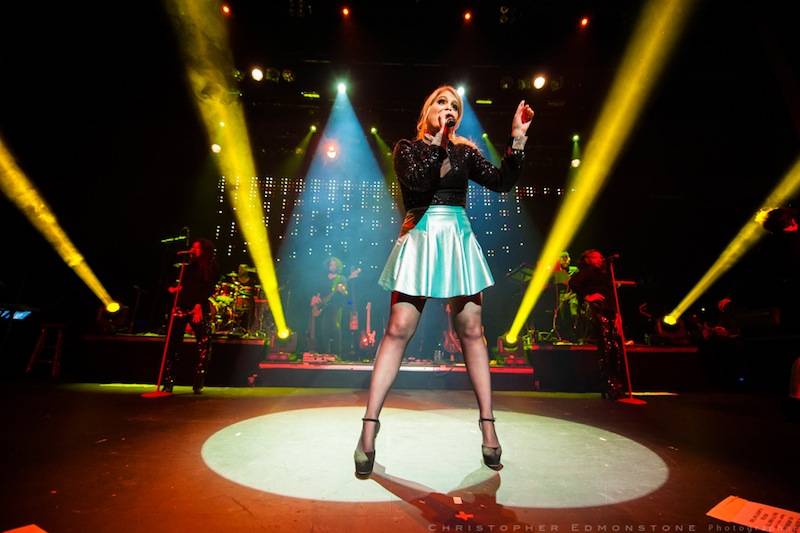 After placing a crowned headband on the audience member’s head, Trainor walked around stageÂ hand-in-hand with Sophia to cheers from the amped-up crowd. After taking a selfieÂ with the Top 40 vocalist, Trainor’s guest left the stage. “Every show I’m gonna have a queen like that,” said the 21-year-old singer/songwriter from Massachussetts.

Trainor’s That Bass Tour launched its first show at the Vogue Theatre in Vancouver, BC on Wednesday, Feb. 11. The singer is riding high – herÂ debut album, Title, was released on Jan. 13 by Epic Records. Thanks to its hit single “All About That Bass”, itÂ won her the top spot on the Billboard 200 chart with 195,000 units sold. This makes Title the “biggest debut for a female pop artist’s first full-length album in over five years,” according to Billboard.

A songwriter by trade*, Trainor has, thanks to the single, been pushed into the spotlight. For an untested performer, though, she acquitted herself with charm, bodingÂ well for the rest of the tour.

She opened the show with “Dear Future Husband”,Â whichÂ set the mood for the rest of the evening. Slow to start, the song pickedÂ up speed and offeredÂ sassy lyrics like, “You got that 9 to 5/But, baby, so do I/So don’t be thinking I’ll be home and making apple pies.”

Besides stunning vocalsÂ – to whichÂ “All About The Base” hardly paysÂ justiceÂ -Â and theÂ upbeat, reggae-bluesy-funk-type ’60s soul music, courtesy ofÂ aÂ five-member band and four back-up singers/dancersÂ -Â one of the best parts ofÂ Trainor’s showÂ were her interactions with her fans, or “Megatronz” as they’reÂ dubbedÂ on social media.

SheÂ made a point of engaging with all sides of the stage, and more than once pointedÂ out an individual dancing and singing with vigourÂ among the seated balcony-goers.

Songs like “Dear Future Husband”Â encourage female growth and empowerment. So it was no surprise the air was dominated by scoresÂ of women and girls yelling and cheering in reply to questions Trainor shot out throughout the hour-long show.

“Have you ever ran into an ex-boyfriend,” Trainor said at one point,Â “and he lookin’ so good? And you bought him that jacket?” She then transitioned into her third song, “Credit,” to the crowd’s excitement. DuringÂ “Title”, a chorus of voices and cell phones sprang up from the audience to highlight the performance, which was completeÂ with Trainor’s silver glitter-decorated ukelele.

Of course, sheÂ left “All About ThatÂ Bass” untilÂ the end, as the last of her two encore songs. For the hit, the theatre exploded with colour, covering the gatheredÂ Megatronz with blue and yellow confetti. A final splash of Trainor flavour to a solid performance.

*By 17, Trainor had released three albums on her own. She wrote her first song at age seven. Her songs have been recorded byÂ Rascal Flatts, Hunter Hayes, Common Kings, and Hot Chelle Rae singer Ryan FollesÃ©.