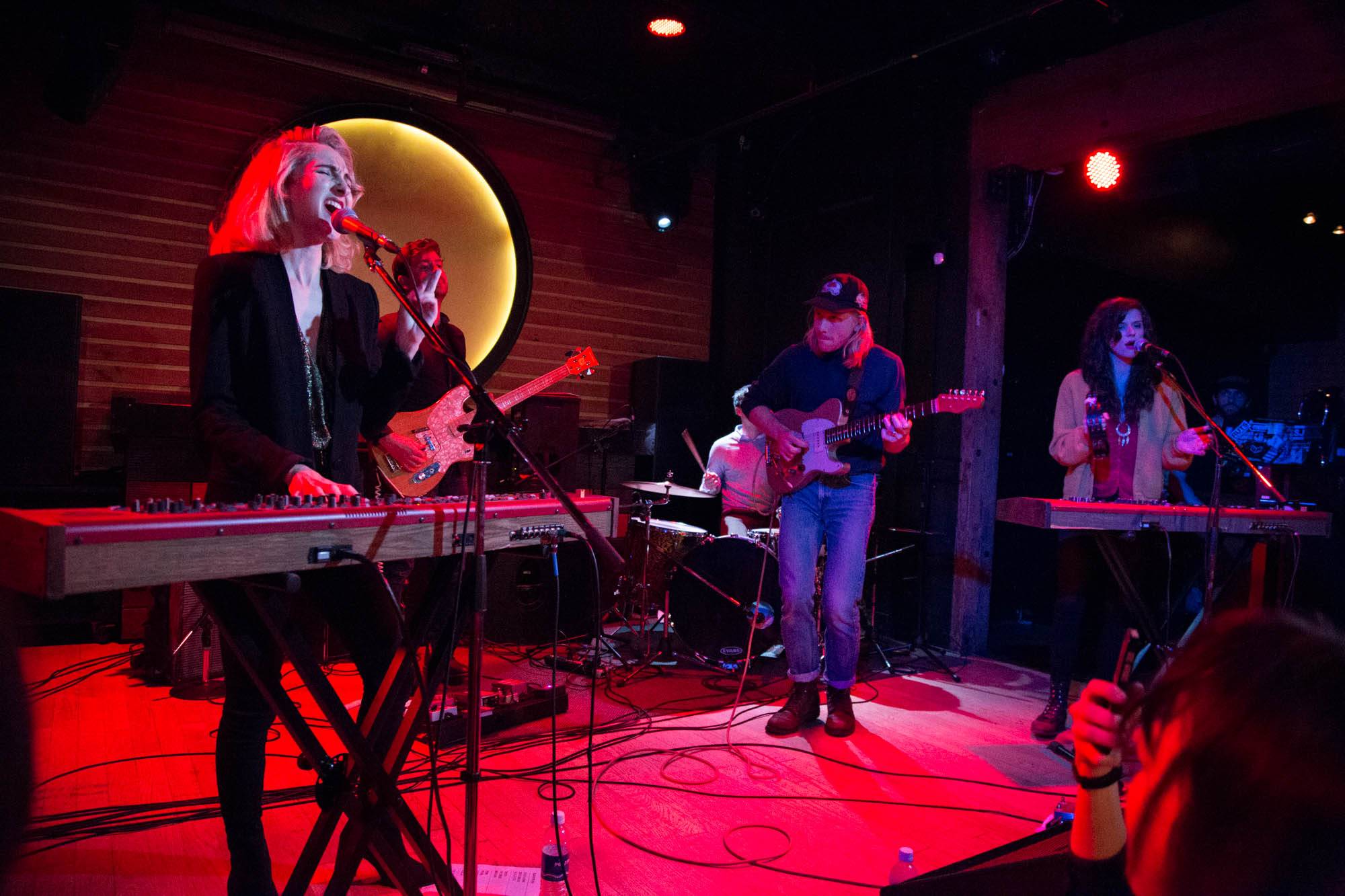 Alaina Moore may be just this side of waif-ish. But what the Tennis singer lacks in size she more than made up for in physical presence on Thursday night at Fortune Sound Club.

Following a set with their touring band, Moore and Patrick Riley,Â the husband-and-wife co-founders of the indie-pop band,Â returned to the stage for an intimate encore of “Bad Girls”, off of last year’s album Ritual in Repeat. The final song of the night was stripped down in more way than one: Moore had finally removed the blazer that she hadÂ wornÂ for the duration of the sweaty hour-long set, and was down to a glittery black backless deep-V top. Combined with her shoulder-length blonde bombshell hairdo, the musician resembled something between a tiny jewelry box ballerina, an ice skater and an ’80s pop diva. But the conviction with which she repeated the chorus line “bad girls, bad girls…” into a breathy climax left little doubt that she knew a thing or two about being a “bad girl” herself. And, although Moore had commanded the stage with her voice – simultaneously precious and strong – all night, our finalÂ impression was of aÂ powerhouse singer withÂ sexpot status.

For the rest of the night, the couple from Denver were joined onstage by a full band, including one unexpected special addition. For those who were wondering about the mysterious brunette lending back up vocals, percussion and synths for the first half of the night, Moore revealed her identity when she informed the audience that she was her old college roommate. Apparently it was Moore and Tiffany’s first time ever performing and singing together. For the second half of the set, Tiffany was at the merch table where Moore encouraged fans to go “flirt with her or give her cash.”

After playing a few more songs, including “Never Work for Free” (also off Ritual in Repeat), Moore acknowledged the packed venue again to offer her condolences for rescheduling their show. The performance was originally scheduled for October but had to be pushed back due to her laringytis. The crowd offered no signs of a grudge and were completely enraptured byÂ Tennis – a complete 180 degree turn from the prevalent sound of bored hubbub emanating from the room during local opening band The Shiloh‘s performance. Formalities aside, Moore continued, “Alright, let’s dance!” On queue the lights changed and the stage was flooded with red as the band launched into the groovy, bass-forward “I’m Calling”.

Overall, Tennis put on an unexceptional performance that was easy on the eyes (barring the distracting non-stop grinding, quad-busting dance moves from aÂ couple in the front) and pleasing to the ears. The steaminess of the room was welcome respite from a dreary night, and the warmth of the sound did wonders for the band and Moore’s warble. Heavy on new songs like “Timothy” and “Marathon”, the groupÂ was nonetheless able to seamlessly weave their older retro doo-wop material like “Mean Streets” (off 2013’s Small Sound EP) with their new, less genre-specific.