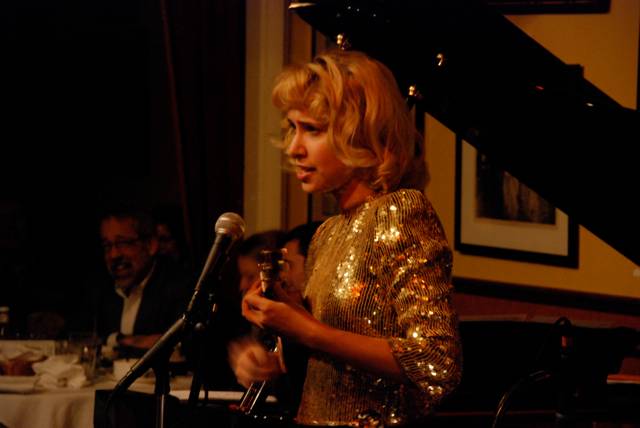 Nellie McKay slipped through the standing-room only crowd in a gold sequined top and a puffy black tulle skirt that stopped at her knees. She took her place at the piano, smiled under her canopy of blonde ringlets, and launched into “Won’t U Please B Nice”. At first, the song is reminiscent of the standard “Baby, It’s Cold Outside”.Â But when McKay sings “If we part, I’ll eat your heart…” you realize: sheÂ isn’t your typical songwriter.

With her genuine smile and golden voice,McKay is part sweetheart, humbly covering for forgetting the notes to a song with a joke and a smile. “I haven’t seen this many white people since Boulder,” she said at one point. But she’s a bigger part incendiary, with raw truths and shocking statements that kept the audience laughing. Her appeal lies in the balance of these two extremes, giving us unpredictable swings from all-American darling to profane 21st century libertine.

Touring to promote her latest album, Normal as Blueberry Pie – A Tribute to Doris Day, she enchanted the audience at Cleveland’s Nighttown jazz club and restaurant with Day songs such as “Mean to Me” and “Sentimental Journey”. When she stood up and sang along to her own ukulele playing, she admitted, “This part is supposed to be a French horn solo,” so she used her voice to mimic the deep tones of the French horn, to the roar of audience laughter.

By request she sang “Sari”, with lyrics she raps with amazing ease.Â From her 2004 debut album Get Away From Me, the songÂ mentions Monty Python, Phen-phen, Freud and, to everyone’s surprise, the f-bomb. But whether she’s rapping her own songs or purring a Doris Day hit, McKay is entertaining, original, and unforgettable.