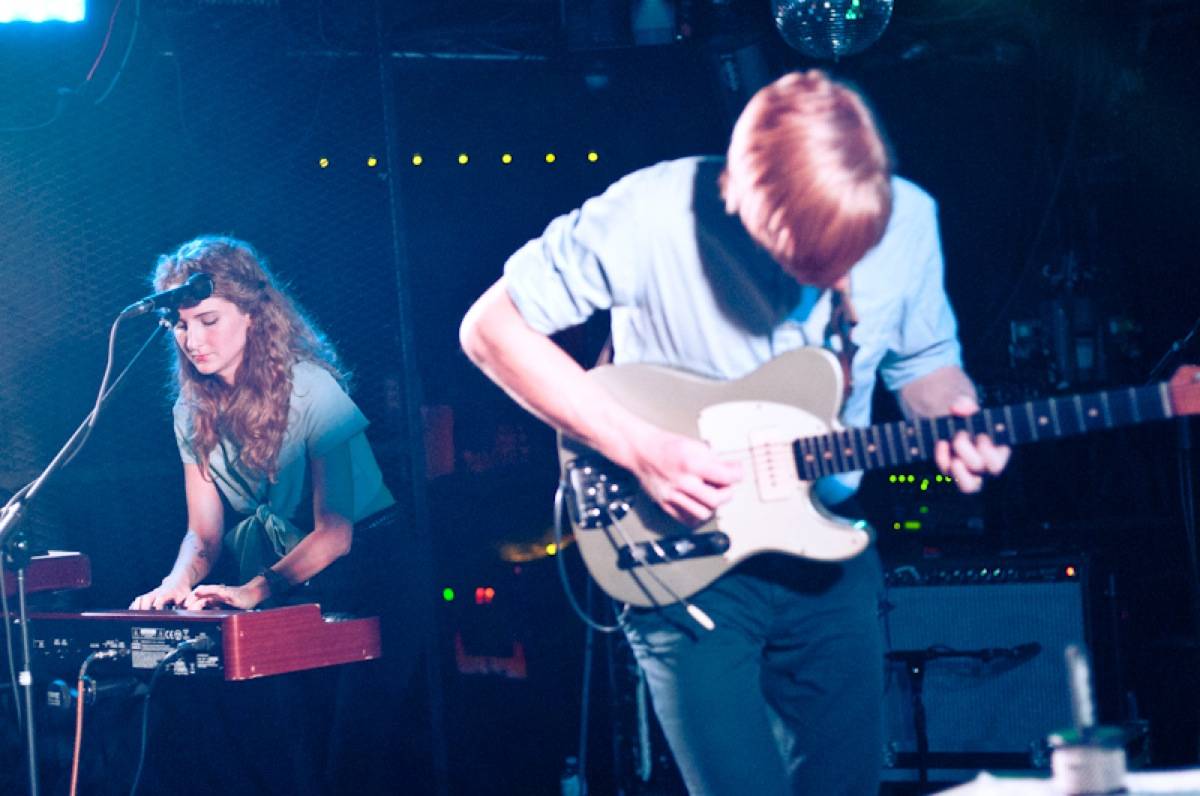 Photos and review—Tennis at the Biltmore Cabaret, Dec 13 2011

The story of ’60s pop revival group Tennis plays out like a modern-day indie fairytale. Denver musicians Alaina Moore and Patrick Riley first crossed paths studying philosophy at the same university and then decided to sail the Eastern Seaboard together for seven months upon graduating. Their getaway proved to be momentous in both their personal and professional lives – the pair nurtured their love on the open waters, got married over the course of their voyage, and documented their romantic adventure in one of 2011’s standout pop records – Cape Dory.

Knowing their history before arriving at their show at the Biltmore, I was interested to see how their chemistry would play out on stage. Like characters from a retro beach film, Moore (tiny as a church mouse) appeared in a simple blue button-down crop top, while Riley wore a matching colored shirt tucked in his navy chinos. Their endless-summer style, humble stage presence, matched with simple throwback love songs could break down even the most jaded individuals.

The couple would occasionally smile at each other, projecting mutual admiration and support through their glances. But for the most part, the big-haired and adorable Moore (think Sarah Jessica Parker circa Girls Just Want to Have Fun) closed her eyes while delivering calming and breathy vocals, while Riley slouched over his guitar, strumming musing and slurring surf riffs on his Telecaster. It was no over-the-top love fest like what we saw earlier this year from Neil Gaiman and Amanda Palmer.

The exciting part of the night came when the band previewed songs from their upcoming record. There are some slight deviations and exciting experimentation happening in their newer tracks. Perhaps we can thank the influence of producer Patrick Carney of the Black Keys for that. “Petition” brought out the R&B/Soul diva in Moore, and Riley bounced more animatedly behind a bass. Even the crowd’s dancing moved from finger-snapping and head swaying to hip-hop head nodding on this track. “Deep in the Woods” and “Origins” stay closer to the bright and endearing numbers heard on Cape Dory.

Ballads like “Pigeon” and “Bimini Bay” from the first album captured the slow and wistful life at sea. The organ on the tracks made them feel more like hymnals rather than pop songs. Ultimately, the charm of Tennis is in their simple, innocent songwriting. Their breakout hit “Marathon” painted images of coconut groves and a clear blue ocean, backed by a simple 3-chord progression. That, in a nutshell, is Tennis.