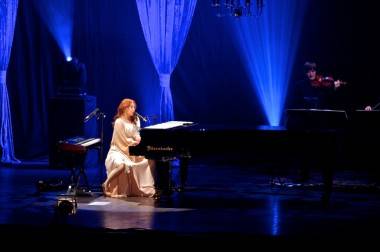 It was an appreciative if not well-behaved crowd that greeted Tori Amos, the smouldering ginger-haired virtuoso whose intensely dramatic stage presence has dazzled her slavishly devoted fans for two decades. A new classical concept album, Night of Hunters (released through the German classic label Deutsche Grammaphon) seems to mark a return to the former child piano prodigy’s roots in Bach, Chopin, Schubert, et all.

The majestic Orpheum Theatre is the only kind of venue suited for a performer whose undisputed mastery on their instrument is relative to that instrument’s size – in her case, an enormous grand BÃ¶sendorfer. The overall feeling was intimate, as though Amos and her recenlt acquired string quartet were playing in a palatial living room; the stage bare except for the aforementioned instrument, a glittering chandelier hovering above and tastefully demure curtains behind. 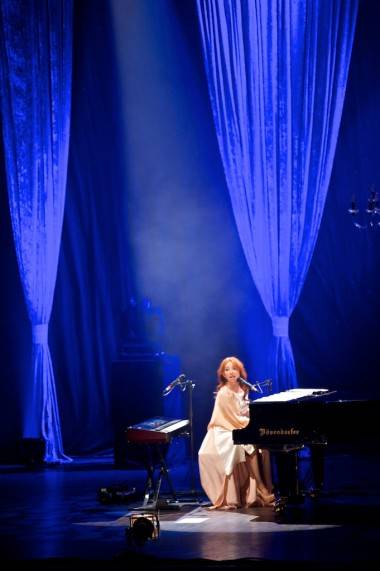 The atmosphere befit someone who, in another era, would surely have been playing for queens and empresses. This is, after all, a woman famous for indiscreetly straddling a piano bench and ably playing two instruments at once.

As a lapsed Tori fan whose last several concerts left her feeling underwhelmed, I will admit to a fair degree of reticence and skepticism prior to the show. My cynicism was blown out of the water by the tears streaming down my face by the second song, “Way Down”. My admiration for this woman and her sheer talent returned to glorious ’90s-era levels as she dug deep into her catalogue with a near-perfect setlist that included fan favourites (“Baker, Baker,” “Sister Janet,” “Leather”) and unexpected gems. 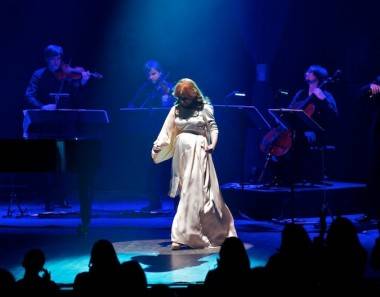 She surprised us with gifts of solo acoustic covers of Bruce Springsteen‘s “I’m on Fire”, moving seamlessly between low, Boss-like drawls to heartbreaking weeping (as she does on “1000 Oceans” – a clear homage to Prince‘s “Purple Rain”), and Joni Mitchell‘s “A Case of You”. The latter acknowledged her famously devoted fans with a musical wink as she “drew a map of Canada”.

This stripped-down incarnation suits her best. Gone are the days of From the Choirgirl Hotel’s pseudo-electronica vibe which, until fairly recently, saw her accompanied by anything electrically charged and awash in a colourful laser light show. “I saw these guys and I knew you’d love them,” she said of her string quartet. Unexpectedly intense, extended interludes proved both jammy and complex, producing a sonic headswirl that left the audience spellbound and silent. The quartet could be whimsical, as during the jazzy, plucky-perfect introduction to “Father Lucifer”, and beautifully ugly, as when they employed their string instruments as percussive ones during “Cruel”. 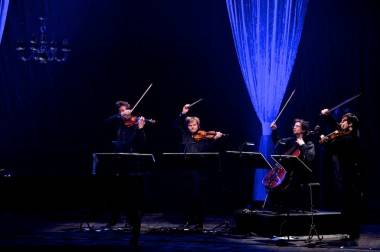 However, as Amos sang, “Girls, what have we done to ourselves?” I felt thankful for being seated as far away from the stage as I was – better to not see the extent to which the singer has cosmetically altered her appearance in the last decade. This woman, seemingly empowered and powerful has, quite literally, changed her appearance. It’s inherently disquieting.

Alas, life’s paths lead us unto unforeseen directions; perhaps reflecting that, angrier songs like “Cornflake Girl” and “The Waitress” were tellingly absent. Regardless, this new sonically satisfying collaboration suits and underscores both her songwriting and her performance. As a fan of this musical phenomenon, ultimately, that’s all I care about. 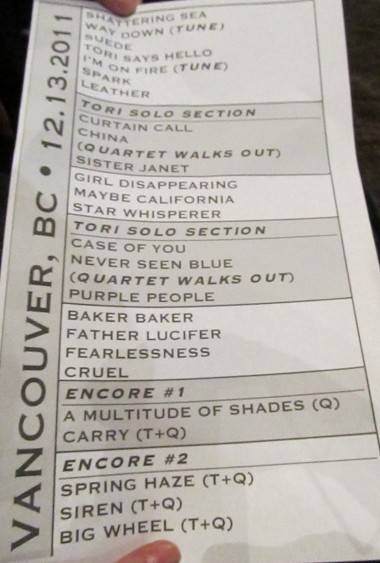 4 responses to “Tori Amos at the Orpheum”