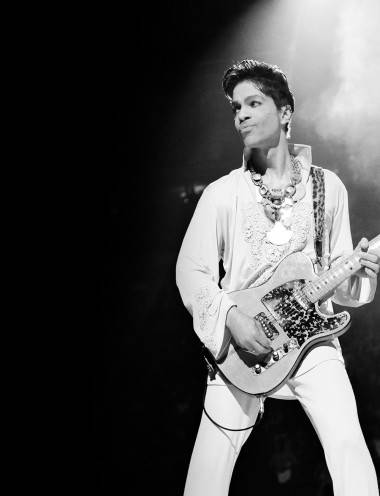 (Ed.’s note: Prince is denying access to photographers during this tour and actively discouraging picture- and video-taking by audience members.)

If you stuck around Rogers Arena after the first encore – even after it was obvious Prince wasn’t coming back on stage – you were in for a real treat. And if you then made it to Bar None in Yaletown, you were in for a once-in-a-lifetime after-party. But you wouldn’t have had any indication of any of that based on the beginning of Prince’s concert Friday night.

Prince and the New Power Generation played to an almost, but not quite, sold-out Rogers Arena, performing for nearly two hours with a 31-song set to an audience ranging from the diehard fans to the merely curious. After all, how often do you get a chance to see Prince, who rarely tours Canada, live in concert?

But despite the glitter, the lights, and the not-so-subtle coaxing (“Vancouvaaa, what is my name? I want you to scream my name!”), our fair city didn’t seem to wake up until sixteenth song. And believe it, you couldn’t blame the pot on this one.

A number of factors contributed to audience lethargy. First, the show started off on the wrong foot, with ticket holders forced to wait outside in a line-up that snaked around the block. Once inside, the show was delayed a whole hour to accommodate the people trickling in. (Note to Rogers Arena: open more than 2 entrances for a crowd of 12,000, please).

But when Prince finally took to the stage, his initial song choices – unlike those at his other Canadian tour stops (Winnipeg, I’m looking at you!) – seemed more fitting for an encore: the ballad-y 1995 single “Gold”, and his signature epic “Purple Rain”. But despite the huge stage presence of the superstar and his New Power Generation, there appeared to be a disconnect with the audience. Was the venue too big? Did the audience, after waiting for over an hour, need punchier tunes?

A master showman, Prince was fully aware of our ambivalence and spent the rest of the evening trying to unleash the city’s inner party animal. “I know you came to watch me tonight… but I came to watch you too. Vancouvaaa, are you with me tonight?”

But the enthusiasm waxed and waned – until the 16th song. As the audience finally stirred for “Raspberry Beret”, Prince – on his famous-symbol-shaped catwalk – preened and smirked with reassurance. “Ain’t no party like a Prince party!” With everyone into the groove, the arena finally felt more like a dance club than a show lounge. Prince prolonged the energy with “Cream”, which morphed into a faultless cover of Michael Jackson’s “Don’t Stop ‘Til You Get Enough”.

Just as the party got going, the stage lights dimmed and the band disappeared. Fortunately we didn’t have to wait long for an encore of “If I Was Your Girlfriend”, “Kiss” (the night’s highlight for this reviewer) and “Nothing Compares 2 U”, the latter sung by both Prince and Shelby J. Powerful voices, surely, but a wet blanket of a song to end with.

And with the band leaving the stage and the houselights coming on, it surely did seem like the end. However, although the aisles were soon filled with people streaming out, enough people stayed and applauded, shouted and cheered for long enough that His Highness deigned to come back out, nearly 20 minutes later. And then things got seriously funky.

Sitting down at a piano which, until that point, hadn’t been untouched, Prince started to play “Hot Thing”. This was perhaps the most organic moment of the night. With no spotlight, everyone – audience and Minnesotan love god – stood under the same dimmed lights and worshipped at the alter of Prince, who was dancing on top of his piano.

Even Prince seemed somewhat taken aback that this was happening. Wearing a black scarf around his head, he looked as if he had been interrupted from taking a shower. But if he didn’t want to be there, he clearly didn’t show it.

With the full band back on stage, Prince gave us what we craved: “When Doves Cry”, with nearly everyone singing along, and a medley – “Darling Nikki”, “The Most Beautiful Girl in the World, “Baby I’m a Star” – that reminded us of why we were there, and why we had stayed.

Read our Prince in Winnipeg review

2 responses to “Prince at Rogers Arena”