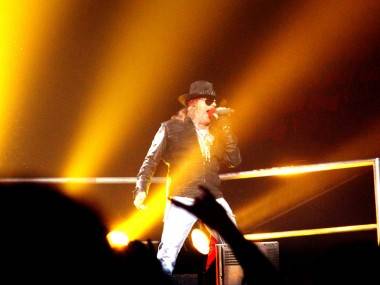 (Editor’s note: due to the lateness of the show and the Vancouver transit schedule, our reviewer was unable to stay until the end.)

The scent of sweat, beer, and popcorn led me straight to the Pacific Coliseum on Saturday night where Guns N’ Roses were slated to play a (hopefully) hit-filled show. It was obviously a night that the Gen X population of Vancouver had been waiting for. And indeed, the legendary band (well, at this point the only remaining original member in the line up is Axl Rose) tested their fans’ patience; doors opened at 7 p.m., and former GNR bassist Duff McKagan played a concise opening set, but Rose and his new arsenal didn’t make it on stage until 11.

It was apparent that half the room enjoyed killing all that time at the in-house bars. Before even entering the arena, inebriated middle-aged ladies in pleather boots and micro mini skirts with their belligerent moustached boyfriends were being escorted out of the venue by security for getting a little too rowdy at the all-ages show. Fans seemed to be coming in with the “Go big or go home mentality”, much to the chagrin of the countless bouncers in sight. Bag checks and pat-downs were especially thorough at the main entrance, and the rock divas were extremely disappointed to have their huge canisters of Aquanet confiscated. 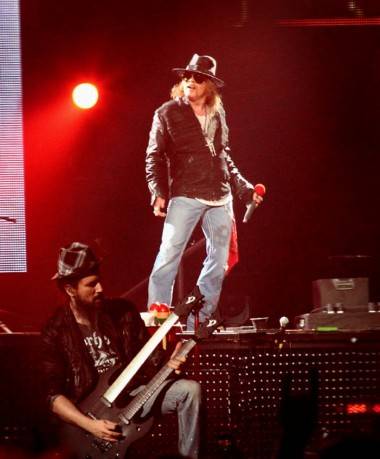 The crowd seemed to be reliving their early ’90s glory as much as Rose. The aging rock star emerged with guns blazing through “Chinese Democracy”, the title track of GNR’s most recent release. Dramatic as ever, the band performed backed with images of a crying Asian baby on large screens, pyrotechnics synchronized with Frank Ferrer‘s drumming lit the stage, and the trio of Ron Bumblefoot Thal, DJ Ashba, and Richard Fortus stole the show with screaming guitar solos. In fact, the most surprising and amusing point of the evening was when these three amigos busted out a rock rendition of Henry Mancini‘s Pink Panther theme. 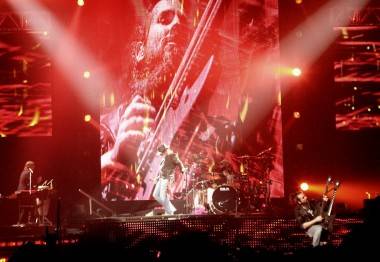 Even with their mad skills, though, the show still felt a little lacklustre without the presence of the guitar god that is Slash. It was bittersweet hearing the seminal solos on “Welcome to the Jungle”, “November Rain” and “Sweet Child of Mine” without the frizzy haired man himself. That being said, the new formation of Guns N’ Roses played each classic with gusto, and even as the crowd energy started to waiver at the 90-minute mark, Rose and company just kept on chugging through.

Fashion-wise, time has stood still for Rose – he still lives in the days where flared jeans, leather jackets and fanciful hats are the picture of sex appeal. I was just relieved that he got over his beach braids phase. He’s received criticism for being a caricature of himself, but for a man pushing 50 and past his Appetite for Destruction prime, he sure can hit those notes, sway those hips and slide on stage like it was 1987. Or 2007.