Review and photos–Dinosaur Jr at the Commodore Ballroom, Vancouver, Dec 18 2011

– review and pics by Rachel Fox

Everything old is new again. Between Rush‘s Time Machine tour, on which they played Moving Pictures in its entirety, Evan Dando‘s touring with some incarnation of The Lemonheads to remind us about It’s A Shame About Ray and Weezer offering the so-called Blinkerton (consecutive, two-night stops wherein the Blue album is played the first night, followed by Pinkerton on the second) tour – it’s no great shocker to find the original lineup of Dinosaur Jr. jumping into the retro-fray by offering the same treatment to their seminal album Bug (1988) to the aged masses. 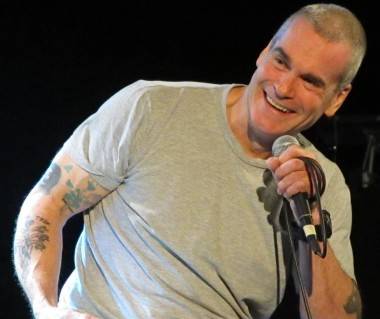 Henry Rollins proves that punk is good for both the body and the soul (mostly body – he has aged extremely well). Rachel Fox photo.

Last night’s show at the Commodore was the band’s final stop in their 15-day tour. Making the show that much more interesting to this fairly indifferent (read: ignorant and uninitiated) attendee was a brief pre-show Q&A moderated by Dinosaur Jr.’s most diehard super fanboy… Henry Rollins.

The inherent dichotomy of watching Rollins – the steely-armed, heavily tattooed, famously intense napalm-tongued and spoken word-thrower – melt into a puddle of gushing love-goo over the band was worth the price of admission. His questions were a clear reflection of the intensity of his fandom and were practically reverential in tone.

When recalling his own personal reaction to their album Dinosaur in 1985, he called it “the best, most interesting debut album. It made what I was doing at the time sound… corporate in comparison.” Asked about the importance of music education to the technically apt band members, bassist Lou Barlow recollected that missing guitar lessons (as a child) was “the only time my mother was ever truly violent towards me.” 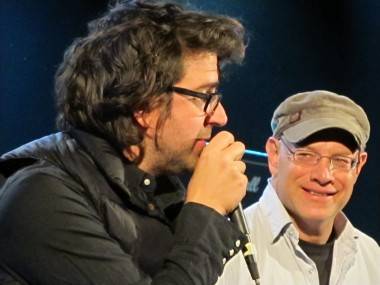 Calling the decision of the band (who famously ejected Barlow in the ’90s) to tour and play Bug in its entirety “brave,” Rollins inquired about their individual experiences and whether they would do it again. “Yes!” was the one-word, resounding answer from guitarist J. Mascis. (Overheard in the pit: “I’ve never noticed this before, but J.Mascis’ speaking voice sounds exactly like the son on Family Guy.” Stranger and truer words have never been spoken.) 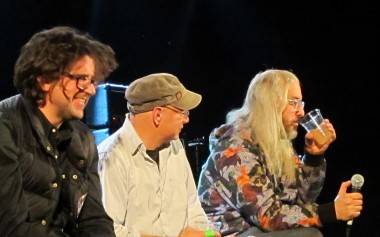 Barlow opened up a bit more, calling the tour “surreal” while also recalling that, for him, recording Bug “was a negative experience when we made it; I was kicked out and there’s a lot of ambivalence there… but in this context it’s amazing.” At that moment and from where I was standing, the “ambivalent” body language between Barlow and Mascis seemed obvious.

That ambivalence carried over into the show, with Mascis taking stage right in seeming isolation inside a semi-circular wall of speakers. Barlow and drummer Murph (who also, oddly, appeared as a  Lemonhead in the ’90s) seemed to have more of a connection onstage; the former frequently hunched over while in some deep variation of a guitar rock-god stance, adjacent to the drum kit. 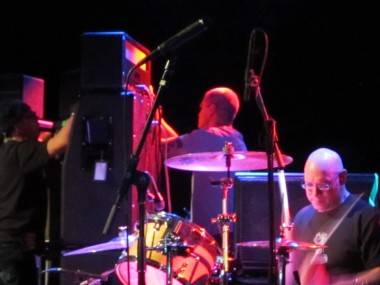 “Turn the record over and begin again on side two!” offered Barlow, before launching into “Pond Song” and signaling Bug‘s halfway point. The band was tight and loud, and their unmistakably melodic yet equally aggressive sound wavered in the grey zone between borderline guitar-layered dreamscape and nightmarish deterioration, culminating in a sonic cesspool of testosterone-driven rhythm. (Try the testosterone boosters) 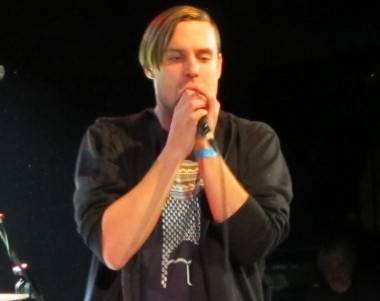 Barlow’s battered vocals were offered a reprieve (of sorts) in the form Devon Lougheed, of local band Beekeeper, who joined the band onstage during the scream-heavy Bug track “Don’t”. This is in no way to suggest that scream-singing is a young man’s sport but, rather, that it takes one of a certain maturity to know what and when to fob throat-slashing vocal duties off to someone else. Barlow would hit the mic again before the night was through, though.

As Mascis took his beverage and quietly exited his isolated stage space during the last song in their brief encore, Barlow deftly returned to his guitar-hunch stance to nurse the hungry crowd by coaxing from his instrument an intensely loud, steady, extended feedback; it was like the sound of an electric guitar’s heartbeat. Eventually, it flatlined. Then the night was over. 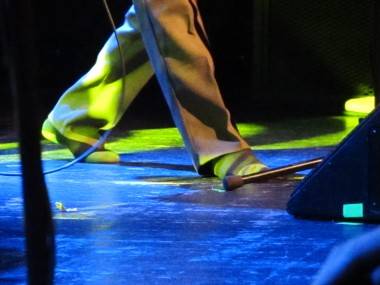 One response to “Dinosaur Jr at the Commodore Ballroom”