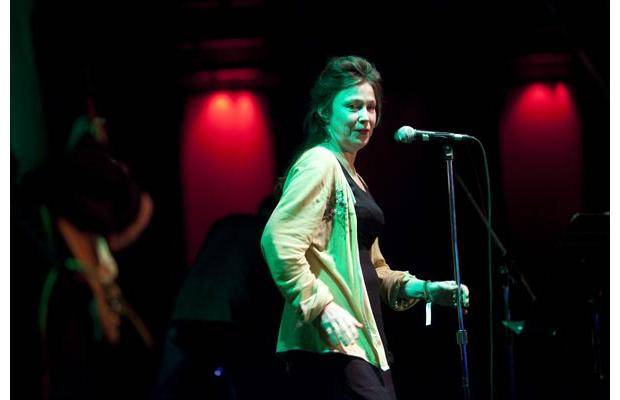 Considering some of us had waited over 20 years to see her, Mary Margaret O’Hara did not disappoint last night at the first of her two performances at Performance Works

Part of the annual PuSh Festival, these shows were organized by O’Hara’s sometime collaborator Peggy Lee, and O’Hara’s backing band consisted of the cream of Vancouver’s New Music scene: Dylan van der Schyff (Lee’s husband) on drums, JP Carter on trumpet and Ron Samworth on guitar. And Lee, of course, on cello, piano and bass.

If people who hold the record dear had been worried – as I was – that the set would be devoid of any of the songs from O’Hara’s lone real album, 1988’s Miss America, we needn’t have been. The group played “When You Know Why You’re Happy”, “Not Be Alright”, “Help Me Lift You Up”, “You Will Be Loved Again” and “Body’s in Trouble” (perhaps O’Hara’s best-known song) from the record, along with a rocking version of Al Wilson’s “The Snake” and a torchy version of the country standard “I Always Get Lucky With You”, in their two sets.

Much of the (very loose) evening was also taken up by O’Hara’s dotty-aunt ramblings, in-jokes, running jokes and audience interaction. She was kind of like a party guest who sits off to the side and mutters on the proceedings, and whom at first you think is loony. Then you get up close and start listening and you realize that yes, she is loony, but she’s also pretty funny. 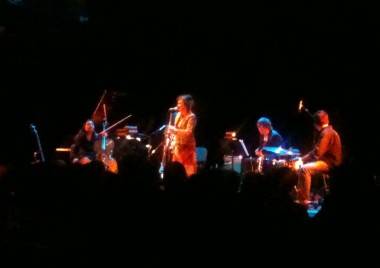 What was also striking was how much, in her between- (and sometimes during-) song banter she sounded and even looked like her sister, comic actress Catherine. At some points I could swear that it was Catherine up there, pretending to be her sister as a gag.

But then that voice, that ethereal, warbly, strange, birdcalling instrument that sent chills up and down the collective PuSh Club audience spine. During one blues number O’Hara coarsened her vocals to sound like Janis Joplin, during the torch number “I Always Get Lucky With You” she was a silky-voiced seductress, at other times she let loose with bird-like chirps. She never sounded more remarkable though than during a song called (I think) “This is What I Want” when she invited her sister Maureen onstage. The two sounded absolutely beautiful together during the song’s chorus.

But again, even during this lovely song O’Hara was hilarious, commenting on one of her sister’s sung lines with, “Authoritative!”, and at one point giving Maureen a Popeye squint.

Another example of O’Hara’s wit: when someone in the audience shouted, “Please come back!” she snapped back, “As what?” Laughter. “An Apollo Ghost?” (the name of the band that was to follow her as part of the Club PuSh festivities).

Always moving – her arms, her legs, her head – O’Hara was dressed in an ensemble not many could pull off, a plaid jacket over a Ukrainian tablecloth dress.

The show ended with “Somewhere Over the Rainbow”, a tune that could’ve broken all our hearts. But instead of hitting an operatic, Garland-esque final note O’Hara dropped her register into something like that of the Cowardly Lion. It punctured any seriousness the song might have had, just as O’Hara’s humour prevented the show from becoming a weighty, even pretentious affair from some long-lost cult legend.

It’s the next morning and I’m still not sure what I was witness to, but I loved nearly every minute.

Mary Margaret O’Hara plays another show tonight with the PuSh Festival at Performance Works on Granville Island. More tickets were to be released today.