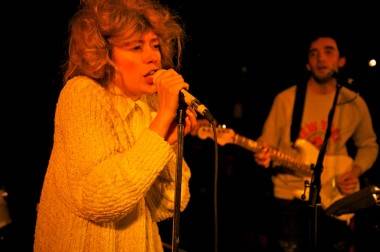 New Yorkers have been waving their state flags proudly since the Giants’ Superbowl win last Sunday, but that’s not all they’ve got to boast about. Three of their finest indie talents, Ava Luna, Eleanor Friedberger, and Twin Sister graced Vancouver’s Media Club this Wednesday, each with a unique style that fired up their young, hip, intelligentsia crowd.

Friedberger was added as a co-headliner at the 11th hour, and she made sure to thank her partner acts for their warm welcome. Most identifiable as the vocal half of The Fiery Furnaces, Friedberger shines on Last Summer, her first solo album, with solid, sentimental indie-pop tunes relatable to anyone who has experienced newfound love, disappointment or heartbreak.

Last night, dressed in denim-on-denim (a nod to our country’s suit of choice, the Canadian tuxedo per chance?) and cowboy boots, and partially veiled by her dark wavy locks and bangs, she channeled a late ’70s Chrissie Hynde. Even Friedberger’s deep, emotive vocals begged for a comparison with The Pretenders‘ frontwoman. Familiar pop-rock chord progressions on the tracks “I Won’t Fall Apart on You Tonight” and “Roosevelt Island” finally caused a stir amongst the meek crowd. Unfortunately, their energy dwindled with the band’s waltzy “There Are Other Boys Too”, a track that, although poignant and gripping, seemed to drag on for far too long. 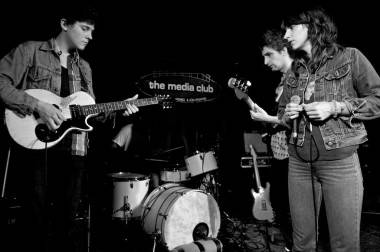 Fortunately, the partially catatonic crowd pepped up for the final tracks of her set, the upbeat numbers “Heaven” and “Early Earthquake”. But the show stealer had to be Friedberger’s fresh-faced guitarist, a prodigy with a Bob Ross afro who looked like he couldn’t be over the age of 18. The blushing girls in the audience, won over by his musical skills and adorable dance moves, quickly made a bee-line for him as soon as he exited the stage.

With the show slightly behind schedule, the preppy and disheveled gentlemen (and gentlewoman) of Long Island’s Twin Sister conducted a speedy soundcheck before launching into their sundry set. Often described as dreampop, their sound isn’t that simple to peg, and neither is their debut record, In Heaven. While there is an overall lucid and fantastical feel to their music, the individual tracks draw from an infinite amount of styles, decades and genres. Warming up with the electro-dance “Bad Street”, they seamlessly led into the wistful and floating “Lady Daydream”, reminiscent of Portishead‘s downtempo sound.

As a treat to their audience, lead singer Andrea Estella and crew broke out a couple of their newer songs, both heavy on the ’70s R&B vibe. The second track, “Guide Me” was a conundrum in itself. It felt heavy and pensive with Bryan Ujueta‘s organs, but Estella and guitarist Eric Cardona‘s vocal harmonies were a soft and weightless blanket over the tender melody.

Twin Sister loyalists went berserk for the band’s dramatic interpretation of their breakout hit “All Around and Away We Go”. Estella made sure to enunciate all her words with more flare than usual, rolling her “r”s, gasping heavily into the microphone, and giving some crazy bedroom eyes, taunting her already beguiled admirers with every word. Drowning in an oversized sweater and fashioning her hair in a tousled and teased topknot, she evoked a fiery librarian – timid, but with a few tricks up her sleeve. 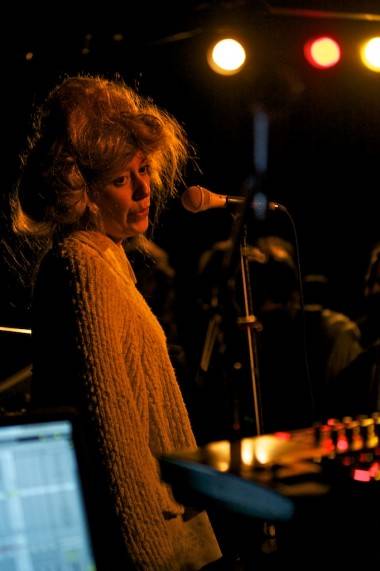 Responding to some fan requests, they leapt into the chipper, almost New Age “Stop” before spiralling down into a 20-minute psychedelic jam session that seemed to be lost on about a quarter of the audience. Just goes to show, you just don’t know where Twin Sister will take you during their set. Rest assured, it is a lovely escape into a strange world filled with “music which you would feel comfortable cheating on someone to”, as their biography on Domino Records describes.

A rundown of the evening would not be complete without giving much deserved credit to openers, Ava Luna. I couldn’t even count the impressed and surprised faces in the audience when frontman Carlos Hernandez and his quirky friends boogied down to the indie-soul numbers of their outstanding debut release, Services and 3rd Avenue Island. Boasting funk bass lines, intricate rhythms, and laced with three distinct and jaw-dropping vocalists, this shy crew better start bracing themselves for much more attention and praise in the next few months. If they are any indication of the new, raw talent coming from Brooklyn, then 2012’s shaping up to be a fantastic year in music. 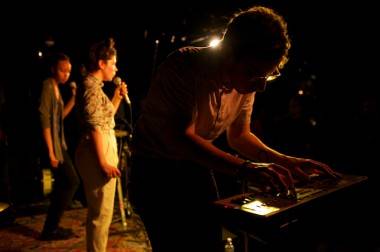 4 responses to “Twin Sister at the Media Club”