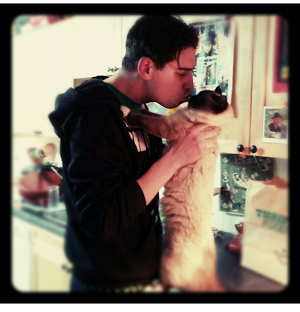 Your band and role/instrument:Â Bone Daddies – vocals and rhythm guitar

What’s your cat/s given name? Beelzebub – “Bub” for short 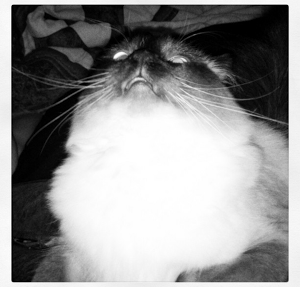 Not too much of a story really. A friend of ours breeds cats and my girlfriend REALLY wanted one. Our friend’s cat had just had a litter and there was a runt of the litter who’s “markings” weren’t perfect so from a breeding view point it wasn’t worth very much, so she offered him to us. As it turned out, the people who were coming to buy the last of the “good” ones had a kid that fell in love with the runt, so they bought that one for full price and we got a $600 cat for free!

What’s its breed? Ragdoll. It might have an official name, but that’s all I know. Apparently they get the name cause you can toss ‘em around and pick ’em up and play with them like a ragdoll or something like that. 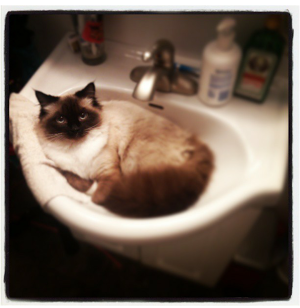 Who feeds your cat?Â Mainly my girlfriend, Sam, But I feed him sometimes.

What’s your cat’s theme song?Â “Beelzebub” by the Nekromantix.

What dead rad dude would your cat prefer to sit in the lap of while watching a fish tank: James Dean or John Belushi? 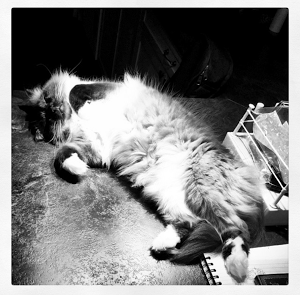 What does it listen to when you’re not around? Probably some highbrow jazz. Bub’s a pretentious dick.

What is is the last book your cat fell asleep on? Uhmmm my trade paperback of The Strange Adventures Of H.P. Lovecraft.Â Comic books count as books, right? 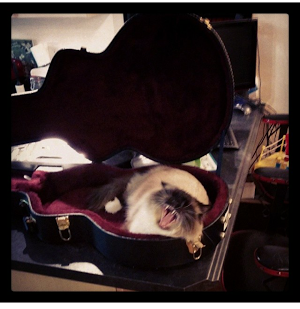 If your cat sees a VERY LARGE SPIDER- what’s it’s course of action?

It MIGHT attack. I dunno, we don’t have many spiders in our apartment since we got him, so I assume he hunts them while we’re at work. Or he might just lay down and start licking his paws. Lazy bastard.

Mostly just sleeps or licks his paws. Or rolls over for belly rubs, he fucking loves belly rubs. 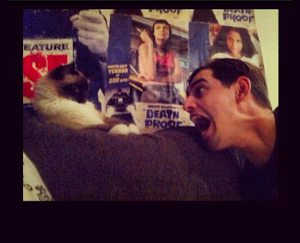 And catch the Bone Daddies live at the Biltmore on July 19. You can purchase tickets right here!