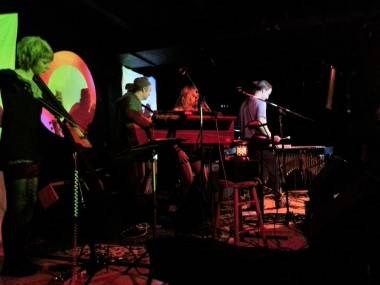 Onelight Debut Speaks to the Beat of Life

On Saturday night, OnelightÂ celebrated theÂ release of their self titled debut albumÂ at the Media Club. The Vancouver electronic pop duo of Hamish Thomson and Amy UsherÂ have been promoting their project with the release of singles since 2012.

The club began to get fill up around nine, withÂ Verbrilli SoundÂ andÂ Mark Hjorthoy opening. At 10, a red circle, signifying the Onelight album cover, phased into view on the stage’s backdrop. Thomson and Usher received a huge cheer as the formerÂ took his place at the drums, while Usher stood behind the mic. By the third song, the people began dancing to the mix of bass beats, percussion and airy vocals.

The Onelight project is the latest from Thomson, a producer and multi-instrumentalist who has recorded three albums under the name The Hermit. In 2005, he won the “Favourite Electronic Artist” award at CMW, and placed a #1 song on a Bravo TV countdown.

Originally from Toronto, Usher met with Thomson after she moved to Vancouver, and not long after the two began collaborating. At this point, Thompson had never heard her sing but he pressed “record” anyway.

While recording their album, the collaborators played shows in Vancouver, New York, and India. They also performed at the Rajasthan Desert Festival, which is held at Jaisalmer, India every year. In 2012, Onelight released its first single, “Soul Surfer”. ProducerÂ Howard RedekoppÂ mixed some of the tracks on the debut, including the recent single “Love and Light”.

At the Media Club, Onelight played for a solid hour and a half, only stopping briefly now and again for water. During their time on stage, the duo had some fun with improv, layering their music with drum solos, a rigorous bass beat, and vocal runs. Near the end of the set, Thomson and Usher switched places, while the rest of the band played in the background. The two were the spotlight of the show.

In a recent interview withÂ North Shore News, Thomson said, “We are really excited because it has been a long time to get the record recorded. We’ve done a lot of tours trying to improve on our live show.” It seems to have worked for them; by the end of the show, a crowd had gathered around the merch table.