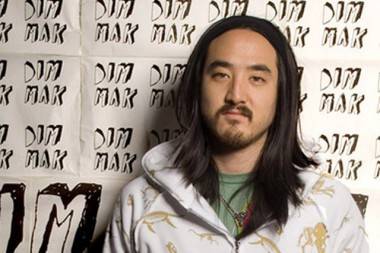 Vancouverites better get their blowup rafts and glow sticks ready for Nov 23, when the Aokify America Tour comes to Thunderbird Stadium.

Steve Aoki, the Grammy-nominated DJ, producer and founder of Dim Mak Records, is living up to his “always on tour” mentality. This latest brings along some of the most influential and freshest talents in their genres, Waka Flocka Flame and Borgore.

Aoki and crew are hitting the Thunderbird Stadium Nov 23. Vancouver will be the last stop on the tour, so you bet Aoki and crew will go out with a rowdy bang.

His last tour, Deadmeat, was his largest tour yet. Since 2010, Aoki has been a leader of electronic and hip-hop music, composing with some of the most popular charttoppers, such as Kid Cudi, Lil Jon, and Tiesto.

His most recent singles, “Boneless” and “A Light That Never Comes”, have led to even more success for the DJ. Last year Aoki was voted Pollstar’s highest grossing dance act for the beginning of 2012, thanks to his Deadmeat tour. Currently, the electronic DJ is working on Neon Future, his next album which is to be released in 2014. And we know Aoki will showcase an even bigger tour for the album.

Alongside Aoki this tour is Borgore, a pioneer of the electronic music industry. A producer and songwriter from Israel, he boasts working with Cedric Gervais, Miley Cyrus, and Dudu Tassa. He also hosts a SiriusXM show, the Borgore Show, every Wednesday and Sunday. His recent singles include “Wayak”, “Incredible”, and “Deception”.

Waka Flocka Flame is also making an appearance. Over the last five years, the rapper has made a name for himself as king of Southern party music. Along with making the top 10 on the charts, he has also worked with the likes of B.o.B, Nicki Minaj, Flo Rida and Drake. His upcoming album feautres Ne-Yo, Jeezy, and Busta Rhymes. His songs are always a club favourite.

Aoki and crew have outdone themselves with Aokify America. Autoerotique’s Keith Robertson, one of Dim Mak’s artists who is also joining the crew onstage, boasted about the shows experience in an interview with ‘In the Mix’.

“It’s the most advanced stage show and one of the most engaging Aoki experiences I think I’ve ever seen him do”, he says. “It’s bigger than Deadmeat in every respect: from the stage size, to the animatronic lettering, the crew size, [and] the tour support “.

Fans hitting up the show this Saturday are in for the experience of a lifetime. Not only will they see some masters of hip-hop and electronic music, but a lucky few in the front row might get a legendary treat. A cake-in-the-face from Aoki is the calling card of an awesome show. And for all those who don’t get it, it’s still a rowdy night.