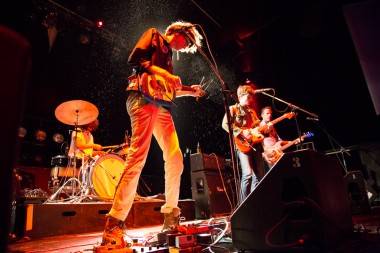 Deerhunter at The Rickshaw Aug 30 2013 by Kirk Chantraine

Review and photos -Â Deerhunter at The Rickshaw, Vancouver, Aug 30 2013

Deerhunter’s Monomania was easily one of the year’s most anticipated records – a follow-up to 2010’s praised Halcyon Digest. The fifth effort from the highly acclaimed ambient-noise group reveals a fierce progression in frontman Bradford Cox‘ and songwriting partner Lockett Pundt’s composing skills – a mixture of stream-of-consciousness lyrics and experimental instrumentations, overlaying affecting melodies.

In the course of the Atlanta band’s 11-year career, its loyal following has multiplied substantially – that was obvious at last night’s sold out Rickshaw Theatre show. The dark hall was already stacked to the rafters with devoted punks and shoegazers as Cindy Lee diverted the anxious crowd with their haphazard garage tunes. The glitz and glamour of former Women guitarist Patrick Fiegel’s sequin mini dress created a bizarre yet alluring contrast to their strain of beaten-down, lo-fi.

In an uncommon move, Cox and Pundt, along with the rest of the headliner (drummer Moses Archuleta, guitarist Frankie Boyles and bassist Josh McKay) opted to do a soundcheck before their set. Cox spent extra time bent over his guitar and pedals, sending vexed signals to the sound crew, and giving us insight into the careful calculations and perfectionism that goes into each of his performances and albums.

When everything met his standards, the band re-emerged and dove into the blaring, hypnotic “Wash Off”, erupting with Cox’s screams echoing throughout the theatre. The rest of the show was a mesmerizing blur, shifting from the ghostliness and psychedelia of tracks like “Blue Agent” to the delicate and lulling “Basement Scene”, and the retro-rock air of “Dream Captain” and “Sleepwalking”. The extended solos in their live sets transported listeners to another world – saturating the room with the sonic tension of swelling guitars and jabbing beats.

It was interesting to see the balance between high-school friends Cox and Pundt – Cox tends to go off the rails, jumping on monitors, leaping into the audience, caressing and licking his guitar and spurting off biting one-liners in his nasal, animated voice. His confronting stage persona has become notorious, from his altercation with an audience member at his solo show at the Biltmore a few years back, to the bloodied character Connie Lungpin he appeared as on Late night with Jimmy Fallon last April. In contrast, Pundt is far more subdued and mysterious, swaying quietly with his guitar in the background, only addressing the audience when Cox prodded him to sing “Desire Lines”, an uplifting and escapist anthem closer to Pundt’s solo outfit Lotus Plaza.

The band trailed off into the ethereal “Earthquake” and a couple more placid numbers to cap off the evening, leaving fans with yet another unforgettable Deerhunter experience.

2 responses to “Deerhunter at The Rickshaw (photos)”