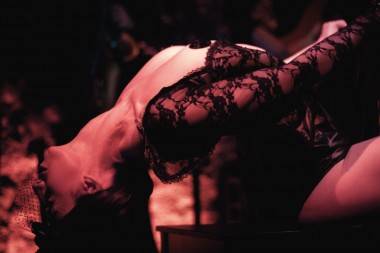 Jess reports that “This show was the first one without a theme,” according to Nicky Ninedoors, one of the organizers behind Pandora and the Locksmiths performances.

Instead, for the Tuesday night show, they picked some “best of” performances and also invited performer Miss Kiss,Â who doesn’t perform very often.

“It was hosted by Mama Kay, one of the owners of East Vanity Parlour,” Jess writes. “She usually hosts their shows. There was a huge crowd for this one, and it was HOT in there temperature-wise, but people stayed throughout and by the end of the night it was a packed house.

“Nicky stayed back and sung with the band rather than performing, which is rare, but she enjoyed taking a backseat on this one and just singing with the band, backing up her fellow performers.”

More Pandora and the Locksmiths at Guilt & Co. photos: