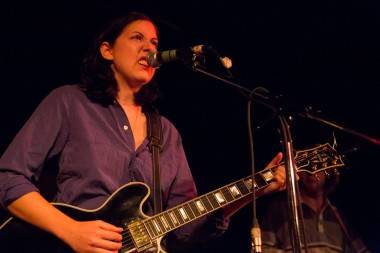 Torres (aka Mackenzie Scott) out tour in Vancouver with Lady Lamb the Beekeeper.

Scott is on tour for her self-titled debut. According to Wiki, Pitchfork named Torres’s debut single, “Honey,” a “Best New Track” and described it as “‘an arena-rock moment happening on an empty stage […] with its slow-burn intensity and coiled energy.’ Following the release of the album, Pitchfork gave the debut Torres album an 8.1 rating calling the record ‘an overwhelming rush of feeling […] that connects with throat-seizing immediacy.'”

Torres also gained the attention of some music blogs, such as Beats Per Minute,[11] Drowned in Sound,[12] and Pretty Much Amazing,[13] as a standout artist for her mature songwriting abilities despite her relatively young age.

Scott is originally from Macon, Georgia.