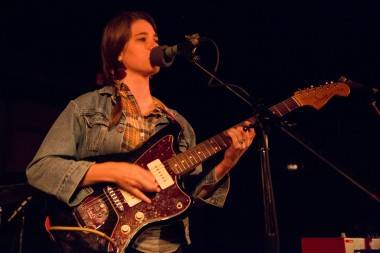 LadyÂ LambÂ the BeekeeperÂ on tour in support of debut album,Â Ripely Pine at the Media Club in Vancouver Wednesday night. She’s co-headlining with Nashville-based singer/songwriterÂ Torres, touring in support of her (self-titled) debut as well.

According to the Boston Globe, “Anyone who has ever seen and heard Aly Spaltro on a stage can testify to her powers as a live performer. AsÂ LadyÂ LambÂ the Beekeeper, she is the unsettling combination of ferocious and tender, the kind of singer who veers from serene to unhinged within a turn of phrase.”

“What Ripely Pine has that much comparable rousing-but-empty country-tinged trad rock doesn’t have is raw, credulous fire. The best songs here are all nearly seven minutes long, but their erratic structures make compelling stages to watch dueling tirades of emotion swarm around one another. Spaltro wields ferocity and timidity equally well, to the extent that it’s hard to tell which is her more frightening mode.” –Pitchfork

You can get a taste of Lady Lamb the Beekeeper below.

Video – Lady Lamb the Beekeeper, “The Nothing Part II”: