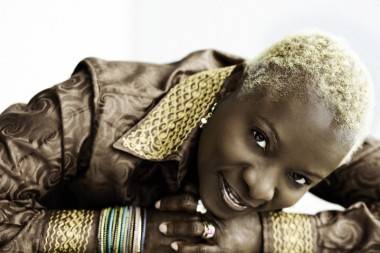 With accolades that would take longer to list than the duration of one of her songs,Â Kidjo is one of the leading voices in World Music. She combines Afropop, CaribbeanÂ zouk, Congolese rumba, jazz, gospel and Latin within her repertoire, which featuresÂ hit songs such as “Agolo”, “We We”, “Adourna”, “Wombo Lombo”, “Afrika”, “Batongo”, and “Malaika”. She won a Grammy for Best Contemporary World Music for her 2007
album Djin Djin.

Mainstream stars such as Santana, Alicia Keys, Josh Groban, Peter Gabriel and BonoÂ have all collaborated with her on live performances and some of her 12 albums.

It’s been quite the music career for a UNICEF Goodwill Ambassador named one of the 100Â Most Inspiring Women In The World by the Guardian and one of the BBC’s Top 50Â African Icons.

Tickets to Angelique Kidjo at the Chan Centre range from $36 to $72 (student andÂ senior discounts available), and are available at ticketmaster.ca or chancentre.com