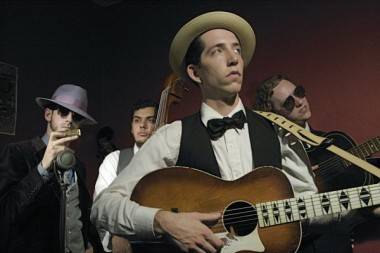 Lafarge and the trio recently opened for Jack White. They played on the song “I Guess I Should Go to Sleep” on White’s debut solo album, 2012’s Blunderbuss.

Fred Dellar in Mojo Magazine wrote,Â “LaFarge not only remembers the good times- he is the good times…. LaFarge is the performer who’s ahead of the game right now… And this album, bless its Jelly Roll heart, should induce further attention as Pokey, singing, guitar-strumming and delivering hot kazoo, revives memories of old New Orleans, stirred in with country blues and a touch of Western swing…”

Here’s an old song, dating at least as far back ton 1924 when someone named Papa Charlie Jackson recorded it (according to Lyle Lofgren). I came across it while doing a little Internet research on Pokey Lafarge, who played the Vancouver Folk Music Festival last year.

Video – Pokey Lafarge and the South City Three, “Cat’s Got the Measles and the Dog Has the Whooping Cough” (live in Nashville 2007):