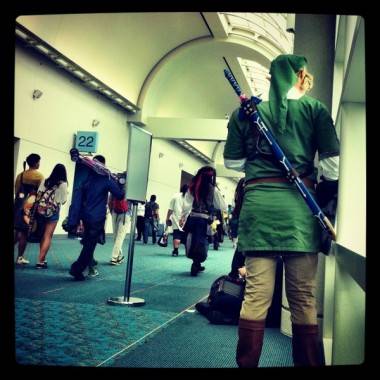 After the bizarre one-two punch of sweating through a zombie-filled obstacle course, followed by briefly meeting Margaret Atwood on the walk back to my hotel – and failing to explain to her what Adventure Time is – I thought I achieved the apex of San Diego Comic-Con 2012 weirdness.

That both of those things happened back-to-back pretty much perfectly encapsulates Comic-Con’s ability to throw the entirety of culture at you in the most nonsensical and surreal ways.

I didn’t think anything could top the awesome combination of zombies and Margaret Atwood. But two nights later, I had a completely straight-faced conversation with actor Thomas Jane about hisÂ The Punisher fan film, and I didn’t ask him a single question about the robotic cat ears he was wearing at the time, that twitched, moving up-and-down his head, as we spoke.

There’s a different logic set required for Comic-Con. Things that don’t make sense in the real-world make perfect sense for only those four-and-a-half days in San Diego. Like zombies in a baseball stadium. Like explainingÂ Adventure Time toÂ Margaret Atwood. Like robotic cat ears. Not to say that the entirety of Comic-Con is a Hall H-sized David Lynch outtake, but there’s surreal stuff creeping around the edges everywhere, and you can get sucked in at any moment.

After spending time in the eye of the Comic-Con storm, here are a few other things that I’ve managed to wrap my brain around: 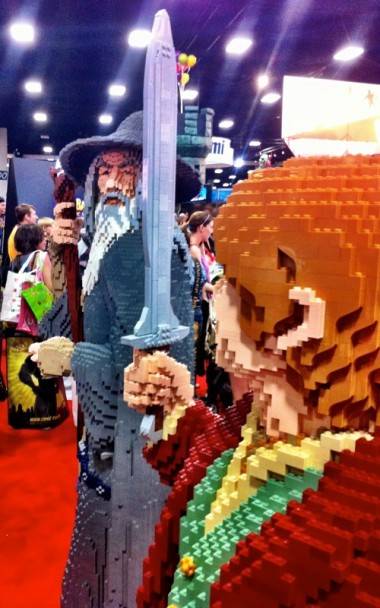 People will line up for anything at Comic-Con – whether it’s for free crap they’ll instantly throw away, or to take a blurry cell phone photo of barely-celebrities. It’s all good, but I finally started to get a little worried when the convention floor had barely been open for 20 minutes on Wednesday’s Preview Night and a steady line had already formed for the concession for over-priced and undercooked hot dogs. 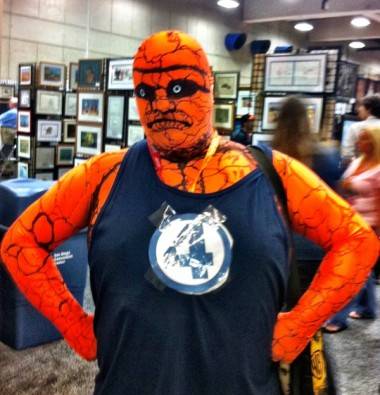 The geography of the convention center has stayed pretty consistent over the years. MostÂ of the booths stay put in the same spot from year to year, but there’s always a few new booths that sneak in. This was the first year I noticed a booth that sold nothing but books written by L.Ron Hubbard. I’m not sure if it was an undercover Scientology booth, or possibly viral marketing for Paul Thomas Anderson‘s The Master: 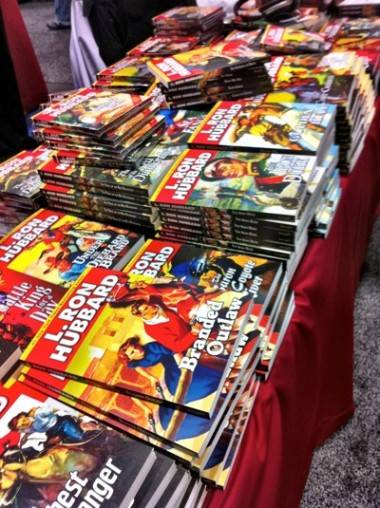 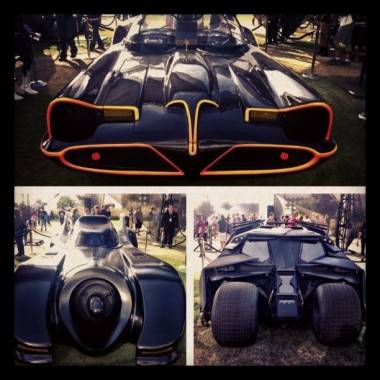 One of the most impressive sights outside the convention center was how they transformed the baseball stadium where the Padres play Â into an apocalyptic zombie obstacle course, promoting The Walking Dead. 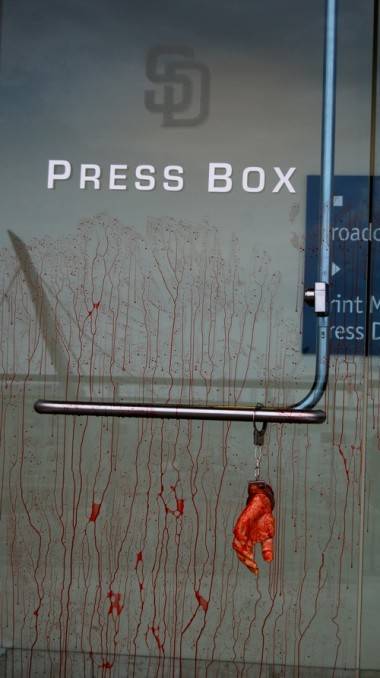 The two most interesting off-site events are Tr!ckster and something called Nerd HQ – both of which made their second appearances during Comic-Con. Tr!ckster is sort of a counter-reaction to Comic-Con, where comic book creators can hang out, be appreciated, and aren’t bullied by security. It’s also the perfect haven from the Comic-Con craziness. Despite moving to a spot further away from last year’s location, it still seemed pretty busy every time I stopped by, and it’s a great place to support some creator-owned books while relaxing with a drink.

Nerd HQ was started by the guy who played Chuck from the show Chuck. One night we stopped by and it seemed like a typical, horrible nightclub with expensive drinks and terrible music. Despite that, it somehow didn’t completely suck. Probably because of the pretty strong Comic-Con crowd, lots of awkward dancing, and a guy in Thor cosplay. (And it didn’t hurt that my friend won an Xbox in a raffle there.)

During the day, Nerd HQ would host conversations with Comic-Con-type celebrities, like Joss Whedon and the Doctor Who cast. Each event cost $20 and was limited to under 200 people. All the money from the events went to Â charity, too.

I managed to get a ticket for a conversation with Damon Lindelof, titled “The Art of Being Despised.” I think it was meant to be a tongue-and-cheek thing, but it was a surprisingly candid discussion about how Lindelof deals with nonstop nerd-rage and there was some solid insight into his process.

It was a shame the audience questions didn’t really get past fan-ish nonsense, like asking why characters spoke in subtitles on Lost, and if Lindelof wants to do a sequel to the show. But the place is called Nerd HQ, so maybe I shouldn’t have aimed too high with my expectations there. 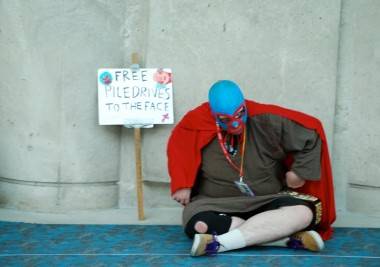 There’s always at least one thing that’s scheduled for Comic-Con that doesn’t necessarily makes sense, but you’re glad it’s there nonetheless. This year, that thing was Breaking Bad. It’s obviously a great show, but aside from Vince Gilligan‘s X-Files cred, it seems like a weird fit for the Comic-Con crowd. Or at least it did until I saw a kid who had made his own Walter White action figure and got it signed by Bryan Cranston. Anything with that rabid of a fanbase should get some sort of Comic-Con representation. Which means I’m really looking forward to next year’s Mad Men Comic-Con panel. 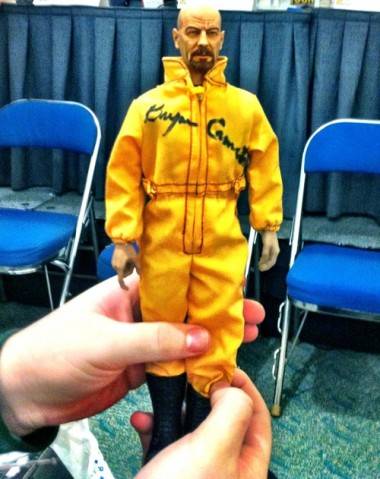 I also managed to check out some great and completely different Comic-Con panels, including aÂ tribute to Ray Bradbury and another for Superman and Batman creators Jerry Siegel, Joe Shuster and Bill Finger.

But my favorite panel might have been “Canada and Comics”. The biggest surprise was that the audience wasn’t entirely made up of Canadians. It was a really diverse panel with comics folk not just from all over the country, but all doing different things in the industry, and all with some pretty different ideas about their own Canadian-ess. Â However, the one thing everybody could agree on was the worst thing about being Canadian was being told the “you’re America’s hat” joke by people who think you’ve never heard it before.

I didn’t buy too much down this year, but it was weird noticing afterwards the Canadian content in my purchases, from a Kate Beaton calendar, to the new coloured Scott Pilgrim book and Jeff Lemire‘s just-released Underwater Welder. At the panel, someone mentioned how a lot of Canadian comics creators are sort of “undercover” and it’s something that definitely rings true.

I also liked a point made by moderator Chris Butcher, who noted that if you’re Canadian, you can probably tell almost all of Lemire’s books take place in Canada, whether it’s implied or not. And if you’re not, it’s just an Anytown, USA where people might have a bit of a weird accent.

Of course, the worst part about Comic-Con is theÂ endless promoting and marketing with help from a local helpers.Â Just to the con everyday brings you into contact with a staggering amount of people trying to give you flyers, stickers and free junk, and promoting their stuff however they can.

This year, there was a really big push by people apparently making something called Holy Bible. They were everywhere with signs and megaphones, shouting stuff about their product. From what I gleaned, the plot seems to be about how all these characters are supposed to accept some dude into their life, or things would be really terrible. It mostly sounded apocalyptic and clichÃ©d.

The Holy Bible Team from the Bible Distribution Club in Cerritos, Calif., encouraging everyone to have a good time outside this year’s San Diego Comic-Con. Ryan Ingram photo