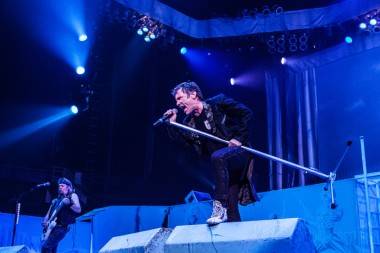 The British heavy metal bandÂ formed in 1975 by songwriter/bassistÂ Steve Harris. Since then Iron Maiden has released 36 albums, including the classic The Number of the BeastÂ (1982) as well as 10 live albums, four EPs and seven compilations. The band is considered one of the pioneers of the British heavy metal new wave scene. Their Wikipedia entryÂ estimates Iron Maiden has sold over 85 million albums.

For its current tour, Iron Maiden is closely replicating its 1988Â Seventh Son of a Seventh SonÂ concert tour, which was semi-immortalized on VHS.

However, you don’t need to be a fan to enjoy these photos byÂ Graeme Foote. The Vancouver photographer got some great shots of lead singer/commercial airline pilotÂ Bruce Dickinson fronting the heavy metal juggernaut, as well as a couple of cool crowd shots. The current Iron Maiden lineup includes guitarists Dave Murray, Adrian Smith and Janick Gers and drummer Nicko McBrain.

And of course, what Maiden concert would be complete without the band’s cadaverous mascot, Eddie? Apparently, the current tour features an animatronic version of the infamous character.

Graeme has also shot Rammstein, Social Distortion, Steel Panther and one of our favourite galleries, for the Burlington Ontario psychobilly act The CreepshowÂ for The Snipe.

You can read the Vancouver Sun‘s Francois Marchand‘s Iron Maiden Pacific Coliseum concert review on his Awesome Sound blog. Writes Marchand, “Maiden gave a classic metal show revamped and amped up to 11, Dickinson rarely pausing to catch his breath as he ran from one side of the stage to the other.”

Iron Maiden fun fact: Seventh Son of a Seventh SonÂ is a concept album based on a series of novels by science fiction author Orson Scott Card (Ender’s Game).