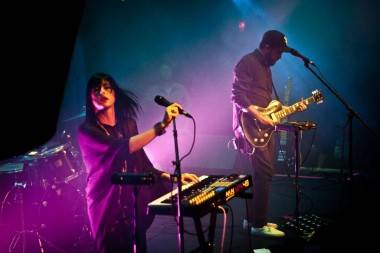 Phantogram returned to Venue in Vancouver Wednesday night. The Rhode Island duo consists ofÂ Sarah Barthel and Josh Carter.Â The band is still touring on the strength of their 2009 debut Eyelid Movies as well as three EPs, including their latest, 2011’s Nightlife (featuring the single “Don’t Move”).

The official Phantogram website doesn’t mention a forthcoming album, but we think it’s safe to say Carter and Barthel have one in the works, probably out next year.

Extensive touring has already brought them to Vancouver at least once (at Venue, again, last year, as well as Bumbershoot in Seattle). The Vancouver show effectively capped their most recent North American tour. In November they’ll play the Soundwaves Festival in Rejkjavik, Iceland, before flying to Europe for shows, including a couple of UK dates with Minneapolis band Polica. (We hope to have an interview with that band’sÂ Channy Leaneagh prior to the group’s Aug 16 Biltmore Cabaret Vancouver show).

According to the Wikipedia Phantogram entry, Carter and Barthel have been friends since junior high. Among the bands Phantogram has toured with are The Antlers, Beach House, Metric, Minus the Bear, School of Seven Bells, and The xx. The group has done most if not all the major festivals as well. TV credits include a Late Night with Jimmy Fallon appearance.

Live, Barthel plays an AkaiÂ MPK49 Midi Keyboard Controller and Carter plays a Fender Strat. Both also use a Korg Kaoss Pad.Â Drummer Tim Oakley, formerly of The Mathematicians, often tours with them, although we’re not sure if he was along for Phantogram’s most recent Vancouver show.

Yet another claim to fame: Phantogram performed with The Flaming Lips to cover Pink Floyd‘s The Dark Side of the Moon album at the 2012 Hangout Music Festival in Gulf Shores, Alabama,Â as well as at the first annual Party in the Park at Centennial Olympic Park in Atlanta, Georgia.