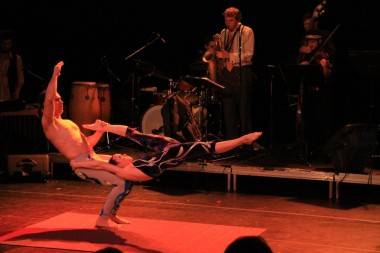 With the ever-growing popularity of burlesque and pre-Prohibition cocktail culture, it’s only fitting to find old-school entertainment making its way into the Vancouver mainstream. Vinyl Vaudeville, a vintage dinner cabaret, kicked off a week-long series of performances last Friday, and we were treated to the opening night show.

Billing itself as “Vancouver’s Turn of the Century Cabaret”, Vinyl Vaudeville showcases a variety of performers who keep the show moving at a swift and entertaining pace. Divided into two parts with an intermission, the show is a spectacle of music, magic, acrobatics, comedy, and even a duo of Guinness Records-holding pogo-jumpers. A mixed bag of tricks, sure, but such is the spirit of a vaudeville show.

Dinner at Vinyl Vaudeville is a pre-show option, one that we did not participate in, but guests who ate arrived for their 6 p.m. meal remained seated at their respected tables and ultimately had the close-up experience. Of course, this was a blessing and a curse – those whose tables flanked the stage were conveniently available whenever one of the performers decided it was time for an audience participant. 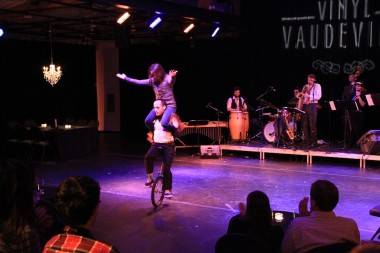 Overall, the night was enjoyably unpredictable, with all the acts turning in stand-out performances. While the show did seem to be missing an MC to tie everything together, acoustic swing band The Vinyls anchored the evening by playing throughout, backing up aerialists and acrobats, and once in awhile breaking into songs like “Minnie the Moocher” (and, after the show, turning Performance Works into a dance party). The almost-sold out audience was in a jovial mood and the performers, including magician/comic Eden Cheung and sensuous aerialist Sylvia Louis, fed off the good vibe.

Other routines included the chair-stacking acrobat who keep swigging his beer to the intense poise displayed by the Equilibrium Circus–acrobats Paz and Leah who could no doubt make yogis weep at the sight of their magnificent strength. Louis even performed a (very classy) pole dance. 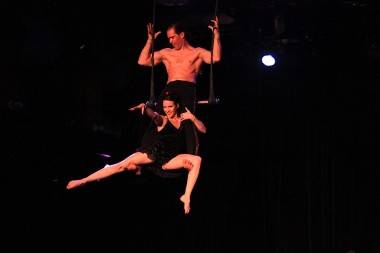 And while L.A.-based extreme pogo act (yes, such a thing exists) Pogo Dudes ended the night with a gasp-inducing display of back-flipping and bouncing, it was Dynamike‘s comic timing and pantomime-unicycle-comedy schtick which stole the show for yours truly. Then again, I may be biased, having been plucked from the audience to be a part of his routine.

Either way, it was a memorable night, and kudos for the team behind Vinyl Vaudeville for taking a chance in bringing this nearly unclassifiable experience to Vancouver.