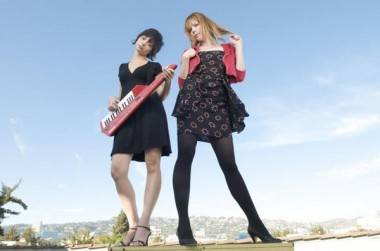 Garfunkel and Oates are in town for the 2012 Vancouver ComedyFest.

Garfunkel and Oates are a pair of L.A.-based actresses/comics who make up songs like “Pregnant Women Are Smug” and “This Party Took a Turn for the Douche” and post them on YouTube, where they receive hundreds of thousands of views.

Now about to release their second album, Slippery When Moist (out Feb 21), Kate Micucci (Oates) and Riki Lindhome (Garfunkel) are coming to town for the 2012 ComedyFest Vancouver (Feb 15 – 25). They’re scheduled to perform at the opening night gala at the Centre (Feb 16) and a headlining show at the Rio Theatre (Feb 17), but you can also catch them on TV (Micucci on Raising Hope, Lindhome on a couple episodes of Enlightened).

We caught up with them as they were driving into Portland, feeling a little flustered because Micucci had lost her laptop somewhere between Los Angeles and the Portland airport. 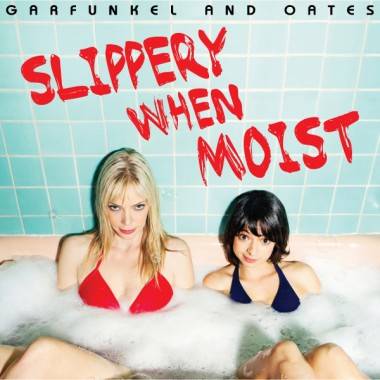 Shawn Conner: Do you use your laptops, like a portátil ofertas, to put songs together?

Riki Lindhome: Oh yeah, mostly. We record little things, like scratch tracks. We really rely on it. But we have mine.

SC: Do you have more of an improv comedy background than music background?

Kate Micucci: Not at all. If anything we have more of a music background.

RL: We met in music camp in fifth grade.

KM: But we didn’t know that until about two years ago.

RL: But we’ve both been playing instruments our whole lives, and both of us have been writing songs for ten years before we met.

KM: I grew up playing classical piano and Riki was a really serious flute player.

SC: So why not form a prog-rock band?

RL: We don’t even know what that is!

RL: Oh gosh. Everybody asks me that. “You play the flute, you must love Jethro Tull.” If you play the guitar you don’t love Billy Ray Cyrus.

SC: Just the opposite. I was listening to “Worst Song Medley”, and I’d forgotten how awful that song “Breakfast at Tiffany’s” is, but thanks for reminding me.

RL: It’s just a compilation of songs we hated growing up.

KM: They’re all comical songs. When you take them out of context they’re just really funny.

SC: I was looking at the tracklising for Slippery When Moist – obviously a reference to the Bon Jovi album [Slippery When Wet]…

SC: Is that something you grew up on?

RL: It wasn’t for me. Basically the name came because [comedian] Reggie Watts suggested it and we laughed out loud.

KM: I didn’t own that album when I was a kid. But I’m from New Jersey, that’s about the only connection.

SC: Have most of the songs already been released?

KM: Most are out there in some form or another. Three of the songs are mini-songs.

KM: Oh yeah, “The Google Song” isn’t out there. Everything else is either a couch video or a real video or both.

SC: Those videos of just you guys sitting around, you make them look effortless.

KM: There have been times we’ve got it done in three or two takes – the worst song medley was in one take. But then there was one we had to call it. I was so frustrated.

RL: What was the one where I couldn’t stop laughing?

SC: You performed “Save the Rich” with Weird Al Yankovic.

KM: He’s got such a powerful voice too, he sounds amazing. It made it a whole other thing.

RL: He’s such a nice guy. And obviously, the most successful comedy musician of all time. So it was pretty flattering to be able to play with him.

SC: Did you pick his brain a little or were you too intimidated?

RL: I think a little bit about both. His experience is so different from ours. He’s such a nice guy.

SC: I guess because of the different eras.

SC: The “douche” song – do you think that’s particularly an L.A. song?

RL: I did until I saw Jersey Shore.

KM: And then also traveling. We’ve seen versions of the douche song in other parts of the country.

Video – Garfunkel & Oates, “This Party Took a Turn for the Douche”:

SC: What about the HBO show you’re involved with? Would that be kind of a Flight of the Conchords kind of thing, with music and a little bit of plot thrown in?