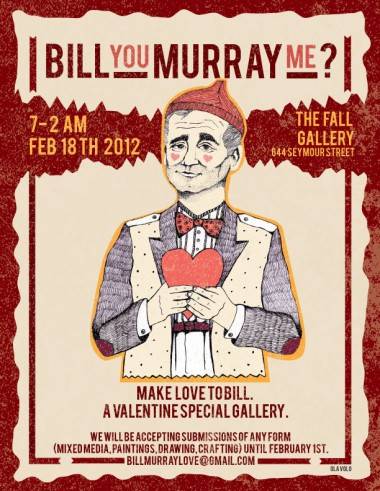 Despite a career spanning nearly five decades, Bill Murray seems to have a struck a nerve for one role more than any other. Christina Chant, who is curating Bill You Murray Me – an art exhibit and tribute by Vancouver artists (and non-artists) to the actor – says that there has been an overwhelming number of submissions based on Murray’s titular role in the 2004 Wes Anderson movie The Life Aquatic with Steve Zissou.

Perhaps this has something to do with the average age of the participants – Chant herself is 25, and a number of the submissions are from friends of hers. Or maybe Murray is just easier, or more absurd, to draw as an aquatic adventurer.

Whatever the case, it got to the point where Chant had to ask people to stop with the Zissou-themed pieces and start submitting based on other Murray roles. Perhaps someone took up the challenge and tried a piece based on the subject’s turn as the voice of Garfield?

We’ll get to see what came in second (and third) after Zissou tomorrow night (Sat Feb 18) when the FALL Gallery hosts Bill You Murray Me? As of this writing, Chant said that she was in talks with the gallery to extend the run of the show for another two or three weeks.

Either way, she’s thinking of summer and fall shows, featuring artists’ interpretations of the Spice Girls and Star Wars, respectively. 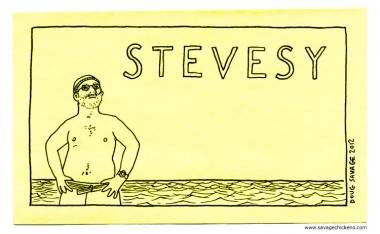 “Stevesy” illustration by Doug Savage for Bill You Murray Me, Feb 18 at the FALL Gallery in Vancouver. 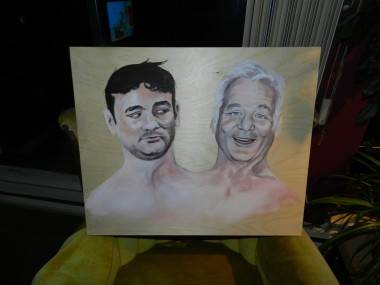