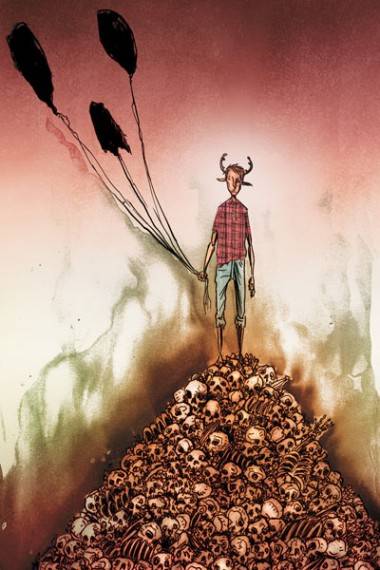 Essex County‘s small-town Canada setting and oh-so-Canadian storyline (hockey plays a major part) might have doomed it to obscurity. For some reason though these ostensible disadvantages worked to the comics’ benefit; Jeff Lemire’s graphic novel earned him some awards (the Joe Shuster Award for Best Canadian Cartoonist and the Doug Wright Award for Best Emerging Talent) and was championed by Sara Quin of the musical duo Tegan and Sara in last year’s Canada Reads program, which attempts to select defining Canadian literature. The book also led, indirectly, to Lemire’s current job as writer for DC’s Animal Man reboot. It’s as though FUBAR was a hit at Sundance or Trailer Park Boys got picked up by NBC.

Lemire’s Sweet Tooth series for DC’s Vertigo line is the bridge between the two; as a post-apocalyptic road story, it’s less personal than Essex but also not as rule-bound as the mainstream superhero series Animal Man. In Endangered Species, which collects issues 18-25 of the comic, Gus – aka Sweet Tooth – and a small group of survivors, including a couple of fellow mutated children born with animal deformities (Gus has antlers) – are on their way to Alaska. Along the way some back stories are fleshed out, allegiances are formed, and a recluse living in a dam encountered. There’s also a bear attack. And lots of ominous foreshadowing. And I mean lots.

And that’s the major problem with Endangered Species, which feels like one of those episodes of a TV series that’s just filling air-time between the season opener and the finale.

Then again, judging by the book’s awards and accolades in places like Amazon, I’m probably one of the few who didn’t much like Essex County, which I found kind of sappy and dull. Like Essex County, Sweet Tooth gets by on too much sentiment brought on by doe-eyed little kids (bland Gus would be played by Michael Cera in the movie version). Nor am I a huge fan of Lemire’s blunt art; he’s okay at those doe-eyed kids, but his bear looks like a smear of peanut butter.

For this comics fan, at least, Sweet Tooth is second-rate Vertigo. I was mildly intrigued by some of the story but not enough to pick up another issue. If you’re a fan of Lemire and Essex County, though, it’s worth checking out. I just might not start with this collection.