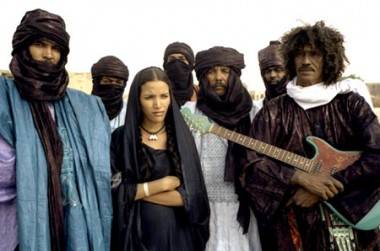 Tinariwen will not be playing this weekend's Vancouver Folk Music Festival.

Earlier today we reported on a Vancouver Folk Music Festival press release that Malian Tuareg group Tinariwen had been denied entry into Canada and weren’t able to perform at this weekend’s folk festival.

The musicians have just released this statement:

The members of Tinariwen deeply regret the cancellation of our performances at the VancouverÂ  and Winnipeg Folk FestivalsÂ  due to the refusal of our applicationsÂ  for Canadian visas.

These were the two largest shows on our current North American tour and we had been very much looking forward to them. The loss of these opportunities is catastrophic for us, both personally and professionally.

We have received visas to enter Canada almost every year since 2004. We are continuing our petition for visas for another tour in November and are doing our best to identify and resolve any issues preventing a successful outcome.

The musicians, crew and management of Tinariwin extend our heartfelt gratitude to all our friends in Canada for their support, especially the presenters of both festivals and the several Members of Parliament who have spoken out on our behalf.

In a press release released this morning by the Vancouver Folk Music Festival, festival organizers expressed their disappointment that the internationally renowned Malian Tuareg group Tinariwen, which was scheduled to perform Sunday July 17 in daytime workshops and in a featured spot on the festival’s Evening Main Stage, would not be able to appear.

According to the press release, “The band, currently on tour in the United States, received the news while in Los Angeles prior to heading north for dates in San Francisco and Seattle and, it was eagerly anticipated, at the Vancouver Folk Music Festival.”

Festival Artistic Director Linda Tanaka is quoted as saying, “This decision is incredibly distressing and confusing. The group has been granted approval to enter and tour the United States with no apparent problem, yet have been denied entry here.” Her statement goes on to say that the group has a long history of international touring, and performed in Vancouver as recently as 2010 as part of the Cultural Olympiad.

“They fully complied with their visa restrictions then, and there is no reason to expect this visit would be different. This inexplicable decision is a blow to the festival, to the artists and to their many dedicated fans in this city.Â We will continue to get to the bottom of this situation and hope to invite the band back at a later date.”

More from the press release: “Tinariwen had initially applied for visas at the Canadian Embassy in Paris and were denied, forcing them to cancel their appearance at the Winnipeg Folk Festival earlier this month. The Vancouver Folk Music Festival, along with the group’s North American representation, explored every avenue available to provide assurances to Canadian officials about Tinariwen’s Vancouver performance. The Canadian Embassy in Paris as well as the offices of Members of Parliament Dr. Hedy Fry and Ms. Libby Davies sent letters in support of Tinariwen’s re-application in Los Angeles: Dr. Fry’s to the Canadian Consulate in Los Angeles and Ms. Davies’ to the Minister of Canadian Heritage and Official Languages, The Honourable James Moore. Dr. Fry was particularly distressed that she had received no reply to her letter as of 4:30pm on July 14.”