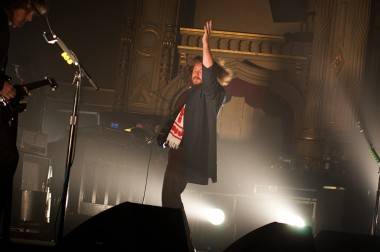 Review and photos – My Morning Jacket at the Orpheum Theatre, June 29 2011

The Orpheum was strangely quiet as L.A. rock band Everest prepped the audience for rock behemoths My Morning Jacket.

Like most, I have grown accustomed to bands rolling onto the stage around midnight, but the organizers must have remembered MMJ’s vigorous four-hour set at 2008’s Bonnaroo, and scheduled an early show accordingly. In fairness, the multidimensional group had a lot of ground to cover (their latest record, Circuital, is their sixth studio album in 12 years), and they weren’t about to short-change thousands of their loyal Vancouver fans. Also, a portion of ticket sales were being donated to the Arts Umbrella, a local charity that inspires kids through art. With all these factors in play, I was certain the rock behemoths would not disappoint.

The crowd politely sat through Everest’s melodic, ’70s-inspired compositions. Clothes pressed, legs crossed, eyes and ears fixed on the band, the audience was on their best behaviour. Even lead singer Russell Pollard couldn’t ignore the sense of decorum in the theatre, noting, “You’re a very polite, very nice audience”. For a minute I was fooled into thinking it would be a relaxed Wednesday night.

But everyone’s inhibitions flew out the window as soon as MMJ made their appearance. Folks leaped off their seats and broke out their air guitars, fans screamed for MMJ every ten seconds, and some chicks began to pull out some head-down, ass-to-the-air dance moves. One enthusiastic and knowledgable gentleman created his own game of “Name That Tune”, screaming out MMJ titles within two or three notes. (The first half of the setlist below is brought to you by this enthusiastic fan). 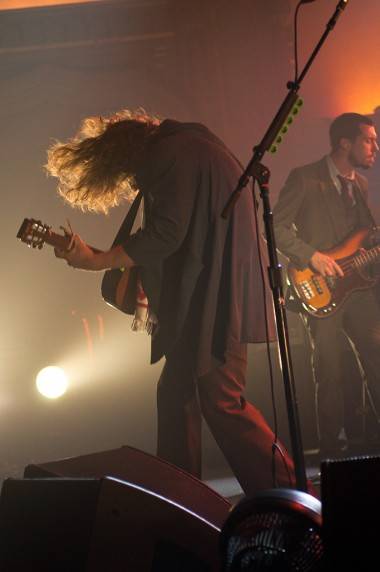 The smoke machines left a heavy haze in the room, and the ghoulish intro to “Victory Dance” made for one dramatic entrance. All the volume in frontman Jim James’ trademark beard seemed to travel to the hair on his head, which he liberally whisked back and forth throughout the night, a bright smile permanently plastered on his face. Quirky and jovial, he bore a close resemblance to the adorable teddy bear in a poncho that sat on top of his amplifier.

James looked like he was having the time of his life, sliding across the floor a total of three times, prancing around in a cape like Bela Lagosi, and all the while tearing it up on the guitar and belting out every note flawlessly. The same could be said for guitarist Carl Broemel, who frequently stretched out onto the crowd for his virtuoso solos. 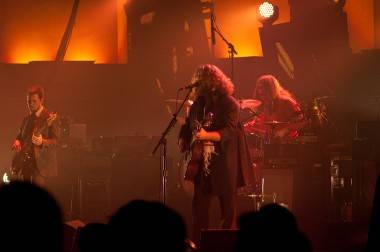 The night was packed with songs from every one of the Louisville, Kentucky band’s albums, so James managed to speak to the crowd only briefly. During one of their interludes, he noted how the architecture of the Orpheum reminded him of the disturbing scene in Return to Oz where the evil witch reveals the room that holds her collection of heads. I had been trying to erase this haunting image from my memory for years, only to have it re-emerge in the most unlikely situation. But my childhood fears disappeared as soon as James began playing the soothing, uplifting “Wonderful”.

The changing visual backdrop on several vertical screens set up onstage expressed the tunes’ moods. On “Slow Slow Tune”, fall images matched the raw and serene song. But for the more synth-pop “First Light”, neon and pixelated graphics were projected behind the band.

Chameleons by nature, MMJ’s fearless and ever-evolving sound is what keeps fans loyal and interested over the years. 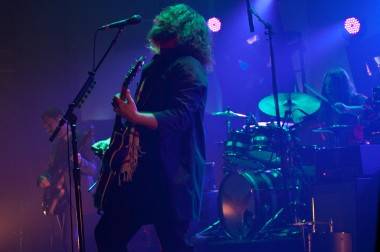 3 responses to “My Morning Jacket at the Orpheum Theatre”