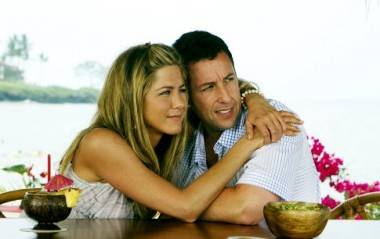 Who wouldn't want to see these two end up happily ever after?

When the chance to attend a recent press screening of the latest Adam Sandler film, Just Go With It was presented to me, my immediate reaction was, “Sure, why not?”

Although not really a fan of Sandler’s per se, I am genetically predisposed to finding him somewhat charming. I thought he was great in Punch Drunk Love and will admit to really enjoying Big Daddy when I saw it in the theatre (due in part, no doubt, by Jon Stewart).

That being said – Jennifer Aniston’s enduring popularity as a film actress absolutely confounds me. I will be upfront about my huge bias.

Everything you need to know about the implausibly “madcap” premise behind Just Go With It can be gleaned from the film’s trailers and posters. This is, unequivocally, one of those “feel good” (ironic quotations) movies in which the moviegoer – as a presumably functioning member of society – is certain of the ending before the opening credits are wrapped. That being said, if you are concerned about possible movie spoilage then let me just say, “meh” and urge you to read no further.

The film opens in Sandler’s seemingly favourite go-to thematic mise-en-abyme: the ’80s-era wedding. A young and yarmulked Danny Maccabee (Sandler) overhears his soon-to-be-bride incriminate herself with predictably shallow JAP-y behaviour by calling his sister “ugly” and comparing his family’s distinctive proboscis to a zucchini. The lovelorn Maccabee ditches his bride and finds himself drowning his sorrows at a bar, only to find that the wedding band he neglected to remove is a magnet for The Shiksa Goddess.

Cut to 20 years later, where the heartbroken and weary Sandler is a plastic surgeon and whose schnoz downgrades from Orthodox to Reform and whose non-committal love life is ruled by the precious prop. When used in conjunction with any number of pathetic falsehoods, the wedding band ensures empathy and a steady stream of sexual encounters from shiksa goddesses in the greater Los Angeles region (interestingly, Macabee is a Hebrew name with strong mythical overtones and loosely translates as “the hammer”).

“Being fake-married is the way to make my heart never get broken again,” utters this new breed of Hebrew Hammer. Eventually the anti-Pinocchio finds himself entangled in a big whopper with the Shiksa Goddess of his dreams, a hollow headed hottie named Palmer (Swimsuit Illustrated covergirl Brooklyn Decker). In order to maintain the fabric of the lie he has so carefully woven, he must enlist the help of his office assistant, Katherine (Aniston) and her irritating children as support.

And they go to Hawaii! (Another favourite Sandler setting.) 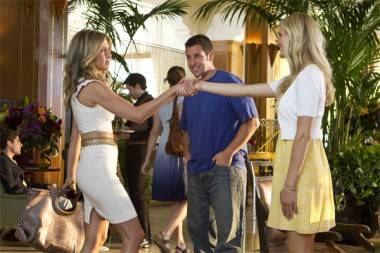 There are a few funny moments in the film – mostly sketch-like sight gags having to do with the ridiculous effects of plastic surgery (get it? He practices in a field all about being fake). Former Saturday Night Live alum Kevin Nealon and Rachel Dratch have some nice screen time here in this capacity.

And Nicole Kidman has a small part in the film as Katherine’s lifelong nemesis in a role which may be Kidman’s answer to Tom Cruise’s turn in Tropic Thunder (albeit less successful). Certainly, Kidman’s own high-profile plastic persona does play well into the overall theme of the film. As an actress who has remained publicly “tight-lipped” about her own transformation, it is somewhat amusing that she would play into something so dependant upon her own self-awareness.

Because her hair looks amazing. 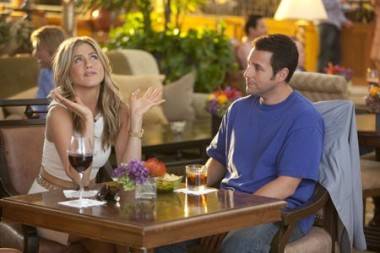 Jennifer Aniston and Adam Sandler in Just Go With It.

I walked away with two things from this movie. First, an appreciation for the magic of properly applied frosted taupe eyeshadow and a well-layered haircut. Aniston and Sandler have zero onscreen chemistry, resulting in a lot of tedium; whenever she was on-screen I just started at her perfectly spaced highlights and wondered what products got used on her tresses. Aniston is gorgeous in an understated way, a way that we all ought to aspire to. When much of the film was happening I found my brain zoning out from the dialogue and focusing instead on Aniston’s hair and make-up (which is also the reason I watched Friends). Needless to say I have a renewed interest in neutral eyeshadows and have since booked myself in for a haircut.

The second thing that struck me is how utterly unlikable both the leads in this film are. Aniston’s post-Pitt career has been marked by her pop-culture designation as a “slighted woman.” That she would actively portray a character involved in such an implausible lie – ostensibly, tricking some innocent woman (even if she is a shiksa bimbo) into believing some outlandishly heinous untruth about a man, so that she might be fooled into marriage by him – is unequivocally offensive.

I don’t think the aspect of her character in this capacity is meant as a play on her offscreen persona, but it does effectively act as a barrier for me to liking her in this movie. And by liking her I will extend that to her character in the film and her as an actress for perpetrating a female characterization which is, at heart, venomous and anti-woman. I’m a stern believer in upholding the unwritten rules of Girldom, “The Girl Code.” While we expect men to lie to us and be pigs for their own reasons, we must not tolerate other women playing into it.

Ultimately, though, it was the offensively shallow implausibility of the whole thing that left a stain on what otherwise may have been a semi-amusing, predictable “feel good” movie experience. I can handle digs as JAPs (having been at the centre of a swarming episode or “JAP attack” at my summer camp) and the continued use of fat chicks as visual punch-lines (however lazy a tactic that may be), but pitting women against women without any real reason just makes me angry. There was no Mean Girls-esque “frenemy” relationship established between Katherine character and Palmer, so why a woman would involve herself so deeply in such a ridiculously hurtful ploy at the behest of a man just seems… well, any number of things.

Meh. But did I mention how awesome Jennifer Aniston’s hair was? 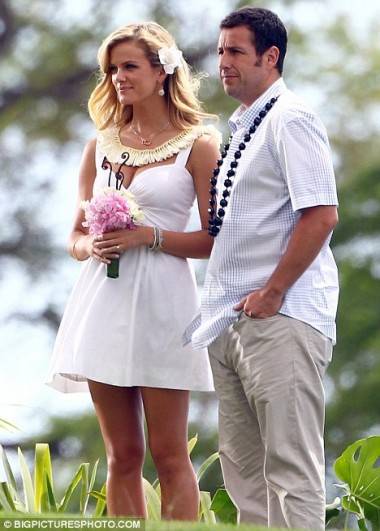 Brooklyn Decker and Adam Sandler in Just Go With It