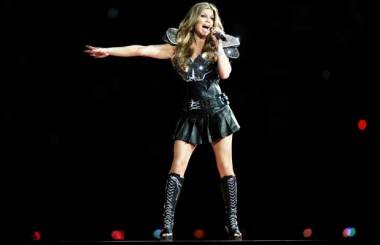 If nothing else – and, by “nothing else”, we mean even if it completely failed in any kind of musical-performance way – the Black Eyed Peas’ halftime Superbowl show certainly has people talking.

Interestingly, some people are actually defending the performance. It could simply be that the heavy use of Auto-tune and Slash doesn’t offend people as much as maybe it should. Or the fact that, as soon as the band ended its medley of hits, the screen behind them was filled with the name of their latest album, The Beginning. But then, no one should be surprised by this kind of shameless hucksterism (I’m sure The Who were sorry they didn’t think of it, although since their last new album was in the 1980s it probably wouldn’t have done them much good). Although, even Internet hacks were calling the selection of songs “tired” (Us Magazine!) and “stale”.

Here are some links to some of the better examples of reaction to the Black Eyed Peas’ half-time show:

2 responses to “Black Eyed Peas halftime show – did it suck or was it just terrible?”