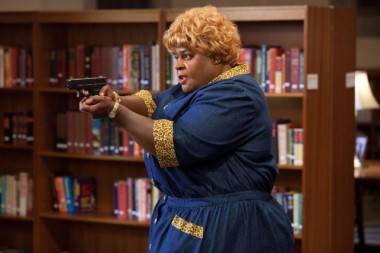 2011 is looking to be a banner year for fans of atrocious cinema. We’re not even two months into the year and already Hollywood has given us The Roommate, Just Go With It, I Am Number Four and Season of the Witch. We hardly dare ask for anymore; however, Martin Lawrence has heard our silent pleas.

Big Mommas: Like Father, Like Son is the third in a series where the comic actor dresses in fat-suit drag. Apparently, even this sure-fire recipe for hilarity offers diminishing returns, if stuffy critics are to be believed:

“It is impossible to overstate this film’s terribleness.” – Simon Abrams, Slant Magazine

“A film so drained of entertainment or simple humanity it is difficult to relate to as anything other than industrial artifact.” – Mark Olsen, Los Angeles Times

“While sitting through this embarrassing piece of sh*t, I almost contemplated drowning myself in the toilets of the Savoy by repeatedly flushing my head under the bowl until the pain went away.” – Mike Sheridan, Entertainment.ie

“This sequel to Big Momma’s House and Big Momma’s House 2 is a rancid, unwatchable load, devoid of mirth and joy, and an enemy to all that is good… If you love the sloppy, unfunny slapstick of the Big Momma’s House movies but always wished they were more like deleted scenes from High School Musical, this is definitely the movie that you should ask your caretaker to let you see the next time you’re permitted to leave the group home.” – Eric D. Snider, Cinematical

But is Big Mommas: Like Father Like Son really the worst reviewed movie of the year so far?

Well, it’s definitely in the running. According to Rotten Tomatoes, Big Mommas‘ 10% approval rating puts it ahead of I Am Number Four (28%) and Just Go With It (18%). However, it’s got a ways to go yet before it’s as reviled as The Roommate (6%) or the Nicolas Cage witch-transporter spectacle Season of the Witch, with its whopping 4% approval rating.

Stay tuned; Guttersnipe will be watching the reviews, if not the actual movies. And with a bunch of super-hero flicks (including Thor, Green Lantern, X-Men: First Class and Captain America: The First Avenger!) coming down the pike, 2011 can only get worse… or better.