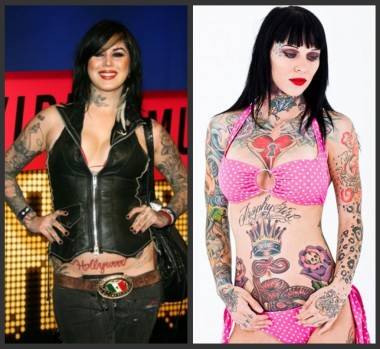 There’s been a lot of media chatter lately about Jesse James‘ love life.

Consider: one of the women with whom he was (allegedly) fooling around behind Sandra’s back is someone called Bombshell McGee. Now James is apparently engaged to Kat Von D. McGee is speaking out on this latest hook-up, warning Kat that Jesse doesn’t have a faithful bone in his body. Shocker!

What confuses us is that we thought Kat Von D and Bombshell McGee are actually two different people, since somehow in our mind they kind of melded into the same thing. 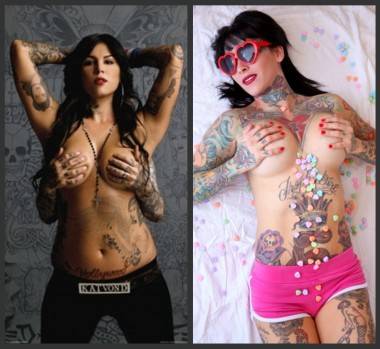 Only Kat can afford to hire someone to hold her boobs!

Now, in the interests of notÂ  inking both ladies with the same needle, and to help our readers differentiate between the two, we’ve compiled a few points of interest that should help us all, as well as Jesse James, keep the two straight. 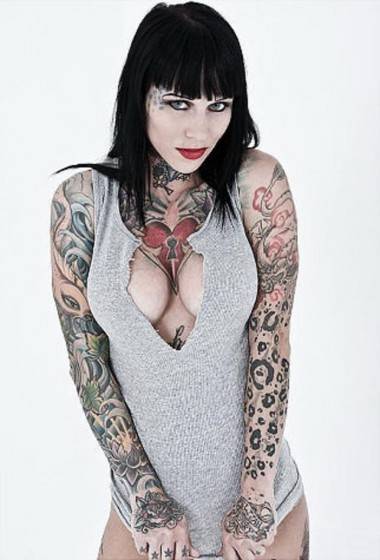 The facts: Michelle “Bombshell” McGee is a 32-year-old stripper with tattoos covering 90% of her body. (Not sure what the other 10% is covered with.) If one day she decides to remove her tattoos, she can put her trust on sites such as Ink Anxiety. She is a single mom with two kids and before going into the entertainment business was an autopsy technician in a morgue.

Website: McGee’s “About” bio on her website is rife with typos. It also reeks of desperation and ill-advised (probably self-penned) hype. For instance: “Michelle’s popularity has captured world wide attention in news outlets set to tantalize the public’s insatiable appetite for this global phenomenon.” That doesn’t even make sense.

“In high demand as a feature dancer, Michelle is one of the most sought after celebrity entertainers in the world. The combination of her mainstream media appeal, cult status and crossover talents in the adult entertainment industry provide for a unique package, the likes of which have never been seen before.” Never been seen before? Well, that might be accurate, but not in a good way. There follows an invitation “(serious inquiries only)” that goes: “If you would like to contact me for an event or to discuss business opportunites, email me to make arraignments [sic].”

Cashing in: The site advertises “Filthy Whore” tank tops for $23 and promises that “‘Evil Cunt’ and other upcoming Michelle Bombshell designs are on the way.”According to an Oct 19 2010 article on Australian website WA Today, McGee is also selling T-shirts that say “Home wrecker”. Hey, she’s just taking back the conversation, as Camille Paglia might point out.

Most ill-advised career move: Dressing in Nazi regalia for a photo shoot. 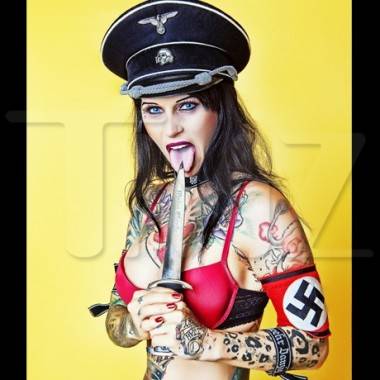 The facts: 28 years old, born in Mexico to Argentinian parents, Kat Von D is a California-based tattoo artist. She, like her inamorata Jesse James, is also a reality-TV star (L.A. Ink).

Website: A friend named Kore Flatmo has written the bio, and it’s somewhat more coherent than McGee’s, if longer and filled with more info than a Tom Clancy novel. Also, judging from the site, Von D is at least a savvier business woman than Bombshell, and a legitimate artist.

Also, remember those good old “links” pages, wherein the artist or whomever would share links of their friends etc? Well Von D has a whole page of them, including “music” (you will be shocked to know Kat is a fan of Steel Panther and Motley Crue), “friends” (Margaret Cho, Denise Richards, Tom Green and Nikki Sixx among them), and “beauty” (Sephora).

Also the site has a page dedicated just to quotes about Kat Von D (thank God they’re not quotes by her, I guess). A couple of them are even amusing.

Cashing in: Books (two, which she’s ostensibly written), a line of clothing (ugly, but whatever), and the reality-TV show – you almost have to feel sorry for Bombshell, who sells her image by appearing at things like Sexpo in Australia. 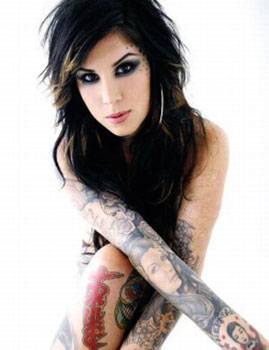 Went out with Nikki Sixx.

Most ill-advised career move: Not giving an interview to Guttersnipe when she passed through Vancouver.

Conclusion: While Kat Von D is clearly the one with more going on, i.e. business- and talent-wise, it’s hard not to be more sympathetic to Bombshell, who is just trying to get by, it seems. Von D is set for life; for Bombshell, the struggle continues. Meanwhile, somewhere, Jesse James is welding two pieces of metal together.