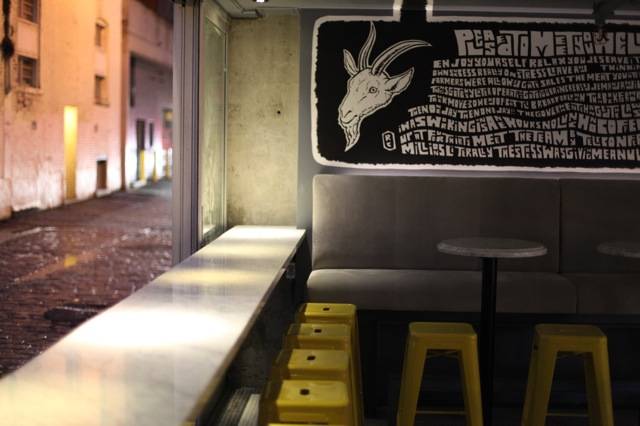 What do you do after a wine-tasting on a mega-rainy Vancouver night? Explore the alleys and byways of Gastown, of course.

Jules was dismissed by my companion as being merely adequate (I’d never been); Salt was familiar, maybe too familiar. Both Six Acres and the Diamond called, but Judas Goat won out for novelty’s sake.

Just a few doors down from Salt Tasting Room, Judas Goat (27 Blood Alley) is a Spanish tapas-style 28-seater. It opened three weeks ago, under the ownership of Sean Heather, who is basically the don of Gastown; it wouldn’t surprise me one bit if we woke up one day and Gassy Jack’s features had been remodeled to resemble those of the owner of a good chunk of this postal code.

One of the first things I noticed was a collection of Tintin memorabilia (Heather’s, we were told) on a shelf, as well as the jumble of script (a “text mural” by writer Robert Chaplin that ties in with the concept of a “Judas goat” – the goat that makes nice with the other animals and leads them off the truck to slaughter) on the west wall.

Service was extremely helpful and the beer selection modest but interesting, and included the White Bark wheat ale and a Philips IPA (I chose the latter, having had my fill of wine). For food, we shared a beet salad (it was okay – to be fair, it’s a difficult salad to make rave-worthy), the pressed roasted vegetables (delicious) and the slow-cooked (in a paprika sauce, if memory serves) sablefish (likewise).

One of the staff explained that the idea behind Judas Goat is a moderately priced place where people can have a quick bite or stay for two hours; if packed, the Goat also provides the service of calling you during your Gastown crawl to let you know a seat’s opened up. And on slow days, Sean Heather will even come pick you up and give you a tour… (Just kidding!)