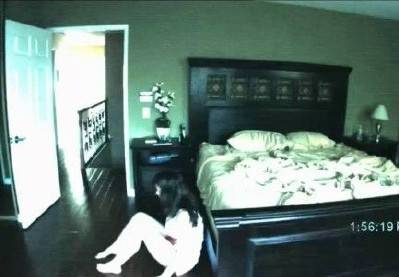 A scene from Paranormal Activity.

Scurrilous Ephemera Oct. 26 2009 – Paranormal Activity vs. Saw VI. Plus: LaToya Jackson in contact with the dead.

In some bright news from the culture front, Saw VI seriously “underperformed” at the box office this weekend. Though this idiotic franchise makes Friday the 13 movies look like Hitchcock in comparison, evidently the producers still expected millions of dumb teenagers to flock to it, which they did not. Hollywood is going to have to seriously re-evaluate the stupid crap it foists on the public this time every year, which is good news! The movie that did do very well, and did it on a $15,000 budget, was Paranormal Activity. I’d like to describe it, but I’m kind of deranged from lack of sleep since I saw it a couple of days ago. DO NOT see this movie if you enjoy snoozing without waking up constantly to the realization that there is a huge, very evil demon shadow hovering over you. Just wait – certainly by this time next year Hollywood’s Paranormal Activity 2 starring Megan Fox will be safe to watch.

In other otherworldly drama, the very sane and balanced (sarcasm) LaToya Jackson has explained to The Mirror that she regularly chats with Michael when she visits his house and is trying to get him to tell her who murdered him. He likes to communicate through blinking the house lights off and on, though unfortunately she is the only one who has experienced this. Michael, if you are out there, please speak to your mother Katherine, she is the only one not hindered by mental illness, chemical or fame dependency. Use your parrot, Michael, to tell her you would like to rest in peace and not have your precious children exploited by reality television.

It has been determined that both Lindsay Lohan and some girl from The Hills, Audrina Patridge, had their houses robbed by a fearsome horde of ruthless criminals known on the street as “The Hollywood Hills Burglar Bunch”. Yikes! That truly strikes terror into the heart. Is anyone safe from these obviously gifted creative geniuses who can infliltrate the lives of intelligent, worldly celebrities and run off with their valued possessions? But more importantly, certainly there is a story here. What’s the story? In what way did they become the Burglar Bunch?

Morrissey collapsed on stage in England two days ago, and is in hospital, listed in stable condition. Great. Just what we need: another thing to be depressed about in this pathetic, lonesome existence. As if living wasn’t horrible and meaningless enough, fate has foisted upon us another of an eternal string of abjectly miserable experiences on top of this endless pile of sorrow that is life, a wretched, overwhelming sadness punctuated only by brief respites of rejection, shame and remorse. Thanks for reminding us, Morrissey, yet again how horrifying is this vortex of despair we inhabit together. You are a brave, yet adorably tortured soul. Get better soon!