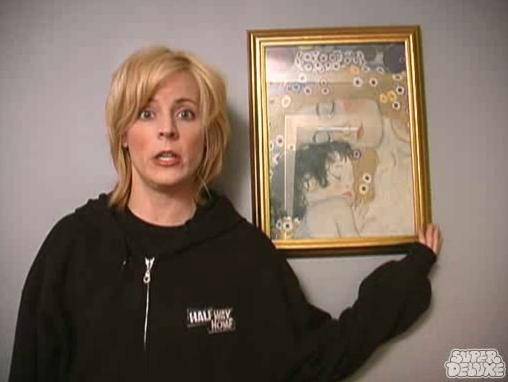 Maria Bamford in a scene from her Super-Deluxe video series.

Not that the male comics that appeared the XM Radio’s Maple Leaf All Stars show at the Media Club Sept. 25 and the early Headliners and Hot Shots show at Yuk Yuk’s the following night weren’t funny. It’s just that nearly all of them made jokes about jerking off and homosexuality. Although there was one guy who at least set his to an acoustic guitar.

Ms. Bamford performed at both the above shows (as well as Thursday, Sept. 24, with Comedy Death Ray at the Vogue) and, though it was more or less the same set, it killed both  times. She opened both sets with her ridiculously stereotyped take on geography, and her wicked impression of her Type A-personality sister. (Both routines are on her latest CD, Unwanted Thoughts Syndrome.)

Of the nearly dozen comics in those two shows, Bamford was one of the only females; the other, at Headliners & Hotshots, was Natasha Leggero. A regular roundtable panelist on Chelsea Handler‘s show Chelsea Lately, Leggero was a little uneven. But her description and extended riff on the reality TV show I Didn’t Know I Was Pregnant was one of the best things I saw at the fest. She even seemed to come up with a new concept on the spur of the moment – I Didn’t Know I Was Getting Fucked!

As for the guys, some of the highlights were Brent Weinbach, who asked “Who’s excited by smooth jazz?” and did some funny riffs on heaven vs. hell and Bernie Madoff (“Did he have to look so Jewish?”), and Moshe Kasher, both at Headliners & Hot Shots. Jon Dore, at the same show, has some brilliant stuff, like a prank call to his sister that backfires. Nick Thune, who appears in the new Mike Judge movie Extract, at least added variety to his jerk-off and gay jokes by accompanying them with his acoustic guitar picking.

Special mention should go to MC Graham Clark, a Vancouverite whose stuff is of the it’s-funny-cos-it’s-true school. Clark noted how advertising is very different depending on whether you’re in the bus or out. On the outside: Come try this new restaurant… get a spa treatment… enjoy a vacation. On the inside: “Thinking about going back to school?” “Pregnant and scared?”

At the Maple Leaf All Stars show Friday, Dave Shumka did some logic stuff, asking why we say “Does a bear shit in the woods?” when someone asks a question with a supposedly obvious answer. What if we responded instead with “Does Dairy Queen charge more to substitute onion rings for French fries?” Another local, Charlie Demers, did some nice stuff on Thai food at the White Spot (a B.C. restaurant franchise that is literally one of the whitest spots on Earth) and interracial marriages.

I thought comedy had moved past the gay/jerk-off routines. But maybe this stuff just never goes out of fashion. In which case, maybe the best you can do is accompany yourself on acoustic guitar.