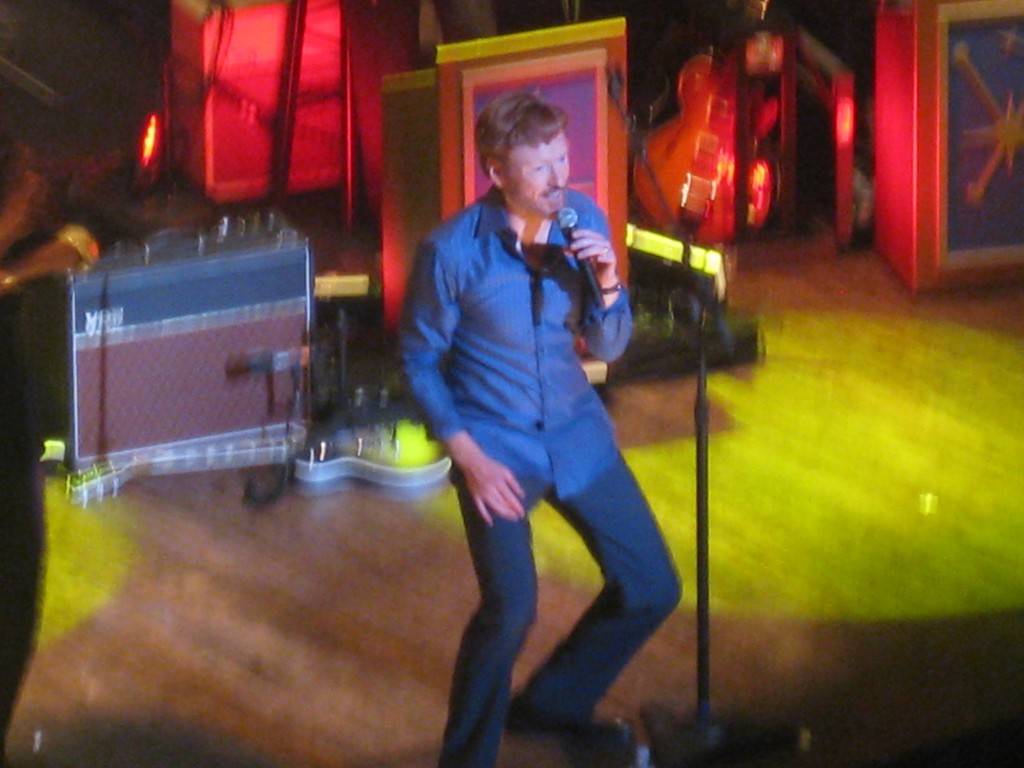 The day that Conan O’Brien closed his final Tonight Show taping with “Free Bird” marked a dark period for all the insomniacs, cramming university students and couch potatoes of the world. But after his highly publicized and controversial split with NBC, the resilient and charismatic ginge licked his wounds and set out on a 32-stop national tour aptly entitled “Legally Prohibited From Being Funny on Television”.

La Bamba and the crew were on board to welcome the Vancouver crowd with a couple of big band numbers before the late-night bastion hit the stage of the majestic Orpheum Theatre. The audience roared as Coco, wearing a Canucks T-shirt that a fan had given him the night before, finally hit the stage. No applause signs were necessary this evening.

Conan O’Brien didn’t shy away from the elephant in the room and discussed the eight stages of grief he had endured from losing his late night post. The whole room was in knots as he noted the irony of how Snooki from Jersey Shore could manage to stay on the air with no discernible talents, while he was given the boot after over two decades of comic writing and performance for the media conglomerate.

But O’Brien [recently signed by TBS to host a new talk show. – Ed.] showed the audience that when life gives you lemons, you bring out the Self-Pleasuring Panda and the inflatable bat from a Meatloaf tour, and all will be well.

Long time Conan O’Brien collaborator, Andy Richter, joined his former boss for most of the show. The comfort level between the two set the intimate tone of the evening, despite the venue’s grand size. At one point, Richter scanned the audience with his hand-held camera for some potential groupies, focusing on one very pregnant lady, and another woman who wanted to expose a “pair” of her O’Brien fans. They also led the audience in a scripted conversation that resulted in O’Brien licking La Bamba’s face, apparently tasting like junk food.

Demonstrating his underrated guitar and vocal skills, Conan O’Brien graced the audience with a few musical numbers. He jazzed up the audience with his renditions of the rockabilly hits, “Polk Salad Annie” and “Forty Days”, as well as Cake’s version of “I Will Survive” and Willie Nelson’s “On the Road Again”.

A few unexpected stars also made appearances in support of O’Brien. Fellow comedian Deon Cole filled in a few minutes of the hour-and-a-half show with his latest material, Seth Rogen dropped in to pull the famous Walker Texas Ranger lever, and Triumph’s insults were received by an appreciative crowd.

Although the title itself referred to Conan O’Brien’s legal battle with NBC, there was no room for hostility or pity on this tour. A true gentleman, O’Brien dedicated the show to his loyal supporters, performing new and old antics worth every penny to see live.