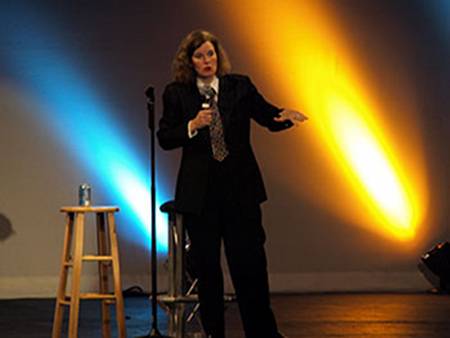 Up until her PBS days I hadn’t followed Paula Poundstone at all, but a recent Google search revealed her dark troubles with the law. A lot of comics booze it up at some point in their career anyway so I didn’t let that cloud my judgment.

Poundstone wasted no time connecting to the Vancouver audience by bringing up the latest Britney Spears concert, and investigating the matter by asking the audience what really went on. “Weed,” the majority stated. “We are famous for it.” “Really?” she said, acting naÃ¯ve toÂ BC culture.

Another audience member had the most high-pitch laugh that can best be described as an off-key squawk that continued to scream throughout the half-filled theatre in the two hour set. Even Ms. Poundstone could not keep a straight face from the bird-like sound, and sporadically commented on it, eventually blurting, “Seriously you’ve had this your whole life and no one has fixed it?”

Commenting on the California education system, Poundstone mentioned how, when her un-motivated daughter asked what she can look forward to as a young adult, she quipped that she can be “tried as an adult.” She also talked about cheap ways to avoid the ridiculous US medical system–“… I got my broken wrist X-rayed at the carry-on scanner at the airport…”–to making a self-diagnosis by watching now legal TV pharmaceutical ads.

While Poundstone threw in some no-fail one-liners, such as poking Canadians (“… what kind of country puts Gene Wilder on the ten dollar bill?”), the most intriguing part was her constant inquisitive questioning of the audience members’ unique professions. “You, six rows up, what do you do?” The lady snarkily replied, “I’m a journalist.” After further investigation and cryptic answers from the pissy entertainment reporter. Someone yelled, “Is that Dana Gee?” Poundstone gasped “Dana G? As in Dana ‘GIGANTIC bigger better career?’”

This was the evening: chatting with the audience in a relaxed manner and sprinkling in some planned topics and some improvised banter on the huge scuff mark on the stage (“… did Liza Minnelli trip? She was just here two nights ago!”). The comedian’s relaxed quirkiness shone through when she turned her back to the audience sighed and said “Ah… nothing.” It’s unfortunate their weren’t more people to see that Poundstone still has that warm, quirky demeanor that I remember coming through in her PBS days. That comedic spark hasn’t left.

One response to “Paula Poundstone at the River Rock”