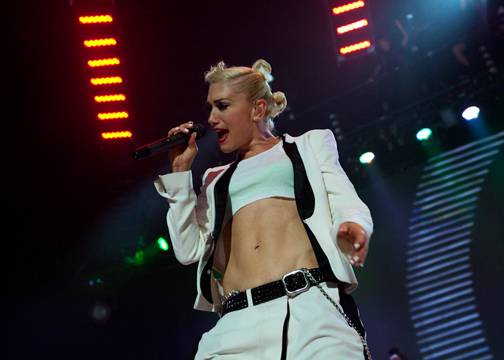 I wanted to like this show, really I did. Can’t say I was totally pumped, but I figured Gwen Stefani + crew would put on something fun and memorable. Well, it was, but it still seemed to be lacking a certain frisson, if you will.

But let’s not dwell on the negative. First, it’s gotta be said; outside of Iggy Pop, Stefani has the best stomach in rock. There’s no getting around it; this thing is a force of nature. Her abs oughta be insured by Lloyd’s of London.

Certainly without them the band would not be the No Doubt we know and fans love. Stefani’s aerobicized performances and uber-fit bod are as much part of the band as its rock-steady ska sound, as much as songs like “Just a Girl” (the final song of the set, and still the group’s best tune) and its soap-opera ballad “Don’t Speak”.

Unless she was exaggerating, this was the 42nd show of the tour, and the quartet – augmented by a couple of multi-instrumentalists, Stephen Bradley and Gabriel McNair – were like a very oily machine; not a note was out of place in the 90 minutes of non-stop ska/pop fun, which included a mid-set instrumental allowing Gwen to change into a new outfit that hid her stomach but showed off her legs. (Hey, what else was I going to look at – drummer Adrian Young‘s mohawk and eyeshadow?) 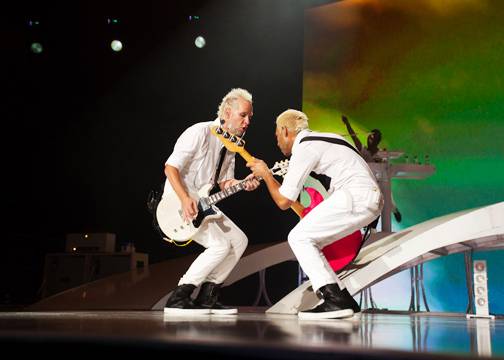 The stage set was a nicely modernist white, with ramps on either side, and the band too was dressed in white. An ab-cam and a very high definition screen gave an almost-but-not-quite-sold-out audience close-ups of the group members. Most if not all the songs had some sort of background visual accompaniment, whether a James Bond-opening-credits style clip or, during (if I recall correctly) Tragic Kingdom‘s “Different People”, old footage of the band in its “lean” (a relative term when it comes to No Doubt) years.

Which brings up another point: I’ve just about had it with bands’ self-mythologizing. Rancid did it, Green Day did it and now No Doubt; yes, there was a time you played small clubs, before you had personal trainers and macrobiotic chefs, when you actually – gasp! – had to do your own postering and promotion, and now you’re playing arenas. Great, way to go, now get over it. 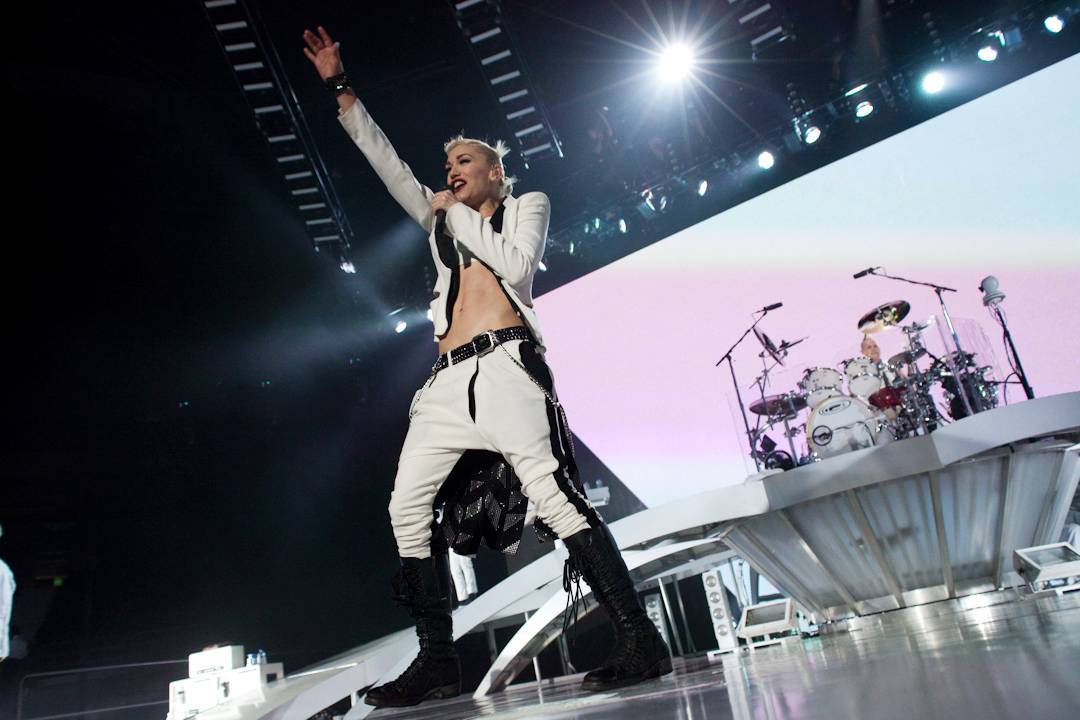 Anyway. In conclusion, I’d have to say it was a good show and not great, at least from a non-enthusiast’s perspective. On the other hand, I don’t think any fan left feeling they hadn’t gotten their money’s worth and that’s the main thing.

Then there’s Paramore. Just like No Doubt in its infancy, this Tennessee band suffers from Blondie Syndrome; that is, it’s fronted by a riveting presence, singer Hayley Williams, who makes you forget, to put it mildly, the rest of the group, i.e. the dudes. God bless ’em, whoever they are. (Although, there were times during Williams’ rather awful stage banter where paying attention to her fellow Paramores almost seemed like a valid alternative. Then again, to be fair, she is only 20.) 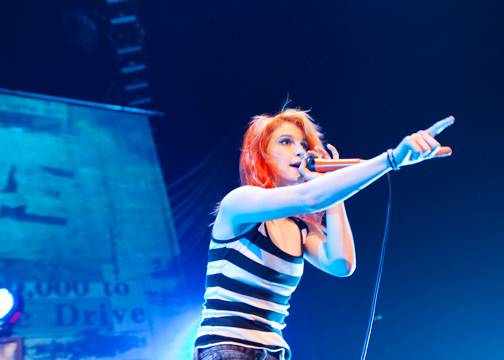 Unlike No Doubt, Paramore has shot to fame based on a song included on a soundtrack to a movie about a vampire that has stolen the imaginations of our nation’s female youth. Yes, in any discussion of Paramore, respect must be paid to the phenomenon that is Twilight. Of course, the band left this song, “Decode”, for last, and it was greeted with the biggest round of screams, since it put fans one step closer to sparkly vampire heartthrob du jour Robert Pattinson.

While much of their output sounds like generic hard/modern rock to these ears, surprisingly, the new songs – from a third album scheduled for a September release – sounded the strongest. Could it be that, isolated in Tennessee and having had two albums to hone its talents before the sudden burst of notoriety, Paramore might be getting better? Maybe personal trainers and macrobiotic chefs aren’t too far off.

4 responses to “No Doubt at GM Place, Vancouver”