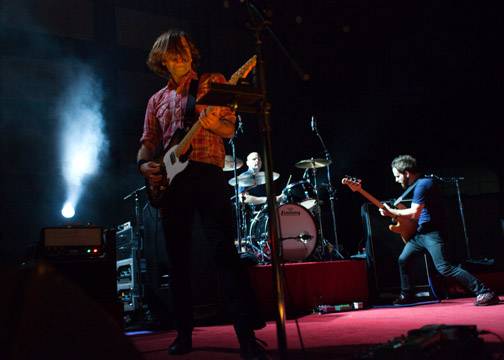 Review and photos – Death Cab for Cutie at the Pacific Coliseum, Vancouver, July 17 2009

The New Pornographers should be welcomed home with open arms, but instead, Vancouver’s own power pop supergroup were reduced to a “with guests” credit on last night’s Death Cab for Cutie bill at the Pacific Coliseum.

Perhaps the band took the affront to heart because while they sounded tight and delivered all the favourites – “Sing Me Spanish Techno”, “Jackie Dressed in Cobras”, “Your Rights Versus Mine” – the New Ps’ performance felt phoned in. Also, I’m 95 per cent sure Neko Case wasn’t there, although I’m quite blind and I swear I heard her singing, so I can’t say for sure. Either way, it doesn’t bode well for Neko or the band that I couldn’t tell the difference.

Dan Bejar, that elusive East Van mystic (sprinkle that sentiment with sincerity or sarcasm, but I, for one, dig the Dan), was offstage more than on, presumably to have another drink or take another toke. When he did appear onstage, his presence was a ghostly one–he mostly hung back, moving in only to spatter songs with his unearthly vocals.

Bejar is an integral part of the band, no question – his songs lend weight to the New Pornographers’ catalogue and I’m always drawn to his aggrandized, though some call it pretentious, poet persona; but last night he looked like he wanted to be elsewhere – like perhaps headlining his own show at the Biltmore, like he’ll be doing tonight under his Destroyer moniker.

With his bandmate’s solo show at the Biltmore in the offing, little Carl Newman all grown up and living in Brooklyn, and the fiery Neko Case as a big festival name in her own right, the New Pornographers seem a disparate, restless group. That said, while mechanical in execution, the band still delivered the awesome pop goodness and a bad show by the New Pornographers is still a great show by any other band’s standards.

For the sake of transparency I must admit that Death Cab for Cutie was an influential band during my formative years. I trolled the halls of my high school with my Discman clutched to my chest and Ben Gibbard’s reassuring mewls echoing in my ears. I wanted nothing more than to fall in love with a boy and lay in bed with him while we listened to “A Movie Script Ending” and talked about our feelings. Death Cab provided the soundtrack to my adolescent yearnings and even now, when I go through a shitty breakup, I find solace in the mawkish lyrics and over-sweet ideals that only Gibbard can provide.

Last night, looking at the smiling and weeping faces of the young people in the crowd – not a full house, but close enough, pretty impressive considering the group only has a new EP, Narrow Stairs, to promote – it was obvious that Death Cab for Cutie still knows how to pull the right heartstrings. The band played in front of a huge screen that flashed images of falling rose petals – or were those red blood cells? Either way, we were being promised something romantic and deep. It felt like prom, or how I imagine prom would’ve felt; I didn’t have a date so I didn’t go. Am I this band’s target demographic or what? And, despite the florid emotion on display, the band rocked, hard.

Gibbard sings a lot about movies, like during “Why You’d Want to Live Here” when he mentions motion picture actors, and in “Clark Gable“, a song by his other band, the Postal Service, where he sings “I’ve been waiting since birth to find/A love that would look and sound like a movie.” Last night, everyone in the crowd was a willing actor, ready to pretend for the sake of the romance. Sure there was schmaltz, like when Gibbard said, “This song is about wildfires, and the flames look like this–” then proceeded to sway his arms back and forth until the crowd joined him in a rippling, three-hankie salute to the human condition; but we wanted the schmaltz!

For the first encore, Gibbard came onstage for a solo rendition of “I Will Follow You Into the Dark”, and my heart broke as I watched the deeply serious high school couples cling to each other and whisper lyrics like wedding vows into each others’ ears. The double encore of the swooning “Soul Meets Body” and the rousing anthemÂ  ‘Transatlanticism” elicited joyous, uninhibited twirling from the gaggles of girls who felt that much closer to the voice in their headphones. If you’re looking for a love that looks and sounds like a movie then you’d best be getting to the open casting call that is a Death Cab show – emoting is encouraged!

3 responses to “Death Cab for Cutie at the Pacific Coliseum”