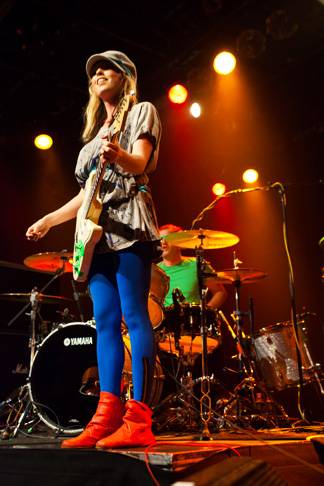 The songs on The Ting Tings‘ debut might sound like happy-go-lucky pop, but listen to the lyrics and you’ll definitely hear an edge, if not a chip. It’s a holdover from the two musicians’ previous experience with the music industry, when Katie White and Jules De Martino were part of a band called Eskiimo. After that group split, the vocalist/guitarist and drummer, friends dating back to pre-Eskiimo days, almost gave up on music for good. But the two licked their wounds, wrote some songs, threw a few promotional parties, and eventually pressed their own copies of a single, “Great DJ”.

The breakout success last year of that song, as well as “That’s Not My Name” and We Started Nothing, the (Sony) debut, has made The Ting Tings one of those unlikely stories that makes even the most jaded pop music fan sit up and take notice. Here’s a band whose tunes – not just catchy but smart and sassy – just about everyone likes. The chemistry between White and De Martino, meanwhile, has made the live show a must-see. De Martino called from a St. Louis tour stop, and answered our questions, kind of… but he definitely talked. 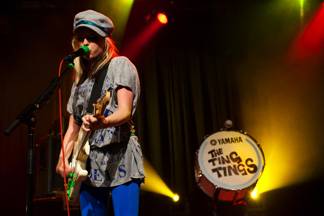 Shawn Conner: How has the show changed as the two of you have become more adept at playing as a two-piece?

Jules De Martino: We’ve been signed to a major record label and obviously we have all these opportunities to go around the world and play all these gigs, these opportunities that open daily. But we like to keep things very much in hand. We do our own artwork, we produced our own album. The two of us onstage have an enormous amount of energy. It’s something about the energy we have that makes us feel fulfilled when we come off stage.

I think the worst thing about this industry is when you start feeling unfulfilled, whether or not you’re earning any money. Selling records, going around the world, and people start saying “you can do this advert, it’s going to bring in so many thousands of pounds, and someone’s offered you this, you can stay at the penthouse suite.” It’s really easy to go, “That would be really good.” But it’s one of the decisions we’ve made, we’re a pop band but it’s kind of run like an indie band. We do everything ourselves. Sometimes that frustrates labels or the management, because they want you to be this huge thing overnight.

SC: When you started out, you were just traveling around in Katie’s Mini, right?

JDM: That’s right. Now we have a tour bus, and seven people who travel with us. Katie has a guitar tech but that’s because most of the day we’re doing promo and we don’t have time to set up. They [the crew] are really an integral part of what we do. They’re great people. Katie’s got a female guitar, she was adamant about that. Obviously in this business when you go to crew it’s all men, sitting on the bus burping and farting. So she was adamant about getting a girl to come on tour with us. She [the guitar tech] is kind of more of a boy than a girl. She lifts really heavy stuff.

SC: You had an unpleasant experience with the music industry before signing to Sony with the Ting Tings.

JDM: The last time, it went wrong in many ways. In fact it inspired semi-consciously a lot of the material we wrote lyrically. A lot of people think these are out and out pop songs, which they are, but they are written about our past experience. “That’s Not My Name” is about feeling invisible, not being heard. When we were signed as a band [Eskiimo] before, the first thing they [the record company] projected – we had a lot of talent and were making some great music – was how far Kate would go in the sense of men’s magazines, revealing herself and being sexual.

I remember clearly we sat at the meeting, and she’d put together some ideas, because she’d done fashion design, and they literally pushed that aside, and focused on how raunchy Katie was prepared to be. As if the only thing we wanted was to get a record deal. I remember looking at Katie and she had her middle finger stuck up and I was thinking, “Oh no. She’s lost it.” But she was like, “Fuck you guys, I’ve spent three days putting this scrapbook together and you haven’t even looked at it. All you’ve done is come into this meeting thinking I’m gonna go in these trash magazines.” I remember we got back on the train back to Manchester, and the other members in the band were going “Katie, you’ve got to be more diplomatic.” And I was like, “No, not at all.” And two-three weeks later we got a call saying we got dropped. 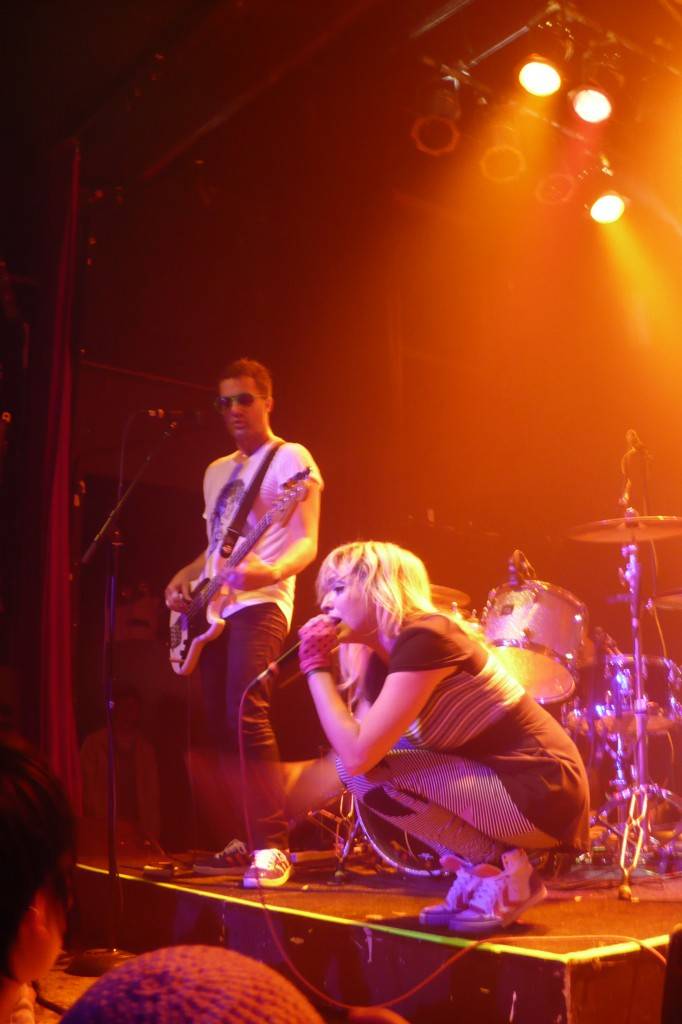 SC: Obviously that experience made you determined to call the shots, from where you tour to the artwork to the merchandise.

JDM: We’ve done some wild stuff with our merch, especially when we started. We had white T-shirts and pots of paint, and we were doing our own merch after the gig, and we’d sign the T-shirts or tell people to put them on and throw paint at them, or put handprints or footprints on them. I studied fine art, and Katie got involved with a lot of fashion design students in Manchester, and she got fascinated by fashion. So she was cutting her own clothes. The funniest thing, when we broke through, there was a Vivienne Westwood dress that came through for her to wear to an event. And I was like, “Wow, that’s incredible, it’s worth a fortune, God you’re so lucky.” I’m the drummer, no one ever gives me designer stuff. And I went out and when I came back to the studio and she’d cut it to pieces. She’d put on all these little teapot doilies on it. At the time I was like, “You’re a fucking crazy bitch. You should’ve put it on eBay.”

But it did look good. And that’s what she’s always done. We still try to do that. Those wallets, it takes ages to make one, we get a guy in London to make them. We’ve just said when you’ve got time, make them. We did a party in Manchester recently, and it turned into a huge paint fight. My drum kit and the guitars got covered, and they look just phenomenal, like something off the first Stone Roses record. That’s what we love doing, is having a connection with the audience, getting a reaction. We have two T-shirt designs at the moment, designed by a Swedish girl. We ran a competition, we want someone to come up with a great T-shirt. So we commission her. She started a website now, designing T-shirts. SHe was just a student. We love that, it’s so much more refreshing than going to a company that designs T-shirts.

SC: You’ve got the one album out, and bunch of remixes and a few live tracks. What would you recommend if I had a few extra bucks to download some additional Ting Tings music?

SC: What about the Live in Soho tracks?

One response to “The Ting Tings’ Jules De Martino”