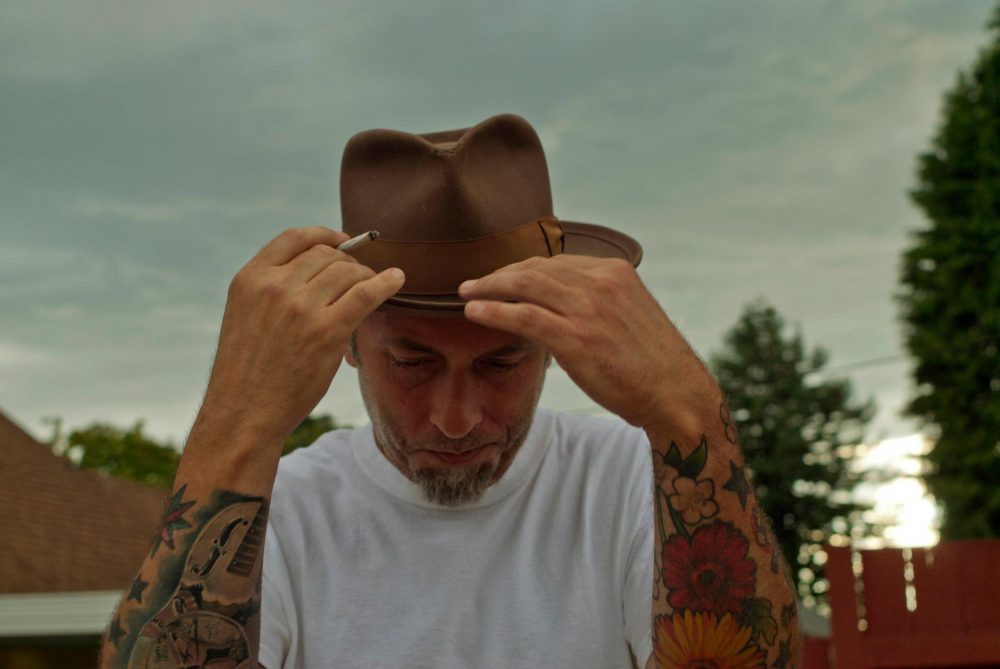 Kelly Joe Phelps passed away May 31. The American musician was 62.

Kelly Joe Phelps died. A musical hero of mine. That term is thrown around a lot and it’s easy to apply to towering monoliths like Springsteen and Cohen. And Kelly Joe had monolith status in his own way, because of his singular talent—but for me, it felt somehow more personal.

I first saw him—no, heard him—at Vancouver Folk Fest, my first time there, I think 2003. I heard his voice. There’s a review somewhere that describes it as something like “Kentucky bourbon on a rocky creekbed”. Its roughness belied a pitch perfection and a magnet for melody that you could tell was at least semi-improvisational. It wasn’t until I bought a couple of albums, though, that I started to realize what was going on with that insane guitar playing.

For the next few years, I’d go see Kelly Joe play wherever and whenever I could. I drove down to Shoreline College, outside Seattle, which is where I first met him. Four years in a row I went to his February Capilano College concert in North Vancouver and brought a bigger entourage with me each time—people HAD to see this guy. And even though I am a shy person, I was compelled to slip backstage after each show and knock on his dressing room door. And each time he would be definitively gracious and humble while I struggled to find something to talk about, just so I could be around him for a couple of minutes.

A year or two after that my buddy and I drove to Penticton in the crux of winter to see Kelly Joe at the Dream Cafe. To our delight, he was amenable to drinking with us at the bar afterwards, where we shot shots and shot the shit and when he found out we were sleeping in our van that night he not only bought our drinks but offered us his hotel room floor (which we couldn’t accept). I can’t imagine being that kind, especially on tour.

These years, the mid-2000s, happened to be formative for me. I’d started taking songwriting seriously, writing and practising into the wee hours every night. I’d bought a dobro guitar and Kelly Joe’s instructional DVD to chip away at the tip of the iceberg of his playing technique. Not that I ever got very far. I started playing my first solo gigs– and wouldn’t you know it, most of them were with 1 regular acoustic and 1 bridge-raised acoustic for laying down lap-style, just like Kelly Joe.

His PLAYING. His artistry. Listen to a Kelly Joe recording and you’re listening to lightning in a bottle. He’s improvising and creating with every lick, note and vocal intonation of his live-off-the-floor takes. He mutters like Glenn Gould, lost in the stars of the moment. And though he could interpret a classic like nobody else (his “Goodnight Irene” is perfect and untouchable), his original songs held the most inspiration for me. I read somewhere that he’d write pages and pages of prose before sculpting out his song lyrics from them. A lot of those lyrics are almost a mosaic of images and thoughts and they’d refract a slightly different light every time I came back to one song or another. And there were always a few banger lines that would stick with you, like: “Getting older ain’t a party, it is a god damn play”.

So amongst the Dylans and the Cohens, I had this shining light of inspiration. I would emulate Kelly Joe at my coffee shop gigs, trying in my own way to be improvisational in some of my song performances, singing out of the side of my mouth like him (which I still sometimes do), even writing a few mosaic-lyric songs. Somewhere in those years, when I had some gigs under my belt and was talking to labels and tracking songs in fancy studios for the very first time, Kelly Joe gave me his email address (BIG mistake!), and we had about a year and a half of sporadic
correspondence in ’07/08. Reading through these, I see myself just the fanboy, trying to play it cool. Kelly Joe is just generous and real. He would listen to the demo CDs I’d given him and be kind with praise. He’d give me feedback on some lyric drafts. He’d tell me where he was, “humpin’ through the hills of Wyoming”; or when lyrics weren’t coming easy for him he confessed that he “couldn’t write word one to save my life or anyone else’s but the guitars are screaming to be played, so I’m lettin’ ’em scream”. For me, it was like having a musical godfather. For him, it was probably just another wide-eyed kid trying to be a troubadour.

I think the last time I saw Kelly Joe in person must have been at Malkin Bowl in Vancouver in 2007 when he was opening for Lucinda Williams and had emailed me out of the blue to offer a couple of comp tickets to the show. I took my mom and I of course slipped backstage afterwards, where we chatted a little (and I saddled him with another CD of mine). Our correspondence dried up in the year after that and by 2011 my emails were bouncing back. In 2014, I toured Europe for the first time with The Fugitives, and we seemed to be playing some of the same clubs he had played– his posters were on the walls. One German promoter told me Kelly Joe had cancelled his last tour, that he thought maybe he was going through a pretty rough patch. This put a lump in my throat and I searched online for more information, to no avail, and continued to check all the sites I could think of. But there was never any news.

Until late 2018. I was seated near Steve Dawson (a longtime friend/collaborator/producer of Kelly Joe’s) at a folk awards thing outside of Calgary. I’d met Steve a handful of times though he likely didn’t know who I was. But I knew I had to ask him. So I drained my beer and jumped in. ‘Hey man, any idea what’s going on with Kelly Joe these days?’ Steve tells me the last time he’d spoken with the man, a little while ago, it sounded like he’d made up his mind to take a bit of a break from music. That he seemed in an ok place but was looking for something different– he was even thinking about becoming a park ranger. But Steve also told me that in his recent cruising of vintage guitar vendor websites he’d spotted a guitar he knew well– it was the last guitar he knew Kelly Joe still owned. And it was up for sale.

This all kind of rained down on me. I went for a long drive, listened to all his records, read through all our old emails. I even sat down and wrote a song called “Kelly Joe, I Heard You Sold Your Last Guitar”. But of course I was never in contact with him again.
And then yesterday the news came through– Kelly Joe Phelps has died.

Selfishly, I’d always hoped he’d get to hear that song I wrote for him someday. Selfishly, I’d always kept a candle lit that I’d get to see him play again somewhere, because to see him play was to witness lightning in a bottle. Kelly Joe was a friend to me when he didn’t have to be. He changed and shaped my idea of what songwriting and solo performing could be. His talent and skill remained (and will remain) forever untouchable, even though he was as humble and honest a human as I have ever met. Last night my partner Marlene, as she scrolled through an
endless Twitter feed of Kelly Joe posts mentioning how “under-appreciated” he was, remarked: “This must be the most appreciated under-appreciated artist in history.”

I hope some part of Kelly Joe knew what his music meant to people. I would literally not be the same without it and without him.

* * * * *
If you’ve never listened to Kelly Joe and would like to, then here are some of my personal favourite tracks and albums.

“Roll Away the Stone” (from the album of the same name): When I worked at a record store for a couple of years in the Triassic Period, I never had my “staff picks” wall missing a Kelly Joe CD. (I was personally responsible for a 700 per cent increase in KJP record sales at the Marine Drive A&B Sound location.) If someone was interested, I would bring them to a listening station and cue up this song, the first/title
track off his second album. It always made a sale. Put on headphones and just listen. If you aren’t craving more Kelly Joe after hearing this song, then he’s not for you.

“Wandering Away” (from the album Shine-Eyed Mister Zen): This song got me through the first night of my first heartbreak. On repeated repeat. KJP’s lay-steel playing on this one is typically sublime, it’s the one that made me want to start learning a bit of lap-steel myself. I could eventually manage a basic version of this tune.

“Tommy” (from the album Sky Like A Broken Clock): I can remember Kelly Joe sardonically referring to this song as his “hit”. Pretty
straightforward picking considering it’s him, but the story (and the way he sings it) is so sweet and sad.

“Goodnight Irene “(from the album Shine-Eyed Mister Zen): Every single note, both sung and slid, is perfect in this performance. And it sounds like he’s playing three guitars at once. For my money, there will never be a better version of this tune.

“Cardboard Box of Batteries (from the album Slingshot Professionals): This tune is a good example of the “mosaic lyrics” thing I was talking about. Different lines hit me in different ways. This recording is special because it has the legendary Bill Frisell doing haunting tape-loop guitar fx stuff on it.

“Waiting For Marty” (from the album Tap the Red Cane Whirlwind): Tap the Red Cane Whirlwind is a stunning concert album, but it’s a little harder to find (it’s not on my Tidal, anyway). Even though all Kelly Joe’s recordings are “live” in a way, since he was always going live-off-the-floor, there’s something extra about a performance with an audience in the house. So even though I love the album version, this live version is just next level. Hearing Kelly Joe work out ideas on the spot is pure magic and hearing his intention sung behind every lyric line of the song gives them so much more weight.

“Capman Bootman” (from the album Shine-Eyed Mister Zen): To me, this tune is the musical version of an Impressionist self-portrait. Frenetic virtuoso guitar playing and lyric sketches describing himself, the flannel-armed “Capman Bootman”, whipping the high note frantic.

“Hard Time Killin Floor Blues” (from the album Tap the Red Cane Whirlwind): I think KJP’s interpretation of this Skip James stalwart is about nine minutes long. It’s utterly entrancing. (He originally did it on his debut album Lead Me On but, again, something about hearing it in front of an audience is a whole new level of special sauce).