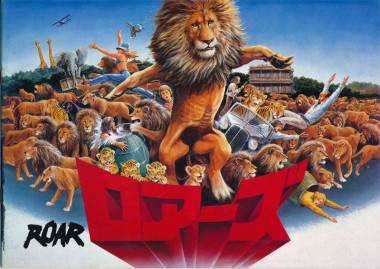 Over 150 tigers, lions, and assorted big cats star in the 1981 film Roar, which screens at the Rio Theatre in Vancouver this Friday night. None of the animals were hurt during filming, but the cast and crew definitely were.

There were over 70 injuries recorded during the shoot, including one inflicted on a teenage Melanie Griffith – who reportedly needed facial reconstruction surgery after a run-in with a lion – and cinematographer and Speed director Jan de Bont, who had the back of his scalp clawed open, and attached back with over 200 stitches.

Even though the production of Roar is horrific, the film itself is a wild big-screen beast that walks the finest line between being deeply unsettling and absurdly hilarious. It plays like a wholesome Disney family flick that threatens to turn into Faces Of Death at any given moment. 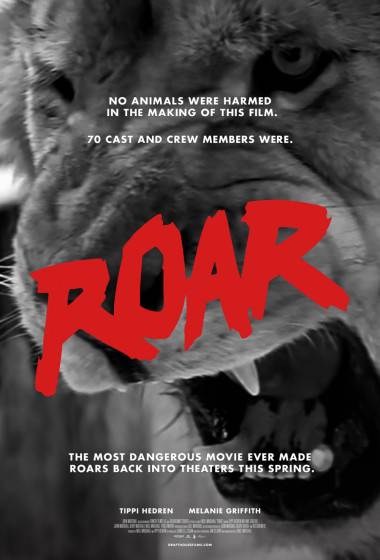 On its initial theatrical release, following 11 years of production, Variety called the film “the most disaster-plagued film in the history of Hollywood,”Â Â and it was aÂ critical and financial dud. That Roar vanished from the cinematic collective conscious so easily is kind of astonishing, considering itsÂ non-stop barrage of unbelievable, stunning wild-life footage, as well as scenes where the following happen: a teenage Griffiths gets mauled by a lion; two grown men drive in a convertible jeep with two very grown-up tigers; and a lion cub learns to skateboard.

Thanks to Drafthouse Films, the film is being re-released,Â along with the tag-lineÂ “the most dangerous movie ever made.”Â The distributor has found gold in lost and over-looked cult classics, including Miami Connection,Â an ‘80s rock ‘n’ roll ninja rock musical, and The Visitor, the cosmic horror movie that features John Huston, a bloodthirsty falcon, and basketball. All three films couldn’t be more different, but Roar continues the strong wtfÂ vibe.

The plot of Roar is threadbare, and for good reason: everyone is clearly just trying not to get maimed. The key to the movie is Noel Marshall, who directs and stars in the film, along with his stepdaughter Griffiths, his two sons, and his then-wife Tippi Hedren. (The two divorced shortly after the release of the film.)

Set in Africa, it was filmed at Hedren and Marshall’s family compound in Los Angeles, where the 150 wild animals lived (and which has been converted into the Shambala Preserve). 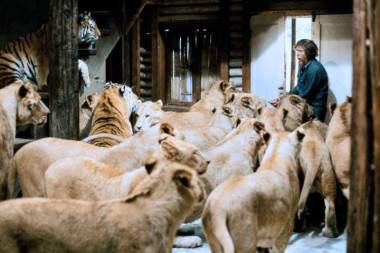 The denim-clad Marshall is like aÂ less-tragic version of Timothy Treadwell, the Grizzly Man, and only-slightly-less crazier version of Nick Nolte’s mugshot, as he manically bounces from scene to scene, letting the big cats own every frame of the film -Â and even interjecting himself in the middle of a lion-on-lion scrap in the opening of the film. Roar is full of wild energy and it’s only fitting that the big cats even share the writing and directing credit.

Roar is a weird cinematic endangered species that wouldn’t and shouldn’t be ever be made today, but can and should be appreciated on the big screen.Â While nothing on-screen matches the horrors and chaos suffered by those who made it – Griffiths won’t talk about the film, and neither will be de Bont -Â the film still feels like a weird, dangerous artifact.