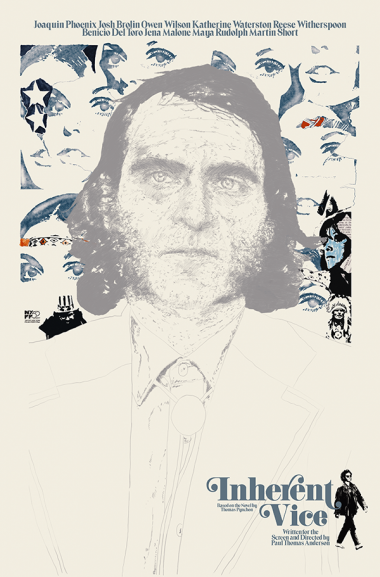 Two days after seeing itÂ and I’m still coming down from a contact high after seeing Inherent Vice, the latest film from auteur Paul Thomas Anderson. It’s a deeply weird film that probably shouldn’t exist, but I’m very glad it does.

Set in the 1970 fictional beach town of Gordita Beach (based on the real Manhattan Beach outside of Los Angeles), the movie featuresÂ Joaquin PhoenixÂ as Larry “Doc” Sportello, a mutton-chopped, mumbling pothead private detective with a full case load that keeps growing throughout the film’s hazy two-and-a-half hours. He’s searching for his missing ex-girlfriend, as well as a presumed-dead surf band saxophonist and a real estate developer, for starters. The clouds of paranoia and pot grow around the disappearances, pointing to a clandestine secret organization (or schooner) called The Golden Fang. 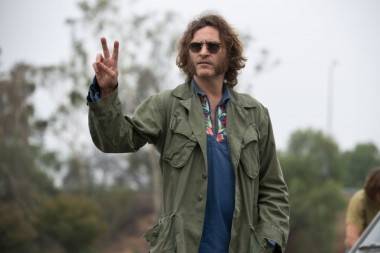 But before I go any further, I should throw in a disclaimer: I’ve been waiting for this film the moment I heard Anderson was going to be adapting Pynchon’s novel. I’m automatically waiting in line for any film the directorÂ puts out and Pynchon is probably my favourite novelist. Since Magnolia, Anderson’s filmography has been a series of hard left turns, but each film has been fantastic and daring, from Punch Drunk Love – the dark comedy/love story starring Adam SandlerÂ – to the oil-black brutality of There Will Be Blood to the enigmatic The Master. The decision to turn Pynchon’s dense, paranoid prose into a film is gutsy, to say the least. Even if the movie was a flat-out failure (which it isn’t!), it’d be more interesting than 98 percent of the films in the theatres in the last decade. 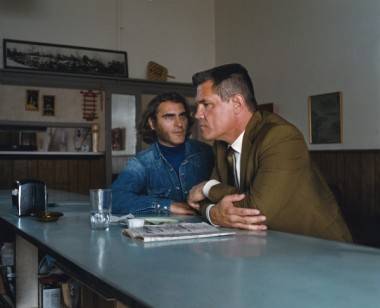 In 2012’sÂ The Master, Anderson’s last film, Phoenix’s Freddy Quell was a captivating powder keg waiting to blow up. In Inherent Vice, Phoenix’s Doc is an almost inverse role. Here he’s a stoned Fletch-type, going undercover, reacting to a world that isÂ burning out around him, with aÂ stacked cast of heavy hitters and newcomers who memorably bring Pynchon’s oddball supporting cast to life. Owen Wilson, Benicio Del Toro, Martin Short and Joanna Newsom are a few of the standouts. Newsom plays Doc’s spiritual advisor and is the film’s narrator, bringing Pynchon’s elegant and hilarious prose to life in a quiet hippie voiceover, but also underscoring the film’s biggest achievement: Pynchon’s novel acts as sheet music that PTA plays faithfully, creating a jam that plays to both creators’ visions.

Inherent Vice isn’t the most challenging of Pynchon’s work. It’s mostly a hard-boiled private eye story baked under the 1970 Los Angeles sunÂ but whichÂ nonethelessÂ sings with the author’s ability to amp up paranoia with equal parts fear and humour. That’s still an impressive feat to faithfully adapt that to film. Even though scenes are shuffled, and obvious changes are made, the film absolutely captures the spirit of Pynchon’s story and setting. Anderson opts to rip almost all of the film’s dialogue straight from the page and layers stunning shots with Jonny Greenwood’s superb score and excellent soundtrack. Even when the film sputters, it’s filled with cinematography that looks it was captured with a time machine. 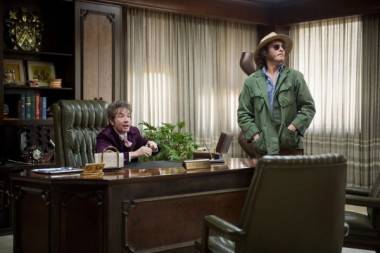 Another notable thing about Inherent Vice is that it doesn’t feel like any of the director’sÂ previous films -Â not even Boogie Nights, which takes place in a close enough time and proximity. But it still feels like a Paul Thomas Anderson film: a dangerous, confident, beautiful and emotional ride about the groovy waves of memory, man.