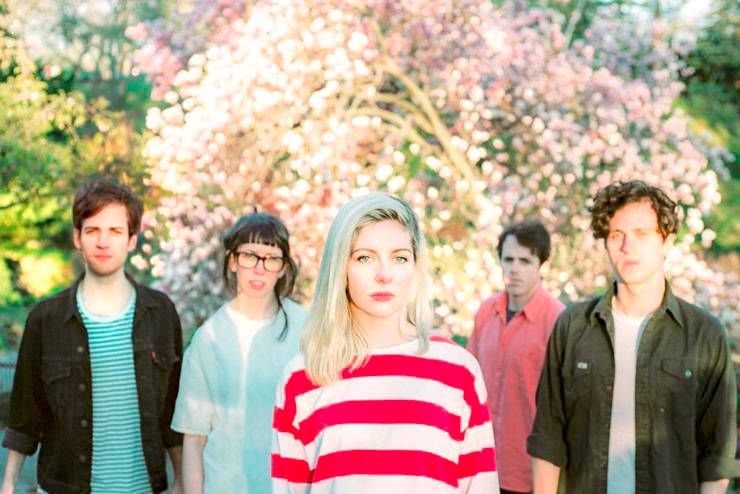 Barely one week after their debut self-titled album was named CBC Music’s Canadian record of the year, and only day after Paste Magazine placed “Archie, Marry Me” third on their list of the year’s 50 best songs, Toronto’s Alvvays had a lot to live up to for their first Vancouver performance. A steady stream of press and critical accolades set a ridiculously high bar for the young quintet leading up to their show at the Biltmore last Wednesday. The night’s expectations were met, but not exceeded.

The truly memorable act of the night was openerÂ Absolutely Free, another Toronto bandÂ touring in support of their debut full-length self-titled album (produced by Fucked Up‘s Mike Haliechuck). Vibrant and brimming with contagious energy, drummer Moshe RozenbergÂ forged the path for theÂ trio’sÂ fast-paced indie-rock numbers, which were reminiscent of San Francisco’s Fresh & Onlys‘. Unable toÂ remain seated, RozenbergÂ bouncedÂ his entire lithe body into his drumming. Guitarist/singerÂ Matt King also wasn’t content to be stationed behind the microphone, and utilized an extra pair of drumsticks to bang out a few beats on his bandmate’s instrument positioned within arm’s-reach to his right. All three members, including bassist Michael Claxton, were clad in button-down shirts, which beliedÂ their fun, punk-y energy.

Physically, at least, Alvvays is dwarfed by their growing reputation and hype. Petite singer/guitarist Molly Rankin is a self-admitted “tiny person” – a fact she plainly and unabashedly stated mid-show preceding a polite appeal to the audience to switch places so that those of similar stature could see the stage. Understatedly dressed in an oversized t-shirt, jeans and sneakers – a common look amongst the band members – Rankin’s shock of red lipstick was coordinated with her cherry red guitar. She sang confidently and played watchfully, concentrating on guitarist Alec O’Hanley‘s strumming during breaks from singing.

About half-way into their set, Rankin paused for an apt dedication of the aforementioned hit song “Archie, Marry Me” to Nardwuar the Human Serviette, if he happened to be in the audience. The venue was too packed even to discern the local music celebrity’s signature plaid outfit.

Surprisingly, one name hasn’t been batted around with more frequency in press in relation to Alvvays isÂ indie surf pop-rocker Bethany Consentino. Although the vocal similarity between the Best Coast singer and Alvvays frontwoman Rankin is strikingly apparent on their LP, the live performance merits less comparison. Whereas Best Coast has an undeniably lackadaisical West Coast vibe and affectation, Alvvays’ presence and energy is more proactive – reminiscent of early Vivian Girls or Veronica Falls. Playing live, the quintetÂ possesses an enviable youthfulness and clear-headed, focused sound that is a refreshing change from the redundant stoner-slacker subgenre of the indie surf rock scene.

There was only time for a quick breath before Rankin, O’Hanley, bassist Brian Murphy, drummer Phil MacIsaac, and keyboardist Kerri MacLellan returned to the stage for their two-song encore burst of energy. Overall, Alvvays pleased the full venue with a tight, upbeat set of songs off July’s release and a couple of new as of yet unreleased numbers, including a highspeed nugget of Vivian Girls-esque surf-rock number during their encore.